Versatility is valued by the Cincinnati Reds.

That’s why they have Josh VanMeter playing multiple positions for the Double-A Pensacola Blue Wahoos.

“I take more than one glove to the park everyday,” says VanMeter, a 2013 Norwell High School graduate who has played third base, left field and first base in his last 10 games and is listed on his MiLB.com profile as a second baseman. “It’s good for my career to play many different spots. I’ve definitely enjoyed it.”

Dick Schofield, a former major league shortstop, is Pensacola’s defensive and third base coach and has helped VanMeter with positioning and attacking the ball.

While guiding Pensacola into a Southern League playoff berth, Blue Wahoos manager Pat Kelly has continued to get at-bats for lefty-swinging VanMeter.

“(Kelly) likes the way I go about my business,” says VanMeter, a 5-foot-11, 165-pounder. “I’m a guy who plays the game the right way. I give you competitive at-bats day in and day out.

“Show up and compete. That’s a big thing in the game of baseball.”

With Gookie Dawkins as his hitting coach, VanMeter says he is improving his knowledge of the strike zone.

“You learn to lay off the tough pitches, especially with two strikes,” says VanMeter, 22. “It’s about not missing good pitches to hit.”

VanMeter was traded by the San Diego Padres to the Reds organization Dec. 9, 2016 and was told by agent Joe Speed how that would increase his opportunities. He was selected by San Diego in the fifth round of the 2013 Major League Baseball First-Year Player Draft.

He had committed to play at Illinois State University, but decided to go pro and signed with area scout Mark Conner (now director of scouting for the Padres).

“The opportunity to go straight into pro baseball was something I couldn’t pass up,” says VanMeter. “I thought I was mentally ready to play baseball everyday

“I promised my mom after I got drafted I would someday get my degree.”

Josh is the middle child of Greg and Amy VanMeter. Older brother Tyler played high school soccer. Younger sister Carlie was a cheerleader at Norwell and is now on the cheer squad at the University of Saint Francis in Fort Wayne.

After closing his record-setting Norwell career with a Class 3A Indiana state championship, Josh VanMeter played for the Arizona League Padres that summer before spending all of 2014 with the Low Class-A Fort Wayne TinCaps.

In April 2015, VanMeter suffered a leg injury while turning a double play at second base. Playing at Fort Wayne’s Parkview Field, he collided with Lansing Lugnuts runner Rowdy Tellez. The result was a broken left fibula and months of grueling physical rehabilitation.

VanMeter walked on an aqua treadmill with the water level lowered every two days. He underwent painful deep tissue massage stop the build-up scar tissue. He did end up playing 25 games in Fort Wayne in 2015 before moving on to High Class-A Lake Elsinore then Double-A San Antonio as well as the Arizona Fall League in 2016.

So popular was VanMeter — the first player from northeast Indiana to play for the TinCaps — that president Mike Nutter decided to honor the player with his own bobblehead.

“It was pretty special,” says VanMeter. “Pat Kelly made a big deal about it in spring training. Getting to play in Fort Wayne was special that year and a half.”

“That was a great experience,” says Josh VanMeter. “(Delagarza) had a huge impact on me. He taught me to be a man and made me the player I am today. I wouldn’t trade any of that for the world.”

Josh’s profile in the baseball universe raised with his MVP performance while playing fall ball for the Andy Slack-coached Reds Midwest Scout Team at the Perfect Game Kernels Foundation tournament in Cedar Rapids, Iowa, in 2012.

Playing for coach Andy McClain at Norwell, three-time all-stater VanMeter set school records for career doubles (44) and single-season pitching wins (14) and walks (41) while tying for single-season home runs (9) in 2013 and single-season hits (53) and doubles (20) in 2011. The win record had been held by Jarrod Parker, who went on to pitch in the big leagues.

“(McClain) is always there for me,” says VanMeter. “He’s just a great person. He has held me accountable.”

“We knew what we had to do to win a state championship,” says VanMeter, who scored both runs on hits by Jonah Patten in a 2-1 win against Jasper. “He gave us a lot of freedom and that was good for us.”

With VanMeter at point guard, Norwell was a 3A basketball state runner-up in 2012. He went on to become a school record holder for 3-pointers, No. 2 in all-time scoring and third in assists.

“High school with him was a lot of fun,” says Greg VanMeter, who was calling much of action on the internet for www.wellscountyvoice.com. The site covers Knights football, boys basketball, girls basketball and baseball games. 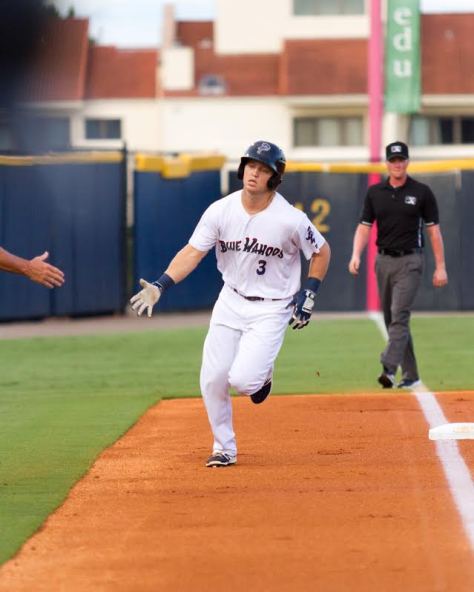