Josh Stephens has gotten the call up to Triple-A baseball.

Stephens, a Goshen, Ind., native who graduated from Indiana University with a Sports Marketing and Management degree in May 2019, has accepted a stadium operations manager position with the Iowa Cubs, the top affiliate of the Chicago Cubs.

A 2015 graduate of Fairfield Junior/Senior High School in Benton, Ind., where he played baseball and basketball, Stephens returns to the team where he served two internships.

After graduation, Stephens went to work as stadium operations assistant with the Low Class-A South Bend Cubs. He worked for that franchise for a month before being offered the job in Des Moines, Iowa.

“It’s a good opportunity at such a young age,” says Stephens, 23. “I’m glad they reached out to me.

Baseball has always been important in the Stephens family. Bryan and Holly often planned their vacations with Josh and younger sister Jenna around baseball.

When Josh was 6, he and his father set a goal of attending games at all 30 Major League Baseball parks. When Josh was 17, that goal was achieved.

“Sometimes sister and mom would tag along if national parks were involved,” says Stephens.

A lifelong Cubs fan, he ranks Wrigley Field as his favorite MLB venue.

“As a Cubs fan, I’m pretty loyal to Wrigley,” says Stephens of park in Chicago’s north side. “It’s the nostalgia.”

His next two choices are Fenway Park in Boston and PNC Park in Pittsburgh.

Stephens has not been to too many minor league parks.

“I really like Four Winds (Field in South Bend),” says Stephens. “The (seating on the) roof tops are really cool.”

Principal Park is the home of the Iowa Cubs.

The way Iowa does it, stadium operations has a manager, three directors and about 25 interns during the season.

Stadium ops is responsible for all facility repairs and for executing off-season events like weddings and concerts.

During the season, game day is broken into three parts.

The morning shift cleans the seating bowl with blowers and hoses.

“I like being outside and doing the grit work,” says Stephens, who has worked on the golf course grounds crew at Maplecrest Country Club in Goshen. “You get to learn people’s stories. You’re not always behind the desk.”

Stephens says it always helps Iowa when a major leaguer comes to Iowa on a rehabilitation assignment.

“We get more fans,” says Stephens.

After the game, stadium operations begins preparation for the next day and there’s trash removal and lock-up.

One popular post-game promotion is offering fans the opportunity to come on the field watch “Field of Dreams” on the video board.

After all this is Iowa. One one family vacation, the Stephens landed at the site where the 1989 movie was shot near Dyersville. It just so happened that star Kevin Costner was there for a reunion and a young Josh got to play catch with “Ray Kinsella.”

Stephens is due to return to Iowa the week of Feb. 17. Meanwhile, he and fiancee Lauren Lehr (a 2015 Goshen High School graduate and kindergarten teacher at Prairie View Elementary in Goshen) are finalizing plans for their June wedding at Tippecanoe Lake Country Club in Leesburg, Ind.

The Iowa Cubs are scheduled to open the home portion of the 2020 Pacific Coast League season April 14.

Before then, stadium operations will be performing tasks like turning on the plumbing, removing snow and putting up signage on the outfield wall. 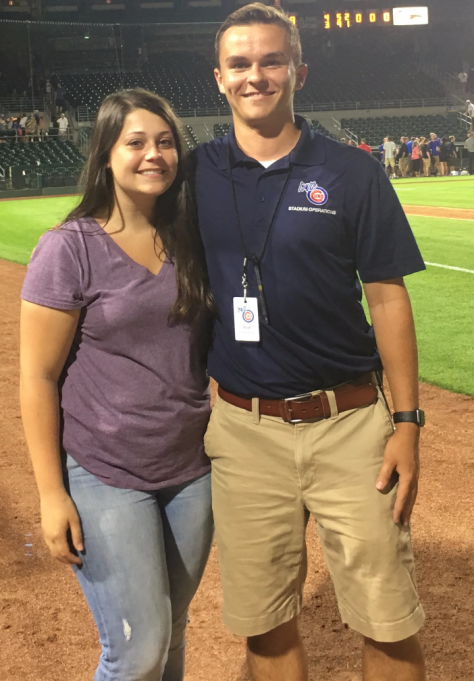 Lauren Lehr (left) and Josh Stephens share a moment at Principal Park in Des Moines, Iowa. Stephens has been hired by the Iowa Cubs as a stadium operations manager. Lehr and Stephens, both of Goshen, Ind., are engaged. The wedding is scheduled for June 2020.