As Mark DeLaGarza sees it, there are two paths for travel baseball organizations.

Some like the game but are not that intense about it. To DeLaGarza, that describes 80 percent of Indiana teams.

The rest are serious about competition and learning.

“I’m in that 20 percent,” says DeLaGarza, who founded the Summit City Sluggers in 1996. “We try to do things right and develop players.”

Among the many alumni to play in college or beyond are major leaguers Kevin Kiermaier and Jarrod Parker.

DeLaGarza, who runs the Sluggers with Greg VanMeter and Steve Devine, says there are three reasons that players are in summer baseball — they want to get to the next level; they wish to get better; or they play because their parents say they must get a job if they don’t.

“I can deal with two out of the three,” says DeLaGarza.

At 57, DeLaGarza has been involved with baseball as a player or coach since age 10. He moved from Janesville, Wis., to Fort Wayne to follow his career at General Motors. He was with GM for 33 years.

Besides the Sluggers, he has been a high school head coach at Southern Wells and an assistant at Norwell (where sons Nick and Andy played) and Columbia City as well as an assistant at Manchester University. He has also led the Twins Scout teams in fall baseball and has served as an associate scout for the Minnesota Twins (he still counts supervisor Bill Milos as a good friend in the game) and New York Mets.

The Sluggers started with one team and moved from 12U to 18U as Andy DeLaGarza and his teammates got older. When Andy went on to college baseball (at Coastal Carolina), Mark was approached about keeping it going and Summit City hit the re-set button at 15U.

Eventually, younger squads were added to a growing group and the emphasis continued to be getting players ready for college ball.

“Five or six years ago, I realized that kids stay committed to the same (travel ball) program,” says DeLaGarza. “If you don’t get them when they’re young, you might not get them at all.”

Today, the Sluggers field seven squads (12U, 13U, 14U, 15U, 16U, 17U and College). Younger teams are just beginning their season of 45 to 60 games with older squads joining in for about 40 contests as the high school and college seasons are concluding.

Why so many games?

“It’s a necessary thing,” says DeLaGarza. “Kids don’t know how to play unless they play. They need to play to learn the game. You don’t hear people say you’re doing too many math or spelling problems.

“In Indiana, we can’t play too much.”

With games at Huntington University, Indiana Tech, Indiana Wesleyan, Manchester and Saint Francis, college squads play in the Indiana Summer Collegiate League (other squads for 2017 are to be the Kekiongas, Panthers and Flippin’ Frogs). The league offers no housing and is made up mostly of area athletes. Cost is $500 per player.

Fees can be defrayed for other players with optional monthly fundraisers.

Summit City winds up the season in late July and holds tryouts for the next season in August at Homier Park in Huntington (site of the Sluggers’ Standing Up To Cancer Tournament for ages U9 to U14 June 9-11).

“If we wait until September or October, other organizations take the players,” says DeLaGarza. “We’ll play games every weekend in September.”

For older teams, many of those games are against collegiate squads.

“It challenges them and gives them the chance to see how good college players are,” says DeLaGarza. “We’re trying to educate them. But we spend most of time educating parents. I tell those going on spring break to get off the beach and go see a college baseball game (to see what it’s all about).”

During the fall and winter, the Sluggers train at a facility in Huntington.

DeLaGarza coaches the 15U team. Other current Summit City head coaches are Mark Fisher (12U), Brent Alwine (13U), Matt Stidam (14U), Lance Hershberger (16U), Todd Armstrong (17U) and Lea Selvey (College).

Finding the ones DeLaGarza wants is not always easy. He has found that many high school coaches are tired at the end of their seasons and don’t wish to coach in the summer and fall.

If DeLaGarza had his way, summer baseball needs more direction. One place to start is to have divisions so that top level teams would not be grouped with lower ones at tournaments.

“We’re under the same umbrella and it’s all watered down,” says DeLaGarza. “These dad teams should be in house ball. I don’t mean to sound arrogant.

“We beat someone 22-1 and it does no one any good. That doesn’t help develop a player. The only way to fix it is to have major tournament directors filter the teams they bring in.”

DeLaGarza would like to see more league play where there is time for pregame and postgame routines.

He wishes Indiana would return to more games where younger teams don’t play on high school/college-sized fields before the players are ready, which to him means 15U. That usually means the mound is at 54 feet from the plate and the bases 80 feet apart (as opposed to 60 feet, 6 inches and 90 feet).

Since pitchers have a tough time throwing strikes at the longer distance, games tend to be very slow.

DeLaGarza notes that son Andy did not throw a breaking ball until his junior year at Norwell and advises young pitchers to do the same, getting hitters out with location and by changing speeds.

“Fill the strike zone with fastballs on both sides of the plate and see what happens,” says DeLaGarza. 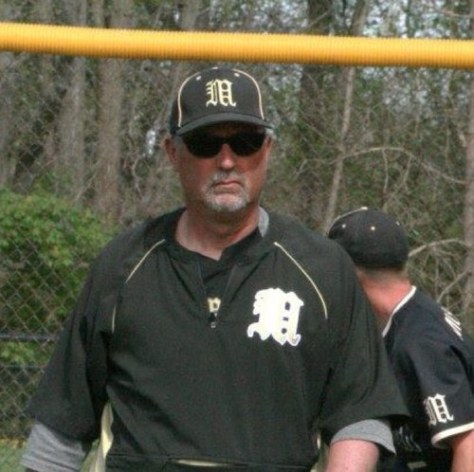 22 thoughts on “Getting players ready for next level what it’s all about for DeLaGarza, Summit City Sluggers”