Then the Washington County, Ind., native came back south and became an educator and a coach at a school just up the road from where he grew up.

Ingram is a 2011 graduate of Salem (Ind.) High School. He had three coaches in four years. The last one was Brett Miller.

The Lions’ two county rivals were West Washington and Eastern (Pekin). His father, Larry Ingram, was head coach at Eastern for 29 seasons, concluding in 2011.

After earning his degree in kinesiology with an emphasis on physical education at Indiana University Purdue University Indianapolis (IUPUI) in 2015, Brent Ingram worked one year each as a teacher only at Mississinewa High School and White River Valley High School.

To his his, he is just the second head baseball coach in the history of the program that was also a teacher.

“That’s a big deal to be able to recruit kids,” says Ingram. “Our numbers are better. We expect to have eight or nine freshmen.”

Ingram took both teaching and coaching positions in 2017-18 and made his father one of his assistants.

“I grew up around a baseball coach and a baseball setting and I loved every minute of it,” says Ingram, who counts Larry Ingram, Tim Barksdale and Lincoln Jones as West Washington assistants.

Barksdale is the former director of the youth league in Campbellsburg and a school board member. Jones teaches business at West Washington. The North Harrison High School graduate pitched for four years at Franklin (Ind.) College.

The 2000 baseball season will be Brent Ingram’s third at the IHSAA Class 1A school of about 290 students.

The first season saw the Senators on the wrong end of many run-rule games. That only happened a couple times last spring.

“They’ve improved,” says Ingram, who has had about a dozen players in the program and on a few occasions — such as days when baseball games and track meets fell on the same day — went into games with just nine. There was a time he his left fielder was playing with the broken arm. “It makes you sweat a little bit. If the guys are willing to put the time in, they’re going to play.”

Moving players around the diamond is the norm.

“We’ve had bunch of different lineups in the last few years,” says Ingram. “That’s for sure.”

Baseball is a priority at West Washington as evidenced by the building a junior high diamond next to the high school facility — Claude C. Combs Field (named for the former Senators head coach and current school board member).

A training building with indoor mounds and batting cages will also benefit the Senators.

Whether that will translate into any home runs at Combs Field remains to be seen. While is is 300 feet down the lines and 350 to center, the field sits up on a hill and the wind seems to always be blowing in.

Ingram has never witnessed a game-time home run there.

Combs Field is lighted and has brick dugouts, raised fences all the way around and, recently, a turf home plate area was added.

“For a 1A, we have awesome facilities,” says Ingram.

The Senators are part of a sectional grouping with Crothersville, New Washington and Shawe Memorial. West Washington, a sectional host the past two years, has yet to win a sectional title.

As a member of the Patoka Lake Athletic Conference (with Crawford County, Mitchell, Orleans, Paoli, Perry Central and Springs Valley), the Senators play home and away games against each league team. 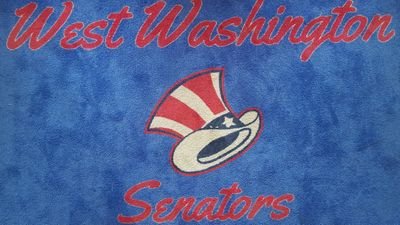 The Ingrams (from left): Brooke, Nick, Dustin, Larry, Luke, Janis and Brent. Brent Ingram is head baseball coach at West Washington High School in Campbellsburg, Ind. Larry Ingram, who was head coach at Eastern (Pekin) for 29 years, is one of his assistants. Brent and Dustin are the sons of Larry and Janis. Nick and Luke are the sons of Dustin and Brooke.