Matt Talarico has a zeal for teaching.

Sam Talarico Sr. was a defensive tackle at Indiana University and drafted by the Cleveland Browns in 1952. An injury caused him to come back to Fort Wayne.

“To help out a priest, he took a temporary teaching job,” says Matt Talarico. His grandfather went on to teach for decades at St. Jude Catholic School.

It was between the 2008 and 2009 seasons at NCAA Division III Heidelberg in Tiffin, Ohio, that Matt Talarico began to craft a teaching method for base stealing.

It started with two Heidelberg players — one who had speed but would not run like Talarico wanted.

“What I was doing before wasn’t really working,” says Talarico. “Simple cues like watch for this on the pitcher (were not hitting the mark with the player).

“Ultimately, it wasn’t giving him any confidence to go. He couldn’t see what I was seeing. So I had to think outside the box.

“That’s kind of how it all started.”

By the end of his second year at Heidelberg, Talarico was convinced he had something different than what everybody else was doing.

Talarico went to to use his system at the D-I level — first the University of Toledo (2010), University of Dayton (2011-15) and since the 2016 season Wright State University in Dayton, Ohio.

“I like all development and I love teaching,” says Talarico, who serves as hitting and infield coach and helps members of the RaiderGang with physical training and nutrition. “For me, it’s all teaching I have passion about.

“Basestealing has gone to the front not because I think it is more important than anything, it’s more teachable than anything,” says Talarico, who founded the StealBases.com website and has been a presenter on the subject at the American Baseball Coaches Association Convention, been featured on an ABCA podcast and addressed the Indiana High School Baseball Coaches Association State Clinic. “You wouldn’t guess that.

“It helps score runs and it helps teams that might not be on. We might not be due for 15 hits and eight runs, but it gives us an avenue (to offensive production).”

His website has many subscribers with teams also employing their brand of aggressive running.

“We use it as a way to create pressure, hit better and score more runs,” says Talarico. “If you look at our offensive numbers all-around, they are better than they’ve ever been. The threat of us running makes you throw fastballs and give us pitches to hit. It’s cool how it’s spread through baseball.

“I encourage guys to coach base stealing. We never coach it. It’s always something you recruit. The more you coach it, the better they get at it.”

While he has created a small business around his findings, he does not consider his methods proprietary.

“I don’t know that it’s something I can reserve for my own and say you can’t take it,” says Talarico. “If you can also teach it, you can do it.”

Talarico counts renowned coach and baserunning expert Mike Roberts among his mentors. Roberts coached at the University of North Carolina and is the father of former big leaguer Brian Roberts.

We want to be able to talk to them about things that can help them develop in ways they want to learn. We’re not trying to get them to go back to encyclopedias and the Dewey Decimal System and all that stuff we had to learn growing up.

“We want to communicate with them like social media — quick and out front. We’d like to think we have some success stories because we’re able to adapt.”

Talarico played for at Larry Windmiller, a member of the University of Saint Francis Athletic Hall of Fame and Northeast Indiana Baseball Association Hall of Fame, and his son Brett.

“Brett Windmiller was a big influence on me,” says Talarico of the man who is now on the coaching staff at Carroll High School in Fort Wayne. “I was impressed with how knowledge he was and how passionate he was. He was the the first guy I got close to on that level.”

More knowledge was gained playing at Manchester from Spartans head coach Rick Espeset. Talarico got his undergraduate degree in history.

Matt and Jasa Talarico have two daughters — Callie (18 months) and Lia (less than a one month). 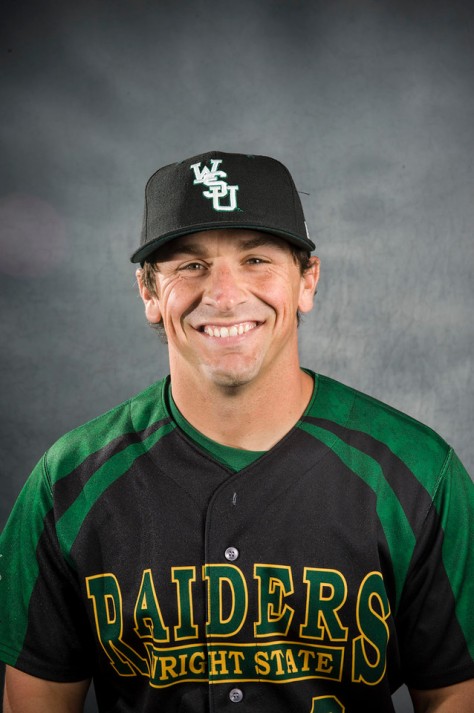