By exposing players to the latest training methods, the Indiana Chargers are getting them ready for the next level.

Doing indoor work at the Eastlake Chargers Baseball/Softball Academy inside Eastlake Athletic Club in Goshen, young athletes learn what it’s like at the collegiate level.

Founded by Joel Mishler, George Hofsommer and Ben Bailey in 2008 and now led by general manager Mishler, director of operations Justin Barber and strength and conditioning coach Evan Jurjevic, the Indiana Chargers has sent more than 135 players on to college baseball, several at the NCAA Division I level.

“It’s all about development,” Mishler said. “That’s why we exist.”

A former head coach at Glen Oaks Community College and Westview High School and a longtime professional scout, Mishler wants to give his players a clear picture of what it takes to the play college game through tools as well as physical and mental development.

With the experience of the staff, players are also helped through the college recruiting process, finding the best fit for them based on their needs and talents.

“There’s never any guarantees (of high school playing time or a college scholarship),” Mishler said. “It’s something you have to earn. But we will give them the information of what it takes.

“It’s a culture of getting better and working hard.”

During the off-season (November to March), high school players have been attending optional three-a-day workouts (three hours on Sunday afternoons and up to 2 1/2 hours on Tuesdays and Fridays).

Jurjevic, who excelled on the diamond at LaPorte High School and Carson-Newman University, takes the Chargers through the warm-ups and exercises that get them ready to play the game.

The use of bands and weighted Drive Line plyo balls is prevalent for building up muscles and recovery.

One way to build arm strength is through a program the Chargers adopted two years ago — a pulldown drill which has players take a running start a throw into a net with a radar gun clocking the velocity.

“We call it the ‘run-and-gun,’” Barber said. “It’s like a crow-hop on steroids. You won’t see anything like that during a game, but it allows more momentum and bigger effort level.”

After getting warmed up, players will do the “run-and-gun” once a week to see if they can top their personal best.

On Sunday, Jan. 29, the facility high school record of 99.2 was set by Plymouth High School junior and Valparaiso University verbal commit Jeremy Drudge. The previous mark was held by Marian High School senior/University of Dayton-bound Riley Tirotta. Three dozen have joined the 90/95/100-plus club since November 2014.

There were several BP stations, including one where Jurjevic bounced the ball to the plate. The idea was the stay back with the hands and be ready for a curve or off-speed pitch.

Mishler and his staff are continually consulting with high level college and professional baseball people to stay at the forefront of technology. Mishler has attended 23 of the past 25 American Baseball Coaches Association national conventions (it will be in Indianapolis in 2018) and goes annually to the Pitch-a-Palooza in Nashville.

“We’ve always been of the mindset that we have to get better as coaches,” Mishler said. “These kids are getting a lot of information that they are going to get at the college level.”

Barber was a star left-handed pitcher at Inter-City Baptist High School and Spring Arbor University — both in Michigan. He notes that the Chargers will field nine teams 11U through 18U in 2017 (tryouts were in August 2016). The younger teams will play from late April to early July with high schoolers taking the field in June and July with the possibility of fall ball in September and early October.

While the Chargers do take part in travel events, including those organized by Bullpen Tournaments and Pastime Tournaments — many at Grand Park in Westfield — it’s not always about the games.

“We’re more focused on the developmental side,” Barber said. “We started a league with like-minded travel organizations and play three-game series (on a weekend with a single game one day and a doubleheader on the other) with pregame infield and batting practice. You don’t get that in most travel tournaments.

Coaches 13U and above have college playing or many years of coaching experience.

“All of them are getting the same information and most recent and best available,” Mishler said.

It’s all about develop and getting better. 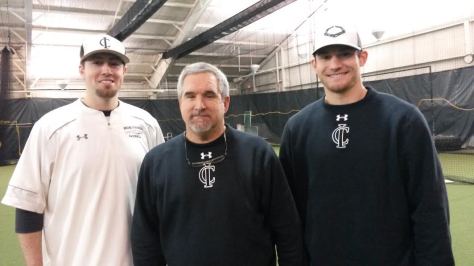 (from left): Justin Barber, Joel Mishler and Evan Jurjevic of the Indiana Chargers.