The Indiana Baseball Hall of Fame outgrew its facility once and it’s happening again.

Housed in the Alvin C. Ruxer Student Center on the Vincennes University-Jasper Campus, the Hall of Fame shines a light on Indiana’s diamond accomplishments and also salutes the contributions of Indiana High School Baseball Coaches Association Hall of Fame inductees and more.

Ray Howard, Hall of Famer and former head coach at Jasper High School who still helps the Wildcats as a batting practice pitcher and radio analyst on WITZ, is director of the Hall of Fame and curator of plaques and a collection of unique memorabilia.

The Hall of Fame has been in Jasper since 1977. After a few years at the Holiday Inn, it found a permanent home at VUJC in 1981.

An 1,111 square-foot expansion — named the Coach Bill Nixon Baseball Wing for the Hall of Famer’s generosity — took the Hall to the current 1,968 square feet of display space in 2007.

“I never thought we would have to build on again after that, but be we don’t have any place to put plaques any more,” says Howard.

With yearly inductions (the Hall of Fame adds a new class each January at the IHBSCA State Clinic in Indianapolis), a display of Louisville Slugger bats saluting IHSAA state champions and other gifts, the Hall is again being squeezed for space.

With Howard, Indianapolis North Central coach Phil McIntyre and Plainfield coach Jeff McKeon as organizers, a campaign to raise $40,000 — half from the Hall of Fame in Jasper and half from the IHSBCA membership — is in progress to expand again.

Framed original signatures from Negro Leagues players is a highlight at the Hall of Fame.

As is the history of old Major League Baseball ballparks.

Baseballs from the last game at Bush Stadium and the first game at Victory Field — both in Indianapolis in 1996 — have their place.

The University of Southern Indiana won NCAA Division II national championships in 2010 and 2014. The Screaming Eagles’ accomplishment is commemorated.

In 1977, South Bend Post 50 became the only Indiana team to win an American Legion Baseball national championship. The trophy for that triumph is on display.

Besides many uniforms, gloves and balls, there are several interactive displays, including IHSAA State Finals video clips and the popular “You Make The Call!,” where the visitor gets to be the umpire.

There’s the photos, rosters and ticket stubs from all the IHSBCA North/South All-Star Series going back to 1975.

Evansville’s Don Mattingly and Jasper’s Scott Rolen are saluted with items from their MLB careers taking corner infield spots in the museum.

Second base is occupied by Indiana Hall of Famers also inducted into the National Baseball Hall of Fame and Museum in Cooperstown, N.Y., with photos of the plaques of Mordecai “Three Finger” Brown, Max Carey, Oscar Charleston, Ford Frick, Billy Herman, Chuck Klein, Kenesaw Mountain Landis, Sam Rice, Edd Roush, Amos Rusie, Sam Thompson surrounding a replica of a Chicago Cubs jersey like the one Brown wore back in the early 1900’s.

Not far from that is a replica of a 48-ounce bat swung in games by Roush. For comparison, it hangs next to to a 32-ouncer from Lafayette’s Todd Dunwoody, a former big leaguer and regular at the annual Hall of Fame golf tournament in Jasper.

On the unique side, there’s a salute to the baseball-themed 2002 Chevy Impala owned by Greenwood’s Kyle Shaffer.

League Stadium in Huntingburg, where scenes from “A League Of Their Own” was filmed, is nine miles south of the museum where there is a collage of All-American Girls Professional Baseball League players.

An orginal lineup card from the 1940 MLB All-Star Game has a place of honor. New Albany’s Herman started at second base for the National League, 4-0 winners at St. Louis.

Caps from many Indiana high schools are suspended from the ceiling.

There’s a brick from old Comiskey Park in Chicago.

A display for the Indiana Baseball Hall of Fame in Jasper. The Hall of Fame has been located in the southern Indiana town for 40 years and housed at Vincennes University Jasper Campus since 1981. The facility will be expanded for the second time since 2007. 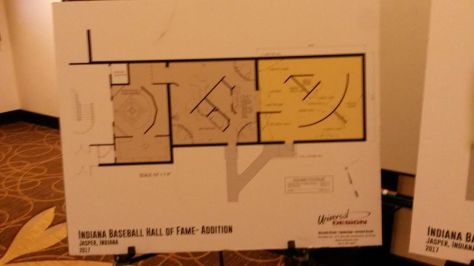