Devin DeYoung saw his future when he was a teenager and it was as a baseball coach.

“I knew from when I was 13 and hitting with John Mallee and Anthony Iapoce that’s what I wanted to do,” says DeYoung, 30. “(Mallee and Iapoce) had such an impact on me.

“I learned how to relate to people and to empower people just by interacting with them. They genuinely cared about every kid they worked with. I try to model how I approach the game after them.

Both men are major league hitting coaches — Malee with the Los Angeles Angels and Iapoce with the Chicago Cubs.

DeYoung will be a bench coach with the Double-A Birmingham Barons in the Chicago White Sox organization in 2020.

A 2008 graduate of Lake Central High Schoolin St. John, Ind., DeYoung played catcher for head coach Todd Iwema. He went on to play two seasons at the College of Lake County in Graylake, Ill., and one at Cumberland University in Lebanon, Tenn.

After that came a very brief stint as a player with the Rockland Boulders of the independent professional Can-Am League. He finished out the 2015 season with the Pomona, N.Y,-based team as a player-coach.

In 2016, DeYoung was a coach with the Wisconsin Rapids Rafters in the Northwoods League, a college collegiate circuit. He coached catchers, outfielders and hitters for a team that won both halves of a split season and the playoffs. More than a dozen players on that team went on to sign professional contracts.

“It’s best preparation for professional baseball there is,” says DeYoung. “We played 72 games in 75 games.”

There were no days off for the Wisconsin Rafters staff with the league’s all-star game, showcase and postseason. That meant a stretch of more than 80 days without time off.

In 2017 and 2018, DeYoung was bench coach/hitting coach with the Crestwood, Ill.-based Windy City Thunderbolts of the independent pro Frontier League. At the time, the league was predominantly a rookie league and has since consolidated with teams in the Can-Am League.

“It revives guy’s careers and helps them get back into or have their first shot at affiliated baseball,” says DeYoung of indy ball.

DeYoung has pro hitters coming from all over Chicagoland to hit with him at the Omni 41 and Morris Baseball facility in Schererville, Ind.

One of those hitters was Ryan Fitzgerald, who went to Fenwick High School in Oak Park, Ill., and played for the independent Gary SouthShore RailCats in 2017 and was signed by the Boston Red Sox and for the 2018 season.

DeYoung spent the 2019 campaign in the Red Sox system with the Greenville (S.C.) Drive.

As bench coach on a staff led by manager Iggy Suarez, DeYoung did many things. He coached first base and third base, instructed players on catching and base running and assisted Suarez, hitting coach Nelson Paulino and pitching coach Bob Kipper.

When Ryan Johansen became assistant hitting coordinator for the White Sox, he asked DeYoung to join the organization.

“It’s exciting to see the steps they’re talking and I’m just glad to be a part of it.”

He will be a bench coach for Barons manager Justin Jirschele, who will be 29 when the Southern League season opens.

“I will aid in the work load and try to make everybody’s job easier,” says DeYoung. “I’ll collect data and just try to be the voice of reason.

DeYoung is scheduled to report to spring training in Arizona Feb. 8. Before then, he will continue to teach lessons and clinics through Devin DeYoung Pro Baseball/Softball. But he’s carved out time to learn about players who may land in Birmingham in 2020 and for his family.

Devin and high school sweetheart Samantha DeYoung reside in St. John and have a daughter, Ella (7).

Much of what DeYoung knows about business came from working as a youngster at DeYoung Interiors of St. John, which was established in 1928.

DeYoung has cultivated a network of baseball people, including Justin Stone (Director of Hitting for the Cubs) and Travis Kerber at Elite Baseball Training in Chicago.

“Every time I’m around them I seem to grow,” says DeYoung. “The people I’ve had the privilege of being around helps with my obsession with trying to learn more about the game.

“I have a desperate pursuit of making baseball easier for other players than it was for me.”

He has started to do Electromyography (EMG) testing, which measures muscular activity through the swing.

“It helps you quantify things you can’t see within the swing,” says DeYoung. “You get a baseline and create a player plan. You can see deficiencies in the swing or a movement assessment. We can eliminate some guessing.

“We can find out what these players are capable of doing physiologically. We’re really early in the process.”

Devin DeYoung (11) talks with Dustin Pedroia during a Greenville Drive game. DeYoung, a graduate of Lake Central High School in St. John, Ind., was a coach in the Boston Red Sox organization in 2019. (Greenville Drive Photo)

Devin DeYoung (11) talks with Jonathan Ortega during a Greenville Drive game. DeYoung, a graduate of Lake Central High School in St. John, Ind., was a coach in the Boston Red Sox organization in 2019. (Greenville Drive Photo)

Devin DeYoung (11) coaches third base in 2019 for the Greenville (S.C.) Drive in the Boston Red Sox organization. The team’s home park has its own Green Monster. DeYoung is a graduate of Lake Central High School in St. John, Ind. (Greenville Drive Photo)

Devin DeYoung (left) sees relationships as the key to player development. He was with the Boston Red Sox organization in 2019. The graduate of Lake Central High School in St. John, Ind., is now with the Chicago White Sox system. (Greenville Drive Photo)

Devin DeYoung, a graduate of Lake Central High School in St. John, Ind., has known he wanted to be a baseball coach since 13. Here he is in 2019 with the Greenville Drive in the Boston Red Sox organization. (Greenville Drive Photo)

Devin DeYoung swings the fungo bat as a coach for the Greenville (S.C.) Drive in the Boston Red Sox organization in 2019. The graduate of Lake Central High School in St. John, Ind., is now in the Chicgao White Sox system. (Greeenville Drive Photo) 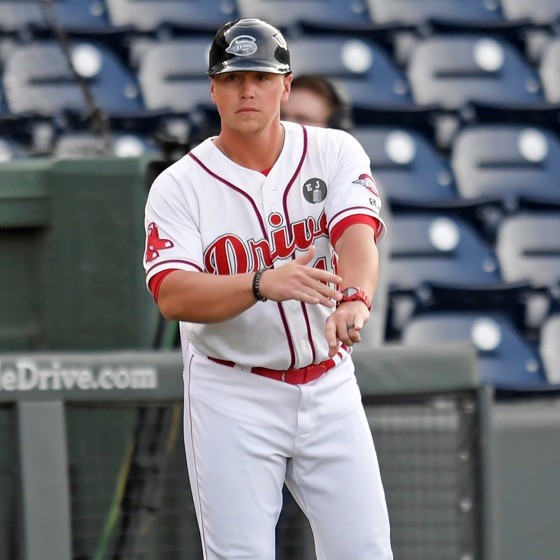 Devin DeYoung, a 2008 graduate of Lake Central High School in St. John, Ind., knew at 13 and taking hitting lessons from John Maleee and Anthony Iapoce that his future was as a baseball coach. He was with the Greenville Drive in the Boston Red Sox system in 2019 and will be with the Birmingham Barons in the Chicago White Sox organization in 2020. (Greenville Drive Photo)

Scott Kapers has a reason to show his choppers and it’s not just because his father is a dentist.

The oldest child of Dr. Scott A. Kapers, DDS, and Melissa Kapers, who both work at Creating Smiles PC in St. John, Ind. (across the Lake Central High School), Scott T. Kapers is enjoying his first taste of professional baseball with the Spokane (Wash.) Indians of the Short Season Class-A Northwest League.

Kapers, right-handed-hitting catcher and Schererville, Ind., native, was selected in the 17th round of the 2018 Major League Baseball First-Year Player Draft by the Texas Rangers after three seasons at Valparaiso University.

A middle infielder going into a high school, Kapers converted to catcher to get a chance at playing time on a Caravan team that featured a shortstop (Jerry Houston Jr.) two years ahead of him and a second baseman (Ako Thomas) in his class. Houston went on to the University of Oregon and Thomas to the University of Michigan.

He made a verbal commitment in the fall of his junior year and signed his letter of intent with the D-I Crusaders as a Mount Carmel senior.

The Redbirds were a team coached by Scott A. Kapers and other fathers.

John Mallee, who is now the hitting coach for the Philadelphia Phillies and formerly served in that role with the Florida Marlins, Houston Astros and Chicago Cubs, was a Shockers founder and talked to Kapers about attending Mount Carmel.

At VU, Kapers played head coach Brian Schmack and learned about “playing the game the right way” and following routines from him and assistant Ben Wolgamot.

As a catcher, he did much drill work with Nic Mishler. He credits Kory Winter with aiding in improving his physical and mental strength. Kapers played in 45 games as a freshman, 52 as a sophomore and 50 as a junior before being drafted. In 2018, he hit .263 with four home runs, nine doubles and 28 runs batted in.

He also played 92 summer collegiate baseball games for the Wisconsin Rapids Rafters of the Northwoods League in 2016 and 2017.

Through July 6, Kapers had played in seven pro games — two with the Arizona League Rangers and five with Spokane — and was hitting a combined .217 with no homers, two doubles and two RBIs.

Kapers’ approach in the batter’s box revolves around having competitive at-bats.

“It’s about being a smart hitter and not just a swinger,” says Kapers. “Quality at-bats are huge. You string quality at-bats to score runs and that’s how you win games.”

Following in his older brothers’ footsteps as a catcher at Mount Carmel and heading into his freshman year at Valpo U. is Jake Kapers (18). Sister Madison Kapers (20) will be a junior at VU. She played softball at Marian Catholic High School in Chicago Heights, Ill. 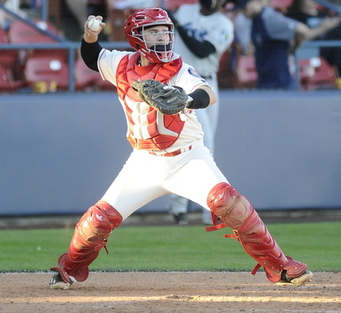 Scott Kapers grew up in Northwest Indiana and played baseball in Indiana and Illinois. The former Mount Carmel (Chicago) High School and Valparaiso University player is now in the Pacific Northwest with the Spokane (Wash.) Indians in the Texas Rangers organization. (Spokane Indians Photo) 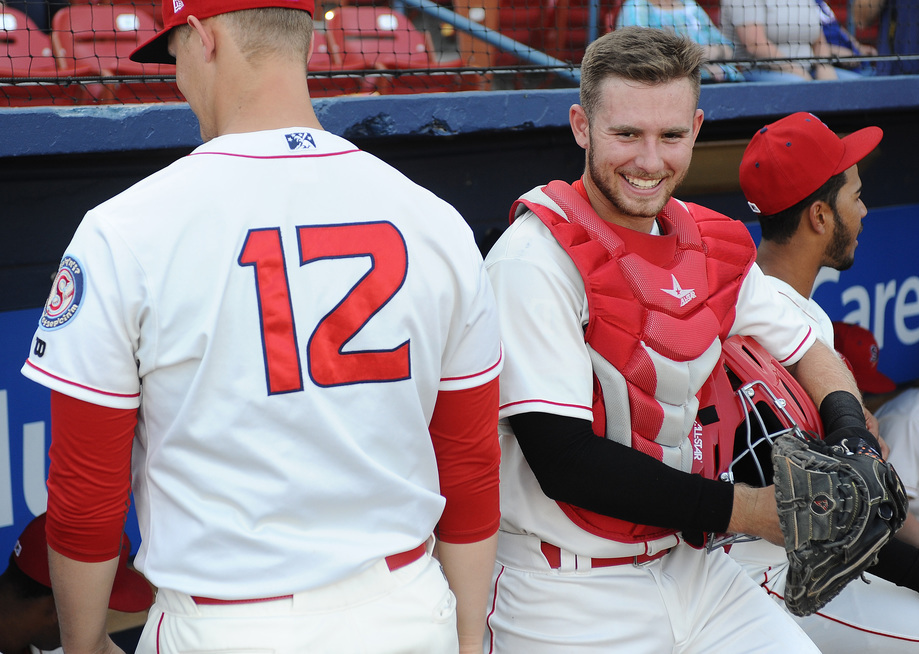 Scott T. Kapers, son of Dr. Scott A. Kapers, DDS, is all smiles as he gets set to take the baseball field for the Spokane (Wash.) Indians in the Texas Rangers organization. (Spokane Indians Photo)