Being a maker of tools, Rich Dunno looks at pitching a baseball with an engineering mind.
“I’m always looking for the bigger, better, faster things,” says Dunno, a Fort Wayne-based toolmaker and baseball coach who spoke about pitching mechanics Dec. 15 at the Huntington North Hot Stove as a guest of new Vikings head coach Mark Flueckiger. “Pitching mechanics is so broad and so variable. But there are absolutes — things that I see that every pitcher does in their own certain way.”
One of these absolutes is the ability to transfer energy during the kinetic sequence that is pitching a baseball.
“What we want to do is have the hips open before the upper body,” says Dunno. “That’s what they call separation and is a big part of keeping the arm healthy and maximizing velocity. That’s one of the transfers of energy.”
Dunno says the biggest transfer of energy comes at heel plant.
When done correctly, the energy results in more velocity coming out of the arm.
“If we fly open, we never get the effect of that extra torque that’s going to cause us to go harder because the lack of separation,” says Dunno. “Any time we open early, the early hip rotation will cause that arm to drag.
“It puts excessive stress on the inner part of your shoulder and the medial part of your elbow — your UCL area.”
Dunno recommends the book, “The Arm” by Jeff Passan for those who want to know about the history of arm injuries in baseball.
If pitchers transfer energy in an efficient way to create velocity and have pin-point control have a better chance of sustained success.
As a pitcher himself at Fort Wayne North Side High School and then in college, Dunno would let it fly.
“I never knew where it was going,” says Dunno. “There has to be a mixture of velocity and control.”
Dunno has traveled all over the country to talk with pitching experts such as Tom House and Ron Wolforth and has studied thousands of deliveries. He shares his knowledge with his pitching pupils.
Left-hander Andrew Saalfrank, who was Big Ten Conference Pitcher of the Year at Indiana University and was drafted by the Arizona Diamondbacks and D.J. Moore of Huntington U., who was being scouted by a several teams, are both Dunno students.
“My goal is to keep these guys as efficient as possible with the least amount of arm stress along with maximizing velocity,” says Dunno. “That’s what it’s all about.”
When working with young hurlers, the first thing Dunno does is videotapes them throwing out of the windup and the stretch.
“Whatever sticks out in my mind as a visual, that’s what we initially work on,” says Dunno. “Before anything else, I look at what the glove arm is doing.  “(The front arm) allows us to stayed closed on the front side and be a lot more consistent.”
Dunno refers to what the forearm and elbow is doing during the delivery as blocking and the forearm should be showing for as long as possible.
“To this day, I hear coaches say point your glove and throw,” says Dunno. “I don’t like the mitt being the boss. I want the elbow to be the boss.”
Dunno talks about having a strong elevated front side during the delivery.
What about the glove?
“My pitchers direct it right into the arm pit when they’re done that keeps the front side consistent,” says Dunno. “It’s right in the nest.”
Since the lead arm and the throwing arm are connected in the motion, if the path of the glove is inconsistent then so, too, will the release point be inconsistent.
“You hear it all the time: Consistency. Consistency. Consistency,” says Dunno. “Scouts are looking for repeatable mechanics. If you can’t repeat them, you’re never going to be consistent with any pitch.”
During Dunno’s research, he came to learn the importance of the drop-and-drive and how the lower half of the body can add speed to a pitch.
Dunno is the inventor of King Of The Hill, Queen Of The Hill and King Of The Swing ground force trainers and the devices are used by several professional and college teams. He’s invited to MLB camps to educate their coaches on how and the benefits of training with the King of the Hill.
The president of Ground Force Sports, Dunno gets to the go to Major League Baseball spring training each year to confer with some of baseball’s top minds.
“You want to ride the back side as long as you can,” says Dunno. “It all plays into late explosion.”
The device helps the user to keep from rotating their hips too early.
“You keep the back side flexed so you can drive through the front  leg,” says Dunno. “Force plate data is showing the high-velocity pitchers are getting more force off the back side than other pitchers and they land a lot harder.”
Now is the time of year that Dunno travels to various clinics. He was recently at the National Fastpitch Coaches Association Convention in Atlantic City and NFCA clinic in Chicago and will be at the American Baseball Coaches Association Convention Jan. 2-5, 2020 in Nashville.

For more info go to www.GroundForceSport.com.

Rich Dunno’s King Of The Hill ground force trainers are used throughout professional and college baseball. 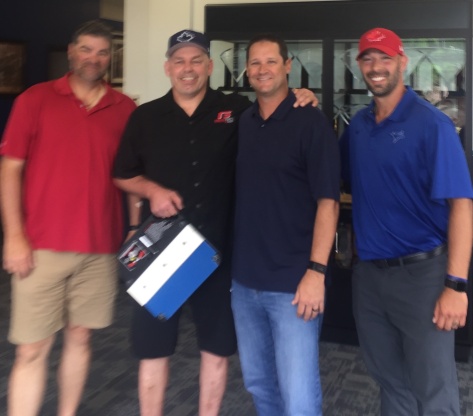 Rich Dunno has even introduced his King Of The Hill trainer in Canada.

The Washington Nationals use the King Of The Hill ground force trainer, invented by Fort Wayne’s Rich Dunno. 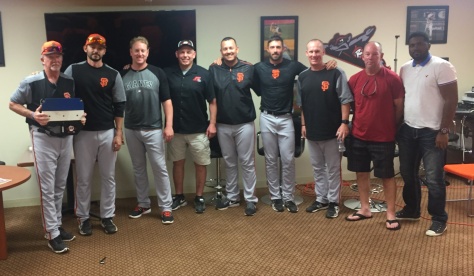 The San Francisco Giants also use the King Of The Hill ground force trainer, developed by Rich Dunno of Fort Wayne, Ind.

Rich Dunno talks about baseball pitching mechanics at the Huntington North Hot Stove clinic session on Dec. 2015, 2019. He is a toolmaker and coach who has intensely studied how to pitch for efficient and optimum velocity and control. (Steve Krah Photo)