Jeff Isom got to do something for the first time in nearly two decades as a professional baseball manager in 2018.

Isom got to hoist the championship trophy as the decision maker for the independent Frontier League’s Joliet (Ill.) Slammers — his first title as a pro skipper.

“It only took me 18 years, but I finally got one,” says Isom, a 1990 Lafayette Jefferson High School and 1998 Purdue University graduate who still resides in West Lafayette, Ind. “A lot of teams made the finals and just came up short for one reason or another. Our pitching staff (at Joliet) was outstanding and did not lose guys to major league clubs like some teams did.”

Without Major League Baseball feeding them players, Isom and other independent ball managers go out and found their own players. The Slammers championship squad featured 14 that came from tryout camps.

“I love getting guys that have been overlooked by the draft for one reason or another,” says Isom of his attraction to independent baseball. “Scouting is not an exact science. We work with them and try to continue to make them better players.

“In independent baseball, most teams rely on the manager. I like it that way. I have the ultimate say in who is going to be on our club.

“I value those tryouts. I know the players are hungry if they’re going to a tryout camp.”

The Frontier League is considered a developmental circuit and the maximum age is 27. A couple of top pitchers from 2018 — Nate Antone and Liam O’Sullivan — will age out and Isom intends to help them make connections so they can keep playing either at the independent or affiliated level.

“I’ve been fortunate to make a career out of this.”

Isom doesn’t see it as a job. He sees it as an opportunity to pass along what he knows about the game. He soaked up information from the folks in affiliated baseball and he has done the same thing in independent ball.

As a left-handed pitcher, Isom played for Tony Primavera at Lafayette Jeff then three seasons at Purdue (1991-93) — one for head coach Dave Alexander and two from Steve Green. Isom went 16-4 with five saves and a 3.72 earned run average over his last two Boiler seasons. In 149 1 /3 innings, he struck out 119 and walked 55.

Isom was born in Pullman, Wash., and wound up in West Lafayette when his father was hired at Purdue (Gary Isom is Professor Emeritus of Toxicology in the Department of Medicinal Chemistry and Molecular Pharmacology).

The southpaw was an all-Big Ten Conference honoree in 1993 along with teammate and future major league Jermaine Allensworth. The Boilermakers were the only college to recruit Isom.

“As a player, (Alexander) instilled discipline in me,” says Isom of the Indiana High School Baseball Coaches Association Hall of Famer. “He taught time management skills and how to hold yourself accountable.

“I wouldn’t be doing what I’m doing without Coach Green,” says Isom. “He’s probably the most influential person I’ve had in my baseball career.”

At age 14, Isom played for a Green-managed Pony League team.

“He taught me how to throw a split-finger fastball (forkball) and my career took off from there,” says Isom. “As a pitching coach/head coach, (Green) instilled a lot of confidence in me. He wanted me to have the baseball in my hand.

“I got drafted because of what he taught me.”

Drafted by the Pittsburgh Pirates in the 18th round of the 1993 Major League Baseball First-Year Player Draft, Isom pitched three seasons in the Pirates and San Diego Padres organizations and then four more in indy ball.

While playing in indy ball, he met two managers — Doug Simunic and Andy McCauley — that helped him on what would lead to a career as a manager.

Isom played for Simunic with the independent Northern League’s Fargo-Moorhead (N.D.) RedHawks and was allowed to pick the skipper’s brain.

“I was just trying to learn and he took me under his wing,” says Isom of Simunic, who went on to become the first independent baseball manager to reach 1,000 wins. “I took best from all the managers I had.

MacCauley coached in Fargo-Moorhead and met up with Isom again with the Frontier League’s Kalamazoo (Mich.) Kodiaks.

Isom was released eight times during his pro playing career. After three starts and three losses for Kalamazoo, he cut himself from the team and headed home only to be called back by MacCauley to be pitching coach. The two men have bounced baseball ideas off each other ever since.

MacCauley has been the manager of the Frontier League’s Evansville (Ind.) Otters since 2010.

When school is out, Will travels with the Slammers and sees the effort that goes into being a pro player.

“In independent baseball, you’ve got to put up numbers or there’s going to be changes,” says Isom. “Hard work will pay off.”

When he’s not away managing professionals, Isom can be found back in West Lafayette spending time with his family and teaching private lessons at On Deck Baseball, a business owned by former pro player Josh Loggins.

“I want to see kids get quality coaching,” says Isom, who coached two seasons at Lafayette Central Catholic High School in the 1990s. 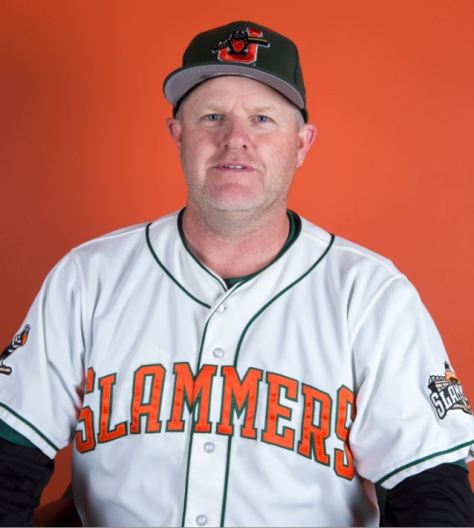