The University of Notre Dame sophomore does it with his baseball bat.

What are the origins of his power?

“It’s always been there, but I didn’t know how to access it,” says Kavadas. “All through high school, I would show some glimpses of power. But, for the most part, I was just gap-to-gap guy.”

After he produced plenty of run-producing gappers at Penn High School in Mishawaka, Ind., that trend continued into his freshman season at Notre Dame.

“All of a sudden I just found something in my swing,” says Kavadas, who hit .299 with five homers, five doubles and 20 RBIs in 2018. “The kinetic chain was in sequence and, all of a sudden, the ball started to fly.”

Add muscle and that helps even more.

“Our strength and conditioning programs here are incredible,” says Kavadas. “Coach Kyle (Jean) does an awesome job of getting us ready to play and take our game to the next level.”

In baseball, it’s not always about maxing out and bench pressing 300 pounds.

“We’re trying to stabilize our cores and promoting good, overall health so those fly balls to the warning track found their way over the fence,” says Kavadas.

At ND, Kavadas works on his hitting with both head coach Mik Aoki and assistant Adam Pavkovich.

When he’s going well, Kavadas is typically on his own. But when he struggles and needs to a tweak, he goes to the coaches and taps into their wealth of knowledge.

“Any time I really struggle I go to my dad,” says Niko of Jim Kavadas. “When I was in high school, I went to an instructor up in Sturgis (Mich.) named Mike Marks and he really helped me. My dad went to every single lesson (at Hitters Edge) with me and absorbed all that information. Any time I struggle, he can see something Mike would have said. It’s just like having Mike there.”

On defense, Kavadas has been primarily a third baseman this season. Last summer with the Kalamazoo (Mich.) Growlers of the Northwoods League, he played at first base.

“I’m really comfortable over there as well,” says Kavadas, who has committed to play this summer at first base for the Harwich Mariners of the elite Cap Cod Baseball League.

Kavadas saw that the summer collegiate routine is different from the spring season where he typically plays four games a week (mid-week game and three-game weekend series) with practices plus at least three workouts and, of course, classes and study time (he is enrolled in ND’s Mendoza School of Business).

There are many built-in obligations during the school season and players are on their own during the summer collegiate season.

“It’s a lot of baseball,” says Kavadas of the summer. “We play 70-something games in 70-something days. “You have to be able to manage your time, take care of your body and prepare for each game.

“That was a new experience for me, but I think I came out a lot better.”

“Me and my brother (C.J.) both have had an incredible experience playing at Penn,” says Kavadas. “We’ve had so much fun with our best friends.”

The Kingsmen won an IHSAA Class 4A state championship in Niko’s sophomore year (2015), lost to the semistate his junior year (2016) and finished as state runners-up his senior year (2017).

Kavadas was a an all-state honoree as a junior. He played for Lids Team Indiana during the summers and the San Francisco Giants scout team in the fall.

He started playing organized baseball at Harris Baseball/Softball in Granger, Ind., until 7. Then some fathers, including his own, started a travel team called the Granger Cubs that played 60 games a summer. One of his teammates was Matt Kominkiewicz.

Jim and Robin Kavadas have four children — Abigail, Niko, C.J. and Tess. C.J. Kavadas is a junior on the Penn High School team.

Niko Kavadas (12) is a sophomore on the Notre Dame baseball team. He is a power-hitting corner infielder. (Notre Dame Photo) 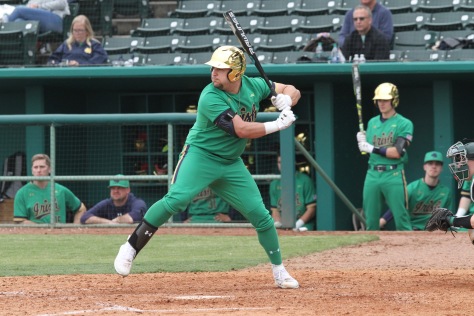 Niko Kavadas eyes a pitch as a power hitter for the University of the Notre Dame baseball team. The sophomore is a graduate of nearby Penn High School in Mishawaka, Ind. (Notre Dame Photo)

Niko Kavadas gets set at third base during a 2019 baseball game for the University of Notre Dame. He has mostly at the hot corner for the Fighting Irish. He anticipates he will be at first base this summer with the Harwich Mariners of the Cape Cod Baseball League. (Notre Dame Photo) 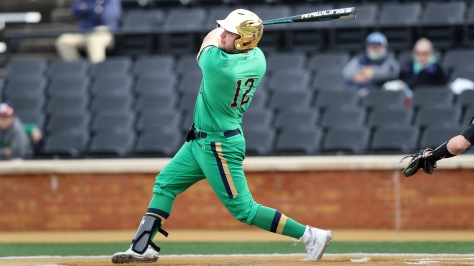 When Niko Kavadas found something in his swing midway through his freshmen season at the University of Notre Dame, his power increased. The sophomore currently has 10 home runs, 11 doubles and 35 runs batted in for the 2019 Fighting Irish. (Notre Dame Photo)