“We’ve been plugging guys in and out trying to find the right comfort level,” says Oppy. “They’ve handled some change well.”

By beating Brebeuf Jesuit 6-3 Monday, May 28 for the IHSAA Class 3A Danville Sectional title — the seventh in program history —  Tri-West earned the right to play Saturday, June 2 at the Crawfordsville Regional.

North Montgomery plays West Vigo in the morning game followed by Indian Creek against Tri-West. Because Indian Creek’s graduation is Saturday morning, the first game is set for 11 a.m., followed the second around 2:30 p.m. The championship is slated for 7.

Tri-West, based in Lizton, Ind., will be aiming at its first regional crown.

The power-hitting Bruins were averaging more than 10 runs per game heading into the postseason.

“We get on base and score a lot,” says Oppy.

Tri-West is currently among the top home run producers in Indiana with 24 (11 belonging to catcher Derek Wagner). According to MaxPreps, only Center Grove (34), Monrovia (34) and Pike (27) have more.

“We’ve had a lot of experience the last couple years has helped our program,” says Oppy.

Junior Blake Bear sees most of the time in right field. Sophomore Quinten Cooper also plays in the outfield.

Teams play home-and-home series on Tuesdays and Thursdays. Tri-West and Frankfort both went 10-4 to tie for the Sagamore championship.

The 20-6 Bruins split with Crawfordsville, Danville, Frankfort and North Montgomery and suffered non-conference losses to Avon and Cascade.

There were 33 players in the program this spring for varsity and junior varsity teams.

Oppy graduated in 2004 from Danville Community High School, where he played for and gained knowledge from veteran Warriors head coach Rick Foster that helps him to this day.

“It was the way he communicated with his players and how he handled different aspects of running a baseball program,” says Oppy of Foster. “As for the on the field stuff, he knew a lot. I would ask the question of why we would do this instead of that.

“I also saw the way he treated people.”

While Bunton was very personable, he was also very demanding of his athletes.

“He would push people,” says Oppy. “He expected more out of you than you would out of yourself.

“You hold yourself and other people accountable.”

Bunton was also a stickler for time management.

Ryan and Nicole Oppy have two daughters — Lydia (4) and Margaret (1). 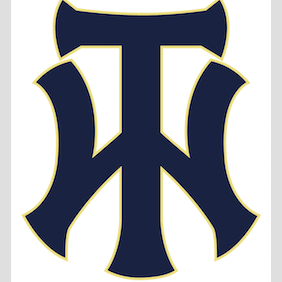 Tri-West Hendricks made it two IHSAA Class 3A sectional baseball titles in a row in 2018 under Bruins head coach Ryan Oppy. Tri-West plays in the Crawfordsville Regional Saturday, June 2.

The Tri-West Bruins hoist the trophy at the 2018 IHSAA Class 3A Danville Sectional baseball tournament.