Canterbury was founded as an independent, coeducational day school in 1977. A college preparatory education is offered to students in early childhood through Grade 12. Of nearly 1,000 students, around 300 of them are the high school.

According to McMahon, yearly tuition is around $22,000.

The 2018 season marks McMahon’s 28th in charge of the Cavaliers on the diamond.

Why does he still do it?

“It’s the influence on the players.”

His guidance has been appreciated.

McMahon is one of 50 national recipients of the Positive Coaching Alliance’s coveted National Double-Goal Coach Award presented by TeamSnap, named for coaches who strive to win while also pursuing the more important goal of teaching life lessons through sports.

Besides website and newsletter mentions, the award carries a $200 prize, a certificate and two tickets to PCA’s National Youth Sports Awards Dinner and Benefit to be held April 28 at Stanford University in California.

In teaching a “game of failure” and dealing with many situations like interacting with parents, McMahon turned to the PCA for resources.

“I’ve been attending classes and seminars for 14 years with PCA,” says McMahon. “I get a lot out of it.”

In turn, so do his athletes.

Of the 25 letters of recommendation for the award, 19 came from former players.

“That means a lot to me,” says McMahon, who sees all of his student-athletes go on to college. Eighteen of them have played college baseball.

Switch-hitting corner infielder Simon Klink played at Purdue University and then made it to Double-A with the San Francisco Giants organization.

Right-handed pitcher Chris Squires was a relief pitcher at Indiana University and advanced to Double-A with the Florida Marlins system and also played independent pro baseball.

Both of Pat and Kim McMahon’s outfield-roaming sons played baseball in college — Paddy McMahon with he club team at Tulane University in New Orleans and Danny McMahon at  Swathmore College near Philadelphia.

During exam week, no games can be scheduled and practices are voluntary.

“I call it ‘money week,’ says McMahon. “That’s when they get really good grades to get good college offers.”

Two baseball players scored a perfect 36 on the SAT.

“My kids can miss any practices for academics at any point,” says McMahon. “It’s STUDENT-athlete and we’ve lost track of that (at many places).

“We just don’t let them get complacent.”

Top juniors on the current Cavaliers squad are Ben Axel and Liam Ward.

Canterbury has a no-cut policy. Everyone who goes out for the team makes it.

“I’ve found they bring out the best in each other. That really helps my kids at the next level.”

“I’m very big on culture,” says McMahon. “I have to see how the mold together.”

Canterbury players have parents who are accomplished business professionals.

“These kids have to be successful,” says McMahon, who helps operate McMahon’s Best One Tire & Auto Care.

The company, established by his father Pat in 1969 after moving from Detroit, has 104 employees. While Pat is called Coach around the field. Around the shop, he is known as Bubba.

“She’s the whole reason this has worked,” says Pat. “She helps with parents. She knows the history of the program.”

The Cavaliers do not belong to a conference and play in an IHSAA Class 2A group with Adams Central, Bluffton, Churubusco, Eastside and South Adams.

Canterbury hosted the 2017 sectional, The Cavs hoisted sectional trophies in 2009 and 2014 and took regional hardware in 2009.

A 1982 Dwenger graduate, McMahon played at Valparaiso University and learned from Emory Bauer and was a teammate of future big league player and manager Lloyd McClendon. Both are Crusader and Indiana High School Baseball Coaches Association Hall of Famers.

“Em Bauer taught me so much about life,” says McMahon. “He was a neat guy.”

McMahon graduated Valpo U. in 1986 and came back to the Summit City. He was a pitcher for Mexican Joe’s in Fort Wayne’s Stan Musial League when he was approached about the possibility of coaching at Canterbury. He accepted.

The first few seasons, the Cavs played all their games on the road. Canterbury funded new dugouts and bleachers at the University Saint Francis for the right to play games there.

With the help of baseball ambassador and IHSBCA Hall of Famer Bill Jones and financial backing of former New York Yankees minor leaguer Pete Eshelman (who is owner Joseph Decuis restaurant and other properties in Roanoke and Columbia City), Canterbury got its own field with dimensions mimicking Yankee Stadium.

IHSBCA coaches in Canterbury’s district — many of who are educators — continue to make McMahon their representative.

“That means a lot to me that my peers say I can be that person,” says McMahon. “I really admire teachers.”

Pat McMahon is in his 28th season as head baseball coach at Canterbury School in Fort Wayne in 2018. He is also one of 50 national recipients of the Positive Coaching Alliance’s coveted National Double-Goal Coach Award presented by TeamSnap, named for coaches who strive to win while also pursuing the more important goal of teaching life lessons through sports. (PCA Photo) 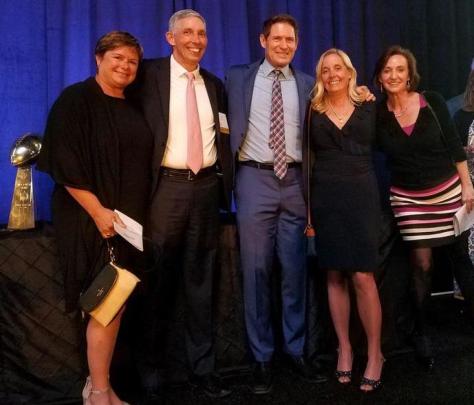