Power may not show up at the field every day.

But there’s no reason aggressiveness on the base paths can’t be a part of each game.

“We did a very good job last year of taking the extra base,” says Bridges, who played four seasons at Griffith (Ind.) High School and five at Purdue University. “We’d see the ball in the dirt and were gone. It’s something I expect out of each one of my kids — to be a good, aggressive base runners.

“We always try to put pressure on the defense and make them make a play. High school kids are prone to make mistakes — even the best of them. A little bit of pressure can go a long way.

“You’re not always going to have those boppers. You can teach these kids to run bases and keep going. I can keep playing that style.”

To get his team ready for the postseason, Bridges has beefed up the non-conference schedule. It includes contests against IHSAA members Crown Point, Hammond Morton, Highland, Hobart, Kankakee Valley, Lowell, Munster, Portage and Valparaiso and Illiana Christian, an Illinois High School Association school in Dyer, Ind.

A game in the annual High School Baseball Challenge hosted by the Gary SouthShore RailCats at U.S. Steel Yard in Gary is scheduled against Lowell on Friday, April 12.

Hanover Central (enrollment around 715) is part of an IHSAA Class 3A sectional grouping with Andrean, Kankakee Valley, Knox, Twin Lakes and Wheeler. The Wildcats have won one sectional crown — 2011. That team went on to be 2A state runners-up.

Bridges played for head coach Brian Jennings at Griffith and graduated in 2007.

A corner infielder and designated hitter for Purdue, Bridges appeared in 126 games (85 as a starter) and hit .288 with six home runs and 61 runs batted in. A back injury in his freshmen season led to a medical redshirt.

“I enjoyed every second of all five years of it,” says Bridges of his Purdue days.

He credits Schreiber for his attention to detail whether it was a bunt play, study tables or the amount of commitment it took to achieve excellence.

“He likes things done a certain way,” says Bridges. “If kids understand the level of commitment needed at the next level, it will help them for the four years of high school.”

Bridges graduated from Purdue and has a special education endorsement and masters degree from Indiana Wesleyan University. He taught in the Griffith system and was an assistant on Jennings’ baseball staff for four seasons before going to Hanover Central, where he teaches physical education at the middle school in addition to going baseball.

While he may not have been that way when he was playing for him, Bridges says he saw Jennings come to the see the value of giving his players a physical and mental break when it’s needed.

“We get the whole week off before tryouts,” says Bridges of his Wildcats program. “Once it starts, there’s no break.

During this IHSAA limited contact period where coaches can lead their teams in baseball activities for two hours two times a week, Bridges has players coming in at 5:30 a.m.

“We have quite a few basketball kids,” says Bridges. “Coach (Bryon) Clouse is nice enough to let my pitchers throw.”

“I the way they have it set up now,” says Bridges. “Coaches are aren’t running these kids four days a week in January and February.

“But I wish they would let pitchers throw a little more. Arm care is important and some of these kids have nowhere to throw — not only pitchers, but position players.”

Hanover Central pitchers began bullpens this week. Bridges will slowly progress their pitch counts moving up to the first official day of practice (March 11) and beyond.

Noting that the community is growing and that there are a number of baseball players in the eighth grade, Bridges says there is the possibility of having a C-team in the future.

Hanover Central Middle School fields a team for Grades 6-8 in the fall.

In the summer, there is Cedar Lake Youth Baseball and Saint John Youth Baseball. Both offer teams for Cal Ripken/Babe Ruth players. There are also a number of area travel ball organizations.

Bridges has known John Mallee for two decades. He went to him for hitting lessons as a kid. He is now a hitting advisor for Mallee and this summer will coach the Northwest Indiana Shockers 16U team. Indoor workouts are held at All Aspects Baseball and Softball Academy in South Chicago Heights, Ill., and The Sparta Dome in Crown Point, Ind. Mallee is the hitting coach for the Philadelphia Phillies.

Catcher Jesse Wilkening, a 2015 Hanover Central graduate, made his professional debut in the Phillies system in 2018.

Hanover Central plays it home games on-campus. Since Bridges has been with the Wildcats, they have added a batting cage behind the home dugout and got a portable “Big Bubba” portable batting cage and pitching machine.

“We always looking to improve the field,” says Bridges. “But I want to help the kids first with their skills.”

Ryan and Nicole Bridges have a daughter. Harper turns 2 in March. 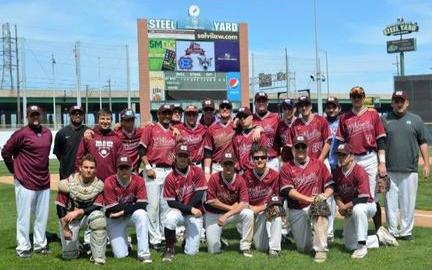 The baseball team from Hanover Central High School in Cedar Lake, Ind., gathers at U.S. Steel Yard in Gary. The Wildcats, coached by Ryan Bridges, are to play at the home of the Gary SouthShore RailCats again April 12, 2019.