This is not your typical story of college baseball recruitment and commitment.

Nic Besecker, a senior at New Castle (Ind.) High School, played travel baseball just a few times — his 12U summer with a team called the Revolution and as a fill-in at 16 with 17U Baseball Academics Midwest (BAM).

A self-described “rec league” player most of his diamond life, Besecker has in the New Castle Babe Ruth League and toed the rubber of the all-star team in last summer’s Indiana state tournament in Crown Point. That team was coached by Bret Mann, who had also coached New Castle’s entry in the 2012 Little League World Series.

Besecker, a right-handed pitcher, had his velocity clocked just three times during his prep days. He maxed out at 78 mph at an Earlham College camp as a freshman.

He got into the weight room and took a few lessons from pitching coach Jay Lehr and his velo went up.

“He’s been a big part of it,” says Besecker of Lehr, who is based in central Indiana. “We haven’t gotten to him enough. I’ve had only five true lessons with him, but he taught me something every time. He me how to use my lower half and get into my legs.”

Following his junior year at New Castle, he attended a Prep Baseball Report showcase and went as high as 85. In the early part of 2020, he was at another PBR event and got up to 89.

He gets the most out of what he got. That’s why Besecker has been enamored with major league pitcher Tim Lincecum and what he did with his small frame.

“He’s been my idol since I’ve been little,” says Besecker. “What made me fall in love with him is that when he was good, he was the best pitcher in the world. He was so different from everyone else.”

Besecker has prided himself in exceeding expectations.

“Who’s this little squirt?” says Besecker imitating batters facing him for the first time. Then comes the first delivery.

But it’s not just about the heat.

“I’ve always prided myself in being a pitcher,” says Besecker. “I always knew how to locate.

Besecker’s passion impresses first-year New Castle head coach Brad Pearson, who didn’t get to see the pitcher perform in a senior season that was canceled because of the COVID-19 pandemic.

“Nic is one of those kids who seems to be all about baseball,” says Pearson. “He wants to learn. He wants to get better. He just loves the sport.”

“He’s not worried about lightning up the radar gun,” says Pearson. “He just wants to get outs.

Besecker signed his National Letter of Intent with NCAA Division I Virginia Military Institute on May 11.

Funny thing is when Keydets head coach Jonathan Hadra and pitching coach Sam Roberts welcome their new recruit to the Lexington, Va., campus it will represent a few firsts.

Because of COVID-19 restrictions, it will be the first time for Besecker and his coaches will seeing each other in-person when the player makes his first appearance in Virginia.

“I had options,” says ays Besecker, who will step into a program that has sent right-handers Zak Kent, Josh Winder and Matt Eagle into pro baseball in recent seasons. “Coach Hadra and Coach Roberts has something special going on over there.”

Besecker says he does not owe four years of military service after he graduates from VMI.

“I’m going there to play baseball and etch out some kind of career in baseball,” says Besecker. “That’s been my dream.”

Like all first-year VMI students, Besecker will start on the “Rat Line.” He is hopefully that this basic training program that usually lasts from August through January will help him pack on 20 to 30 pounds.

“I would not get that anywhere else,” says Besecker. “I’ve always been a guy to accept that kind of challenge.”

The majority of new cadets begin around Aug. 15, but they have had summer conditioning programs in the past. If those are available and his coaches want him to attend, Besecker might leave for VMI early.

It’s not yet certain when or if New Castle will have a graduation ceremony.

VMI is a member of the Southern Conference. The Keydets went to Virginia and North Carolina before the 2020 season was halted and was to play home-and-home series with Virginia Tech.

The SoCon tournament was to be staged at Fluor Field in Greenville, S.C. The park has its own “Green Monster.” The Greenville Drive are Low Class-A affiliates of the Boston Red Sox.

Besecker played junior varsity baseball as a New Castle freshman and enjoyed his best varsity campaign as a Trojans sophomore.

“I played against guys who were able to hit the ball regardless of velocity,” says Besecker. “You have to be creative (with breaking pitches).”

The oldest of Kevin and Lauren Besecker’s two sons, Nic was born in Centerville, Ohio and was raised in Greenville, Ohio.

“I’ve been in a small town my whole life,” says Besecker.

When he was 9, his father brought the family to New Castle. That’s where he was a mechanic/crew chief for the racing Armstrong family, including Dakoda and Caleb, and Nic could get into the Focus program for gifted kids.

“It was a no-brainer for us,” says Nic of the move. “It was a perfect storm.”

He went to be inducted into the National Honor Society and participate in speech and debate while posting a 3.6 grade-point average (on a 4.0) scale at New Castle High.

Nic has logged around 200 service hours at New Castle Babe Ruth’s Denny Bolden Field and has been an assistant coach for teams featuring his little brother Drake (the 13-year-old left-hander is already as tall as big brother and finishing seventh grade).

Lauren Besecker holds a sports marketing degree from Miami University in Oxford, Ohio, and has what Nic calls a “love/hate relationship” with the Cincinnati Reds. She is waiting management to make the moves to again make the team make a consistent contender.

Before focusing on baseball his senior year, Besecker played football from fourth grade through junior year. The former quarterback was encouraged by Jaymen Nicholson, who coached in fifth and sixth grade and was part of the highs school staff.

“He’s always believed in me,” says Besecker. “Guys like him and Bret Mann have told me, ‘If you want to do it, you can do it.’ They bought in

“That’s catapulted me as far as I’ve gotten so far.” 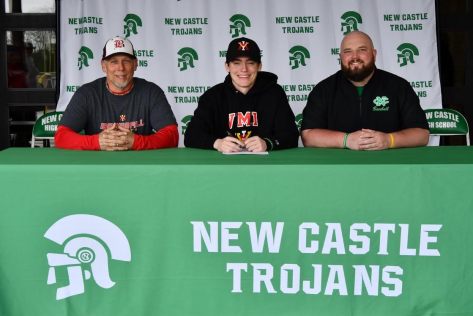 Perhaps, it’s fitting that the last letter in this standout baseball pitcher’s shortened name is a K.

Zack Thompson, a 6-foot-3, 215-pound junior left-hander at the University of Kentucky, sure has made short work of opposing hitters by putting up strikeout after strikeout.

Thompson, who employs a four-seam fastball that he can sometimes get up to 97 mph that he mixes with a cutter, change-up, curveball and slider, says he goes to the mound with two keys in his mind: Get a first-pitch strike and after that win the 1-1 battle.

Thompson is on a team with Nick Mingione as head coach and Jim Belanger as pitching coach.

Why did Thompson choose Kentucky?

“It was just the right fit and has a very blue collar feel,” says Thompson. “My family (which includes father Bill, mother Jan and older brother Nick) can see games. They’re usually down here every weekend. And it’s in the (Southeastern Conference).

“The SEC has the best competition and best environment to improve.”

Thompson describes the atmosphere at conference road games as “incredible.”

He has gotten to stand on the bump on a circuit that includes Alabama, Arkansas, Auburn, Florida, Georgia, LSU, Missouri, Mississippi, Mississippi State, South Carolina, Tennessee, Vanderbilt and Texas A&M.

In the summer of 2018, Thompson played for the USA Baseball Collegiate National Team, making three appearances with one start. He was 1.0 with a 0.00 ERA, eight strikeout, five walks and three hits allowed in 8 2/3 innings. Opponents, including Chinese Taipei, Japan and Cuba, hit .107 against the left-hander.

“I got to see how other people do it.”

“Coach O is great,” says Thompson of O’Connor. “We worked on things in bullpen that translated to the game really well like his philosophies and pitch calling.”

Mainieri is a former head coach at Notre Dame, where O’Connor was his pitching coach.

Baseball America made the 21-year-old Thompson the No. 1 SEC prospect in the 2019 Major League Baseball First-Year Player Draft (which is slated for June 3-5). D1 Baseball has him No. 2 on their list. He is also high in prospect rankings for MLBPipeline.com and Perfect Game.

“I try not to worry about it,” says Thompson of the MLB Draft. “It won’t matter if I don’t do my job on the mound.”

Thompson was born in Anderson, Ind., and grew up in Selma near Muncie. Playing for Indiana High School Baseball Coaches Association Hall of Famer Brian Dudley at Wapahani.

“Brian was awesome and a great mentor,” says Thompson of Dudley. “He’s a great leader in the community.

“He sets his players up for success in the class room and on the field.”

Thompson was a National Honor Society student that led him to study business management in college. On the diamond, he put up eye-popping numbers.

Thompson was selected in the 11th round of the 2016 MLB Draft by the Tampa Bay Rays, but opted not to sign and went to Kentucky. 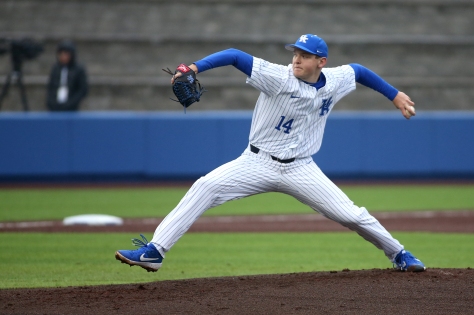 Zack Thompson is among the nation’s top pitching prospects for the 2019 Major League Baseball First-Year Player Draft. The left-hander is a graduate of Wapahani High School in Selma, Ind., and has been racking up strikeouts in droves as a University of Kentucky junior. (University of Kentucky)