Justin Huff has a new role in his second year on the Purdue Fort Wayne baseball coaching staff.
His family came to Fort Wayne when wife Jenna Huff — who hails from Tecumseh, Mich. — was hired as news director at WANE-TV (Ch. 15) and he reached out to Mastodons coach Doug Schreiber.
A director of player development position was created for Huff for 2020-21 with the idea that something else might open up in the future. In that job, he was restricted from actual coaching so he kept charts, gave analytics insights and helped in the dugout during games.
In 2021-22, Huff is in the volunteer coach post with all its responsibilities.
“Coach Schreiber has empowered me to do a lot of the practice scheduling,” says Huff. “I would make sure transitions were efficient.”
On a staff that also features Brent McNeil and Ken Jones, Huff also helps with hitters and infielders, leads outfielders and is expected to coach first base when PFW — a member of the NCAA Division I Horizon League — opens its 2022 season Feb. 18 at Georgia State.
“The challenge is we’re not on the field,” says Huff, noting that the Mastodons last practiced outdoors in November.
At the beginning of the fall, the team took advantage of warmer temperatures and put in 20 hours per week of team practice.
“(Hitters) got 50 to 60 (at-bats) and (pitchers) 20 to 22 innings,” says Huff. “You got to figure out exactly what you have. This year we’ve got 19 new guys so we saw how they fit with the returnees.
“There were intrasquad games in the weekends and got the players accustomed to our system and our routines.”
Then came a four hours-a-week phase where coaches could break down player’s mechanics and make adjustments if necessary.
“It’s not like going 0-of-4 in scrimmage,” says Huff. “There’s no failure.
“They’re getting their bodies ready to go and getting their timing down.”
Hitters were going to face live pitching for the first time Thursday (Jan. 20) with 20 hours-a-week workouts starting back up Jan. 28.
Huff came to Indiana from Gordon State College in Barnesville, Ga., where he was interim head coach during the 2020 COVID-19 pandemic-shortened season. With just one assistant, he was charged with all positions except infielders.
A shortstop as a player, Huff is a 2003 graduate of Westover High School in Albany, Ga.
Huff also played five years of American Legion ball for Albany Post 30 and manager Larry Cook. Albany went to the Legion World Series in 2001 — the year Brooklawn (N.J.) Post 72 beat Lewiston (Idaho) Post 13 for the title in Yakima, Wash.
“He was a very strategic guy and super-competitive,” says Huff of Cook. “He never stopped coaching me. He challenged me and made me better.”
Huff made collegiate stops of two years at Darton College in Albany (now merged with Albany State University) and one each at Coastal Carolina University in Conway, S.C., and Valdosta (Ga.) State University. His head coaches were Glenn Eames (with assistant Jamie Corr) at Darton, American Baseball Coaches Association Hall of Famer Gary Gilmore (with assistant Kevin Schnall) at Coastal Carolina and National College Baseball Hall of Famer Tommy Thomas at Valdosta State.
Huff credits Eames for showing him how to care for fields and Corr for his organization, practice plan and how to run a program.
At Darton, Huff played against Young Harris (Ga.) College featuring his cousin Charlie Blackmon. After playing for the Mountain Lions in 2005 and 2006, lefty-swinging outfielder Blackmon was selected in the 2008 Major League Baseball First-Year Player Draft out of Georgia Tech and made his MLB debut for the Colorado Rockies in 2011.
Gilmore led the Coastal Carolina Chanticleers to the 2016 College World Series title.
“(Gilmore and Schnall) are two of the best coaches in the country,” says Huff. “I sat and watched how they were planning out the game and their style of offense that really helped me down the road.”
An offensive-minded coach, Huff prefers aggressiveness and small ball tactics.
When Huff was on the team at Coastal Carolina, he was a teammate of Andy DeLaGarza, a product of Norwell High School in Ossian, Ind. His father — Mark DeLaGarza — runs the Summit City Sluggers travel organization in Fort Wayne.
From Thomas, Huff says he learned how to care about players and build relationships.
Former big leaguer Phil Plantier was Huff’s manager with the independent South Coast League’s Macon (Ga.) Music in 2007 and witnessed the differences between the pro and college style.
“I worked with him on hitting stuff,” says Huff. “I wanted to pick his brain as much as I could.”
When he was done as a player, Huff went into the banking industry while completing his undergraduate and Masters of Business Administration degrees.
He helped coach at Deerfield-Windsor Academy in Albany and with Leesburg American Legion Post 182 before spending five years at Darton with head coach Scot Hemmings. The Cavaliers won their first Georgia Collegiate Athletic Association title in 2015.
“He had ways to motivate players and was very organized,” says Huff of Hemmings. “The development of players was incredible there.”
When Jenna took a job at station in Macon, Justin helped coach the varsity and was middle school head coach at Tattnall Square Academy. The Trojans won the 2016 Georgia High School Athletic Association Class A state championship.
Travis McClanahan was head coach when Huff joined the staff at Gordon State. The Highlanders went 50-9 and lost to Walters State in the National Junior College Athletic Association East-Central District in 2019.
Justin and Jenna Huff have been married for 10 years and have four daughters — Devon (8), Canon (6), Fallon (4) and Lennon (2).

Going from a squad full of veterans and experiencing NCAA Division I baseball success in 2016, the Mastodons of Fort Wayne had much less college experience and suffered growing pains in 2017.

With a new focus, Fort Wayne is looking to get things turned around in 2018 under the guidance of 10th-year head coach Bobby Pierce.

“We wore it last year,” says Pierce, who saw the Mastodons go 9-43 after losing 14 impact players — senior shortstop Greg Kaiser, senior outfielder Brandon Soat and and drafted sophomore pitcher Evan Miller among them — from a 33-26 campaign in ’16 that included a second straight trip to the Summit League tournament finals. “(Junior college) guys made the (2016) team as good as it could be. Freshmen (in 2017) need to learned how to play here and do damage on the Division I level.

“But we like to think over the next three or four years, that was worth it. Strategically, it’s the right move to get where we want to get. We have to think more long-term. Up until this time, we were using a steady mix of high school and junior college guys and it was holding us back a little bit.”

Fort Wayne just wrapped annual fall workouts with the Blue-Black intrasquad series with teams captained by sophomore infielder Travis Upp and junior pitcher Damian Helm on one side and junior infielder Brandon Yoho and senior pitcher Brandon Phelps on the other.

“We got after it somewhere in the middle of September,” says Pierce. “We’ve been grinding it out until this (past) weekend.”

Pierce, assistants Grant Birely and Connor Lawhead and the Dons will continue work in preparation for the 2018 campaign.

As he goes forward, Pierce has the longest tenure as head coach in program history. Previous coach Billy Gernon (now at Western Michigan University) was also in charge for nine seasons.

Pierce, who turned 39 on Oct. 17, came to Fort Wayne with lessons learned as a player, assistant coach and head coach.

A Las Vegas native, Pierce played for Rodger Fairless at Green Valley High School in Henderson, Nev. Fairless coached 12 state championship teams at three Nevada schools. He helped develop Greg Maddux before going to Green Valley and turning that school into a diamond powerhouse. With the Gators, he produced a state champion in the program’s third season. Two Green Valley players — Chad Hermansen and Dave Krynzel — went on to the big leagues.

Clint Myers was Pierce’s head coach at Central Arizona. National Fastpitch Coaches’ Association Hall of Famer Myers won more than 1,000 games as a baseball and softball coach with a number of national titles to his credit.

“I’m very fortunate to come from a very good pedigree of coaches,” says Pierce. “(Fairless) was super disciplinarian and fundamental coach and that was a great start for me. I got indoctrinated in it during my high school career. (Myers) taught me a team management perspective.”

Through structured live play drills in practice, Pierce is able to grow a player’s intelligence in playing the game — something he gained from Myers.

Pierce considers Gary Ward one of the best offensive-minded coaches of all-time and styles his Fort Wayne offense based in the Hall of Famer’s philosophy.

After he was done playing (he developed a labrum injury at New Mexico State), Pierce had planned to become an accountant in Albuquerque.

But fate intervened — hiring was curtailed after Sept. 11, 2001 and he was asked to go back to college for more schooling.

“The early years were hard. I was cutting my teeth,” says Pierce. “But you have to cut your teeth and learn your craft somehow.”

Pierce explains why he has stayed longer in the position than anyone else.

“It speaks to the people I work with and the community,” says Pierce. “The city of Fort Wayne is great. My family (Bobby and Lizette Pierce have two children — Bobby Jr., and Daycee) has grown roots and really love it here.

“I’ve been very fortunate to coach some student-athletes and been around great people. I love this job and I love baseball.”

Fort Wayne pulls many players from northern Indiana and the Indianapolis area, but is able to draw from outside of the state with the school’s policy of out-of-state students paying 150 percent of what in-staters pay.

“Before, we couldn’t afford out-of-state players,” says Pierce. “Their dollar goes further now. Indiana residents are still cheaper on our books. We target Indiana kids. We still like home cooking. We try to turn rocks up here.”

NCAA Division I allows 11.7 scholarships for baseball. Pierce says that of the 35 players on the roster, 27 of them can be on scholarship and those are broken up based on a number of factors, including performance and need.

“There is no such thing as a full-ride,” says Pierce.

Like most programs, most money goes to pitchers and then to the interior of the defense (catcher, shortstop, center field).

“We think we can do a good job of developing hitters,” says Pierce. “We spend the majority of our money in pitching.”

Balance must also be considered.

“Like pro baseball, if you overspend in one area, you are going to be light in another area,” says Pierce. “It becomes a numbers game.”

Pierce is proud to say that the Mastodons have performed well in the classroom with three straight years of 3.0 or higher (on a 4.0 scale) as a team grade-point average. All players are encouraged to graduate in four years and take 15 hours in both the fall and spring semesters.

To help them meet their scholarly goals, schedules are made to limit the amount of missed class time. There is an academic advisor, study halls and the resources of the Mastodon Academic Performance Center.

“I’ve proctored exams,” says Pierce. “Professors on our campus are willing to work with us. We’ve got it figured out.”

But it’s not like the first few years of NCAA Division I status as an independent. That’s when Fort Wayne was on the road for all but a handful of its 56 regular-season games away from Mastodon Field. Having no conference ties meant a berth in the NCAA tournament was virtually impossible.

One former Don player is seeing the world while still playing the game. Caleb Fenimore, a senior catcher on the 2014 team, was recently named the top hitter in the North in the German Professional League. The Rushville Consolidated High School graduate has played in Germany in the summer and Australia in the winter. 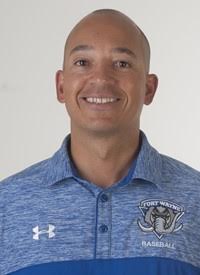