The Sycamores (29-22) go to “Big D” to play Southern Illinois University on Wednesday, May 23 with their own “Big D.”

Dane Giesler, a 6-foot-2, 230-pound redshirt senior first baseman, who smacked home runs in the first and third games against Valpo to raise his season total to 14 and his ISU career roundtripper mark to 32 and moving him into a tie for fourth place all-time Sycamores history with Tyler Thompson.

“I’ve been working with (head) coach (Mitch) Hannahs and my other coaches, trying to pay attention to the fine details and implement them into the game,” says Giesler, a left-handed swinger who takes a .298 average with one triple, seven doubles, 43 runs batted in with a .584 slugging percentage and .427 on-base percentage into the Valley tournament. “For the past couple of years, I’ve been getting pitched a lot tougher. I had to make some adjustments, figuring out pitches and what pitches I’m going to get thrown to me in different counts.”

With 31 homers the past two years, does the 2012 Jasper High School graduate consider himself a power hitter?

“I guess so,” says Giesler. “I’ve been around the game my whole life and being a big kid kind of helps.”

Hannah’s has watched Giesler improve at recognizing pitches and hitting them hard.

“He’s gotten better at handling all pitches and in all zones,” says Hannahs. “That’s where you’ve seen the jump in his power numbers.”

Giesler (proounced GEESE-ler), who played summer collegiate baseball for the Acadiana Cane Cutters (Louisiana) in 2016 and Terre Haute Rex in 2017, has been productive at the plate for years.

Playing for an Indiana High School Baseball Coaches Association  Hall of Famer in head coach Terry Gobert, Gielser helped Jasper to a IHSAA Class 3A state runner-up finish as a sophomore in 2010.

He represented the Wildcats in the IHSBCA North/South All-Star Series as a senior in 2012, the same year he was an IHSBCA honorable mention all-state selection and also counts the Indiana Prospects travel ball organization among his baseball stops.

Before landing in Terre Haute, Giesler spent the 2014 season at Wabash Valley College in Mt. Carmel, Ill., where he hit .365 with six homers, 13 doubles, 53 RBI and 49 runs scored while also earning Academic All-American honors for the Rob Fournier-coached Warriors.

So Giesler, 25, has understood what it means to play at a high level for a long time.

“That was bred into him before he ever left Jasper or ever left Wabash Valley,” says Hannahs. “We got the benefit of a guy who was mature when he came into our program.”

“The guys who have already had that in the high school setting are ahead of those who have not.”

What did Giesler gain at Jasper?

“Just the high expectations you have to play with there,” says Giesler. “Every team’s coming to beat you. It’s a well-known team throughout Indiana. Everybody knows who you are. You ain’t going to get a bad game from any team.

“You have to come ready to play everyday.”

Dane, the son of Jeff and Angie Giesler, has had family members who know the college baseball experience.

Older cousin Neil Giesler, who collected 138 hits for Jasper and played at the University South Carolina.

“I looked up to my cousin Neil quite a bit, watching him grow up,” says Dane Giesler of the Greater Evansville Baseball Hall of Famer.

Younger cousin Mark Giesler took to the diamond at the University of Dayton.

Fournier’s Wabash Valley clubs competed against those led by Hannahs when the current ISU head coach was in charge of the Lincoln Trail College Statesmen.

“He does a very good job with his club year in and year out,” says Hannahs of Fournier, who picked up his 900th career coaching win this spring.

“Rob taught me how to compete,” says Giesler of Fournier. “You go out and play because you love the game (in junior college baseball).

“There’s nothing pretty about it.”

Giesler, who graduated with a degree in business administration, has thoroughly enjoyed being a teammate at ISU.

“It’s the team camaraderie and getting to know new guys every year and they become best friends during the season,” says Giesler.

Giseler and his buddies are the No. 4 seed in the MVC tournament. Southern Illinois is No. 5. The event at Dallas Baptist University’s Horner Ballpark has two, four-team brackets in a double-elimination format. The winners of the two brackets will play in the championship game Saturday, May 26. The tournament will receive an NCAA Division I tournament bid.

And what about Giesler’s baseball career after college?

“If a (professional) team will give me a shot, I’d love to play,” says Giesler. 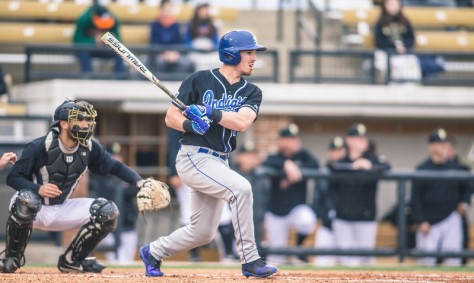 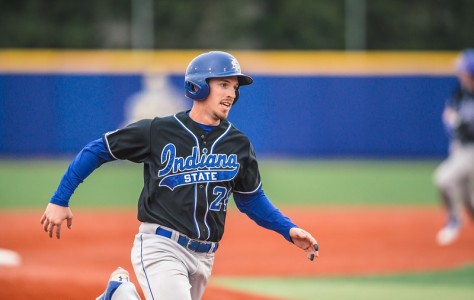 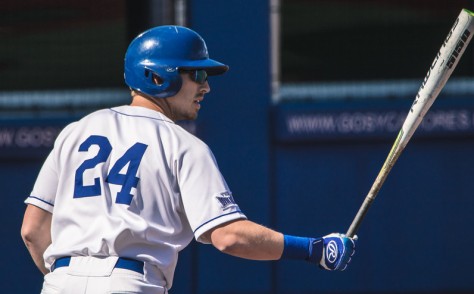