Going through a tough stretch at the end of the 2017 high school baseball season has paid off for the 2018 Morgan Township Cherokees.

In Cory Mack’s first season as head coach, he took over a program with just two returning varsity starters.

“The other boys were being educated with every game that we played,” says Mack.

Morgan got off to a 15-3 start before hitting a stretch of bigger schedules. Losing one-run games to Valparaiso, Hobart and John Glenn along the way, the IHSAA Class 1A Cherokees (about 250 students) lost nine straight and finished 15-12 in 2017. “It taxed my boys mentally.”

Having gone through that, Morgan did not experience that kind of skid this spring.

“There is maturity,” says Mack. “They know how to make those adjustments that are necessary to right the ship.”

“(The loss to Washington Township) burned in the pit of their stomach,” says Mack, who admits to getting upset during that contest. “It may have fueled the fire for sectional.

“The guys could not have played a more fundamentally-sound game (in the rematch).”

Morgan has plenty of speed and base-stealing threats.

“We force the issues to make things happen,” says Mack. “As long as we can put a guy on base, we can score without a hit.

“We make something happen when nothing is really working.”

Even though only two seniors are gong to the next level for athletics, most are college-bound.

“They’re all intelligent kids,” says Cory Mack. “Sometimes they think too much and don’t react enough.

“Athletes play off their gut and not their brain.”

A 1991 LaCrosse graduate, Mack played four seasons of baseball for the Tigers. His head coach was Bill Drook. He spent a couple years in college before coming home to begin raising a family.

Many of his teammates and opponents are playing or have committed to play at the NCAA Division I level.

“I was trying to expose my son to as many conditions and as many different styles of teammates as I could,” says Mack. “Drop him in anywhere and you’re going to get the same performance.”

For his folks, it’s a chance to do something they really love — spend time together at the ballpark.

“We’re baseball junkies,” says Cory Mack. “We live for this stuff. For my wife and I, it’s like vacation. It’s fun to watch a kid who loves playing. We’ve been everywhere with this kid.

Colin Mack has played  multiple times at places like the ESPN Wide World of Sports complex and East Cobb. His club won a title in a 106-team tournament at Cooperstown Dreams Park.

In all of his years of coaching and watching travel baseball, Cory Mack has witnessed too many younger kids throwing breaking balls.

“A lot of coaches letting kids throw curve balls way too soon,” says Mack, noting that the strain takes its tolls on arms, muscles and ligaments that are still developing. “Guys rely on a curveball before they can locate a fastball. The curveball is just putting miles on an engine. Every dad in the world needs to teach his kid to locate a fastball and throw a straight change.

“Kids always think the curve ball is sexy, but the only thing it does is slow the ball down. The change-up does the same thing.” 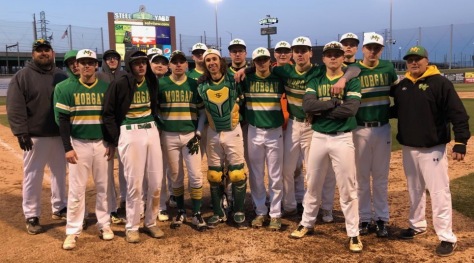 Cory Mack (far right in top photo and far left in bottom photo) is in his second season as head baseball coach at Morgan Township Middle/High School in Valparaiso. His Cherokees are in the IHSAA Class 1A Caston Regional Saturday, June 2.