Especially his last two seasons, the right-hander was able to throw all his pitches for strikes and was often able to put out the fire.

As a senior, he was named to the all-Mid-American Conference first team. He made 24 mound appearances (19 in relief) in the spring of 2019 and went 7-0 with five saves and a 2.19 earned run average. In 56 1/3 innings, Floyd used his two-seam fastball, four-seam fastball, curveball, slider and change-up to amass 55 strikeouts and 18 walks. He fanned a single-game career-high eight batters May 10 against Ohio University.

The Elkhart, Ind., native has taken those qualities with him into professional ball on the staff of the independent American Association‘s Gary (Ind.) SouthShore RailCats. He signed June 15 with Gary, where Greg Tagert is the manager and Alain Quijano the pitching coach, and made his debut June 16. He pitched the first two innings and retired all six St. Paul Saints batters he faced with two strikeouts.

“Consistency is the main thing for me,” says Floyd, 22. “I finally put it together at the end of my college career.

“My goal is summer is to keep working out to get stronger and keep competing. The only way to get better is the compete. I want to carry over my success against college hitters to pro hitters.”

Floyd’s change-up has arm-side sink and been known to devastate right-handed batters.

“When I throw it right I can get a lot of movement on it,” says Floyd. “It’s my go-to pitch.

“I’ve always thrown a change-up. But it got good during my college career.”

Ball State pitching coach Dustin Glant helped Floyd adjust his grip on the pitch which he throws like his fastball.

“It’s almost like a screwball,” says Glant. “He caught the spin axis just right. He can throw the change-up to both righties and lefties.”

Glant got to work with Floyd for his last three seasons with the Cardinals.

“I watched him progress as a pitcher and as a young man with his maturity and competitiveness,” says Glant.

Floyd says Glant has all his pitchers taking on a mentality and attitude of confidence.

“You know you’re better than the hitter and you’re going to get them out every single time,” says Floyd.

That competitive fire was especially evident in Drey Jameson, who was an All-American and the MAC Pitcher of the Year and selected by the Arizona Diamondbacks in the first round of the 2019 Major League Baseball First-Year Player Draft.

“We saw that and fed off that,” says Floyd, speaking for the rest of the BSU mound crew.

Glant saw Floyd morph into a relief role and embrace it.

“It’s give me the ball late and I’ll win this game for you,” says Glant. “He has ice water in his veins.

“His stuff got better and he became aggressive on the mound.”

Floyd has found comfort in chaos.

“I like getting thrown right into the fire,” says Floyd. “Adrenaline kicks in right away.”

“He cares about all his players — on and off the field,” says Floyd. “He’s steady. He’s got a lot of years of experience.”

While earning a degree in Finance this spring, Floyd made his third straight all-MAC academic team.

“I’m really good with numbers,” says Floyd, who carried a 3.39 grade-point average on a 4.0 scale during the spring semester.

He is now learning to adjust to pro ball with its long road trips and individualized training.

“There’s no school,” says Floyd. “For the first time, I can solely focus on baseball day in and day out.”

Floyd played three sports at Jimtown — four years varsity in baseball, three in basketball and two in tennis. His head baseball coach was Darin Mast. He gave up tennis after his sophomore year to play fall baseball.

The only child of Mill and Diana Floyd, Nick says he was fortunate that both parents could attend his games as he grew up while other families had to divide and conquer to follow their children.

Nick started at Baugo Little League in Elkhart. In his 11U summer, he began to play travel ball and was with the South Bend Predators, Michiana Clippers and Indiana Bearcats before landing with the Indiana Chargers during his high school years.

“That’s where I really got college contact,” says Floyd of the Chargers. 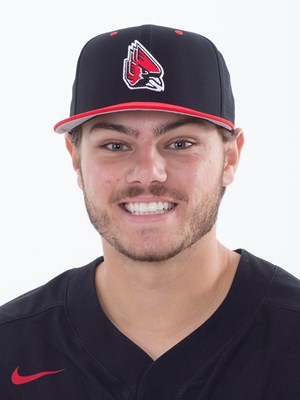 Tanner Andrews was on a pigskin path when the horsehide took over.

A three-sport standout (football, basketball and baseball) at Tippecanoe Valley High School near Akron, Ind., Andrews had made more than a half dozen unofficial campus football visits to Purdue University and thought he was on his way to playing receiver for the Boilermakers.

When his gridiron days at Tippecanoe Valley were over, he held just about every record — single-game, season and career — belonged to to Andrews.

He landed in West Lafayette alright. But as a baseball player.

“It’s God putting me right where I need to be,” says Andrews, who is now on the pitching staff of the Batavia (N.Y.) Muckdogs in the Miami Marlins organization.

While attending a clinic in Fort Wayne, Purdue pitcher Nick Wittgren (who is now also in the Marlins system and has spent time in the majors) saw Andrews pitch and arranged for him to throw a bullpen for Boilers pitching coach Tristan McIntyre. Purdue coaches liked what they saw and wound up signing Andrews.

“We did a lot of team bounding through hard work,” says Andrews. “We did a lot of early-morning running and were in very good shape. He pushed you beyond what you thought you could do.

“Coach Schreib gave me the opportunity to play baseball at the school I wanted to go to and that’s something I’ll always be grateful for.”

Wasikowski came in with an attention to details.

“All details matter to him,” says Andrews. “He puts his players in the best position to win.”

In his first two seasons, Waz led the Boilers to 29 and 38 victories. The 2018 team played in the Big Ten Conference championship game and participated in the NCAA Chapel Hill Regional.

Andrews played summer wood-bat baseball in college with the Kokomo Jackrabbits of the Prospect League and Kalamazoo Growlers of the Northwoods League.

His name was called in the 10th round of the 2018 Major League Baseball First-Year Player Draft by the Marlins. After one game with the Gulf Coast League Marlins, Andrews was assigned to Batavia in the Short Season Class-A New York-Penn League.

The next stops on the Marlins minor league road are Greensboro (Low-A), Jupiter (High-A), Jacksonville (Double-A) and New Orleans (Triple-A).

The 6-foot-3, 220-pound Andrews delivers the baseball from a high three-quarter arm slot.

Andrews considers his athleticism to be his best trait on the mound.

“I move pretty well and can field my position,” says Andrews. “I have good body control and fluid movement.”

Born in Rochester, Ind., Andrews played travel baseball for the Fort Wayne Indians from age 10 to 15 for coach Ray Moon, who played in the Cincinnati Reds organization and independent professional baseball.

After a travel season with the South Bend-based Michiana Clippers, Andrews used his summers to concentrate on football and basketball.

His head football coach at Tippecanoe Valley was Jeff Shriver while Indiana Basketball Hall of Famer Bill Patrick guided Andrews and the Vikings on the hardwood.

With friend and classmate Ben Shriver (the coach’s son) at quarterback, Valley footballers were a close-knit group.

“It was a family atmosphere,” says Andrews. “You were focused on the guy next to you. That’s the way it is in all sports, really. When you do that you get more out of yourself.”

Andrews credits Patrick for getting the most out of him and his teammates.

“Coach Patrick pushed us mentally and physically in practice,” says Andrews, who played all over the court and scored over 1,000 career points. “He prepared me for what I’m going through now.”

Andrews says what he enjoyed most about his high school baseball days was the two years he got to be teammates with older brother Brody Andrews (Class of 2012).

“It was fun to go tot he park everyday with my brother and best friend,” says Tanner.

Todd and Marget Andrews are parents to Brody and Andrew and their cousin Nico (9) is also part of the household.

Tanner graduated from Purdue in May with a degree in organizational leadership.

“I want to go into coaching and that goes hand-in-hand,” says Andrews, who learned about reading with change, making adjustments, solving problems and dealing with people.

Tanner Andrews, a Tippecanoe Valley High School and Purdue University graduate, is in his first season of professional baseball with the Batavia (N.Y.) Muckdogs in the Miami Marlins system. (Purdue Photo)

Like the Tom Petty song, Chad Whitmer “won’t back down” on the pitching mound.

The 6-foot-3, 195-pound right-hander showed that growing up in northern Indiana and has kept that approach as a collegian and now a professional.

He was selected in the 10th round of the 2017 Major League Baseball First-Year Player Draft by the New York Yankees.

Whitmer played for the Gulf Coast League Yankees in 2017 and was traded to the Milwaukee Brewers organization in June. He is now with the Short Season Class-A Helena (Mont.) Brewers, where Nestor Corredor is the manager and Rolando Valles the pitching coach.

Through July 10, Whitmer had made six appearances (all in relief) and was 2-1 with a 0.00 earned run average, eight strikeouts and three walks in 7 2/3 innings.

What about the change in pro organizations?

“I like it here a lot,” says Whitmer of landing with the Brewers in Helena. “They’ve made me feel welcome.

Born in South Bend, Ind., Whitmer played at Mishawaka Southwest Little League until he was 10 then was part of a core of travel baseball players who spent years with the Todd Marazita-coached Michiana Clippers (Marazita now coaches for the Michiana Scrappers).

“(Dikos) instilled a lot of mental toughness with all the hard work we did,” says Whitmer. “That’s all stuck with me. In the off-season, we had really tough morning workouts. He helped me get to the next level by learning how to work.”

Sean Galiher was the Kingsmen’s pitching coach at the start of Whitmer’s prep career then turned the reins over to Tom Stanton.

Whitmer, who turned 23 in May, credits both men with helping him fine-tune his mechanics and become more fluid on the mound.

Whitmer became the Friday-night starter for the Salukis midway through his junior season and held that spot through his senior campaign.

In 2017, Whitmer struck out 13 Indiana State batters, the most K’s by any SIU player since Finigan fanned 17 against Chicago State in 2005.

“One thing (Henderson and Finigan) preached a lot was being aggressive in the (strike) zone,” says Whitmer. “They made me a pretty competitor as well. Even if you don’t have your best stuff one day, you can still go out there and compete.

After his freshman season at SIU, Whitmer played summer collegiate ball with the Richmond RiverRats (now known as the Richmond Jazz).

Whitmer is close to completing a degree in sports administration.

Chad is the son of Doug and Sara Whitmer. His father is a web developer and mother an accountant. Older sister Valerie Whitmer was a track and field athlete at Penn and graduated in 2011.

Chad Whitmer, a 2013 graduate who pitched four seasons at Southern Illinois University, is now in the Milwaukee Brewers organization with Helena. (Helena Brewers)