“Without your mind, your body’s nothing. You can have the best swing in the world. But if your mental game is not on-point — a 0 out of 10 — that swing goes to waste. Without the confidence. Without the positive self talk. Without the mental toughness, it’s hard to be able to unlock your physical potential” — Diamyn Hall, Mental Game Development Coordinator for Wright State University baseball

Through his own experiences and continued study, Hall is helping develop the mental side for not only his NCAA Division I program in Dayton, Ohio, but his many followers on social media.

“It’s an unbelievable opportunity,” says Hall, who joined a coaching staff of “go-getters” led by Jeff Mercer (a graduate of Franklin Community High School in Indiana) and also features assistants Matt Talarico (Fort Wayne Bishop Dwenger graduate), Nate Metzger, Alex Sogard, director of operations Denton Sagerman, volunteer Jacob Burk and athletic trainer Brad Muse. “I’m coming on to a staff where they already believed in the mental game. It’s not a situation where I had to convince them that this is something important. They had already bought-in 100 percent.”

“Hopefully, this can add a few extra wins to the column,” says Hall, an attendee at the American Baseball Coaches Association national convention, which drew more than 6,100 of all levels to Indianapolis Jan. 4-7. “Now, it’s a matter of executing this role in the best way possible.

“There’s no clear-cut way to do anything regarding the mental game. I’m individualizing for each player as best as I can with the resources that we have.

“I’m feeling my way around and figuring out how to balance efficiency and effectiveness in every situation possible,” says Hall. “It’s a matter of being able to manage the mental game with each of our guys. We don’t want them thinking too much, but we want them to have the tools to succeed.”

As soon as he was hired, Hall began building relationships with WSU players.

He meets with them one-on-one, as a team and in small groups (ie. pitchers or hitters). By using examples that players can relate to most, Hall sees the biggest potential for really driving the message home.

As the Raiders get ready to open the 2018 season Feb. 16 at Tulane University, Hall is loading the players’ tool boxes and setting their foundations. Once the season begins and the Raiders start playing games, he will be in the dugout as a quick fix.

It’s going to be more ‘observe and serve.’ If everything’s good, I’m not going to have to do too much. At the end of the day, you want to give them all of the tools so if you drop off the face of the planet, they’ll be able to use the things you’ve taught them and they’ll know what works for them and what doesn’t. I believe that Awareness Activates Ability.”

Hall counts it as extremely important, that players are competing one pitch at a time, controlling what they can control, staying in the present moment and keeping their confidence level and their teammates’ confidence as high as possible at all times.

Many baseball coaches are emphasizing the mental side and don’t realize it.

“If they talk about discipline, leadership, competing one pitch at a time and keeping your confidence high, they sound like a mental game coach,” says Hall, who says the mental game works best when it is ingrained in hitting, pitching, base-running and fielding and not looked at as a  separate entity.

To foster growth of the mental game, Hall suggests implementing as many competitions in practice as possible and making practice feel more game-like for the players.

“Now you’re bringing up the competitive nature,” says Hall. “It plays a big role in the culture, in which Coach Mercer has created.”

Hall filled up notebooks with his observations during his playing days and learned the importance of keeping the body relaxed under pressure.

“The higher the stakes, the more calm, relaxed and confident you must become,” says Hall, who wants players to get to the point where treat those moments not as high-pressure situations but as tests to see how well they have been working on the things that really matter.

“You want to be in that state at all times or at least as much as possible,” says Hall. “You need to practice those things in order to be able to implement those things during the game.”

Among Hall’s mentors is Dr. Charlie Maher (Sport and Performance Psychologist for the Cleveland Indians).

“I make sure I’m always learning the newest things through self-education,” says Hall. “When I’m driving, I don’t listen to music anymore. I usually listen to a podcast or an audio book. To some, music is what moves the soul. For me, constantly and serving, is what what moves my soul. It keeps me going.

“If I have a 13-hour trip to Louisiana for a speaking engagement that can be time for me to learn. I make sure I’m getting all the best information so that I’ll be able to use with our guys

“I want to be able to practice what I preach and maximize on every single moment and execute things one step at a time.”

Hall uses the analogy of a dresser. Pull all the drawers out at the same time and it tips over. Or pull out one drawer at a time; putting all of your focus and energy in that drawer, closing it, and then moving on to the next drawer.

“That’s what it means to compete one pitch at a time,” says Hall. “For me, it’s learning one thing at a time. The language is all the same, it’s just a matter of where we’re applying it.”

Hall shares his gained wisdom with more than 15,000 Twitter followers at @DiamynHall and upwards of 6,200 Instagram followers at diamynhall can be contacted through his website — DiamynPerformance.com. His girlfriend — Grambling State volleyball player Diemend Richardson — is expected to join the business soon.

“I do it for the players and coaches that want to get better,” says Hall. “It’s just kind of taken off.”

Hall began his baseball-playing career as a high school sophomore. He played at football powerhouse Kettering Archbishop Alter (the Knights won Ohio High School Athletic Association Division IV state champions in 2008 and 2009) and sustained a neck injury. Doctors found that he had congenital spinal stenosis (a narrowing of fluid in the spine) and would not clear him to play football again.

He turned to baseball.

“When I first started playing a lot of coaches told me, ‘you’re not going to be able to play at the next level,” says Hall, a 2012 graduate of Centerville High School. “‘You’re not good enough. You’re not skilled enough. It’s too late to pick this up.’

“Of course — in my mind — I believed otherwise. I worked my tail off day after day and was getting a decent amount of results. I was a 5-tool player, but I wasn’t get the results I thought I should be getting with the athletic ability that I had so I turned to the mental side of the game.

“I wanted to find an edge to be able to separate myself from everybody else — not only catch up to my peers, but pass them.”

The first mental game book Hall read was “Heads-Up Baseball: Playing the Game One Pitch at a Time (by Tom Hanson and Ken Ravizza)” and it gave him the foundation that led to his role as a mental game coordinator.

Drs. Hanson and Ravizza, who have come out with “HeadsUp Baseball 2.0,” were clinic speakers at the ABCA convention in Indianapolis. 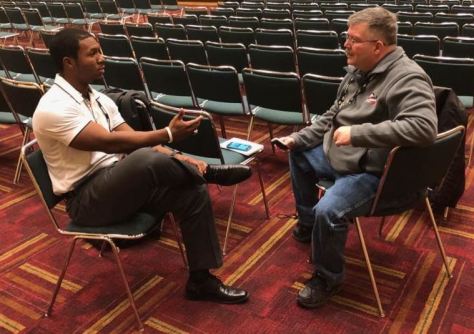