Working through the growing pains that come with a new program, Indiana University South Bend is looking to make its mark on the NAIA baseball landscape.

In their second year and with Mike Huling in his first year as head coach, the Titans are on a quest to be competitive in the tough Chicagoland Collegiate Athletic Conference this spring.

At the same time, IUSB looks to keep making progress as numbers and talent increases.

“It’s been a struggle, but right now we feel that we have the kinds of guys that we need moving forward,” says Huling, who was a Titans assistant in 2015-16. “They buy into our system. They believe in the vision that we have of winning baseball games.

“We want to play hard in our conference.”

The top two teams in the CCAC will earn an NAIA regional berth. Huling says the the teams to beat look to be Judson and Saint Francis (Ill.).

There are just five seniors — Trey Bickel (Mishawaka), Damon DeJesus (Fort Wayne), Luke Gaboury (South Bend), Chris Mangus (Niles, Mich.) and Sammy Nieves (Canovanas, P.R.) — on the IUSB current roster of 28 (down from around 45 at the beginning of the 2016-17 school year).

“Early in the season, we haven’t been good teammates and we’ve haven’t been playing for each other,” says Huling. “As a coaching staff, we’ve been trying to get them to buy into that type of thing because those things help you win baseball games. The good thing is we faced that adversity early when the games didn’t matter (before conference play). We feel we’re headed in the right direction.”

The Titans are off to a 9-10 start to the 2017 season, including 2-0 in the CCAC. An injury to right-hander Kyle Rago has depleted the pitching staff. Other hurlers have been asked to step forward and focus on throwing strikes.

“You definitely have to have pitching in this conference,” says Huling. “We play five conference games every week. We’re struggling to find five starting pitchers.”

Huling said details of a contract is being worked out to move to Newton Park in Lakeville and IUSB may be able to call that home within a few weeks.

“We had to juggle all those schedules,” says Huling. “Those are the kinds of things we had to deal with early on. It’s tough when we show up to the field and there’s a football practice in right field or we have to practice from 8 to 10 at night.”

As for the future, 17 recruits have already been signed for next season.

“We’re definitely excited about next year,” says Huling. “But I don’t believe in the ‘rebuilding year.’ We always want to compete every single year.”

Using his relationships while playing at the University of Southern Indiana (the Screaming Eagles won the NCAA Division II national title in 2010) and being an assistant coach at NCAA Division I Bowling Green State University has given Huling some recruiting ties around the country.

Recruiting in the South Bend area has been adversely affected because of the field situation. Most Indiana recruits have come from he Indianapolis area, but there have been signees from California, Texas, Ohio and Michigan.

“There’s so much unseen talent in California and Texas, it’s crazy,” says Huling, who has family in California and couples visits with recruiting. “Believe it or not, some of these kids want to come to the Midwest. If a major Division I institution doesn’t offer them anything, they don’t have anywhere to go.”

Huling, a 2006 Mishawaka High School graduate, had to work hard to been noticed as a player. He earned a spot at NCAA Division I Illinois State University, where he redshirted before transferring and playing two seasons at Glen Oaks Community College before landing at Southern Indiana for two seasons (2010 and 2011). USI is coached by Tracy Archuleta.

“He is one of my mentors,” says Huling. “He was an under-the-radar guy as a coach as well. He’s win two NCAA Division II national championships at the Midwest school (USI also won it all in 2014). I’ve learned a lot from him. Just his whole demeanor, strategy, on-the-field, off-the-field, discipline — all that sort of stuff.

The spring marks Huling’s third coaching in the NAIA. He was an assistant at NAIA Holy Cross College in 2015 before that program folded and he moved over to join the brand new IUSB program.

Other IUSB assistants include Matt Schwitz, who pitched at Holy Cross, and Chris Woodruff, who played outfield at Holy Cross and IUSB. Schwitz, who was also an assistant at IUSB in 2016, played at South Bend St. Joseph High School and Woodruff at Adams.

If he has his way, the NAIA will fall in line with the NCAA and do away with the re-entry rule and courtesy runners. 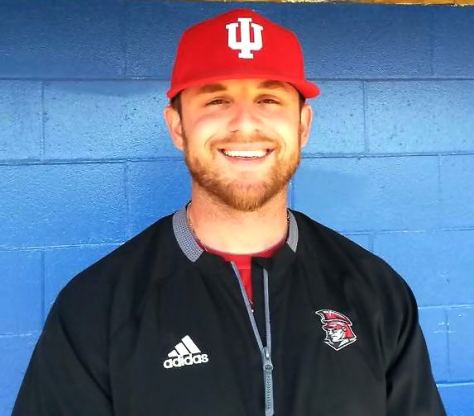 Mike Huling is in his second season on the Indiana University South Bend baseball coaching staff — his first as head coach. He is a Mishawaka High School graduate.