Ever since Doug Schreiber became a baseball coach, he has been working with young people.

Schreiber, a 1982 LaPorte High School graduate and the third child born to 13-time Hall of Famer Ken Schreiber and wife Judy, is now passing along his wisdom to slightly younger athletes in his first season as head baseball coach at McCutcheon High School.

“We’re trying to teach all the things that are going to help them at the next level and for the rest of their life, too,” says Schreiber, who had his Mavericks off to strong start in 2018 (14-3 overall and 8-0 in the North Central Conference). “We’re learning. Even though we have 13 seniors (Butler University commit Kollyn All, Evan Allen, Caleb Ely, Dylan Henning, Steven Krick, Parker Lamb, Darren Lathrop, Kobe McNeely, Ben Miller, Anderson University commit Kyle Pendleton, Kaden Rice, Purdue commit Jackson Smeltz and Kelden Tyson), they’re all like freshmen a little bit because they’ve got to learn all new signs, philosophy, temperament.

Schreiber, 54, has witnessed a resilient team.

“We’re a team that can beat anybody in the state, but we’re also a team that can lose to anybody. You’ve got to be attentive to detail and that’s something we could be a little sharper on.

“We’re not a attentive to detail as I want. But any coach is probably going to stay that.”

Using baseball as a platform, Schreiber has helped the Mavs grow up.

“We always talk about maturity being an important part of what we’re trying to do,” says Schreiber. “You hear it a lot. Coaches in all sports say they like some of their leaders because they’ve finally matured and become leaders.

“Our jobs as coaches — as an adult — is to help them mature. I don’t care if they’re 16, 17 or 18, I’m going expect things out of them that’s going to bring some of that maturity level. That allows them to be able to understand their coaches, teachers and other people a little better. They see the other peoples’ perspective and not always things out of their own eyes.”

With a senior-dominated lineup, Schreiber has gotten contributions from the junior class.

There are sophomores, who Schreiber says could probably play on varsity, that are getting quality reps with McCutcheon’s two junior varsity squads.

“They’re getting to be the team leaders and stuff like that,” says Schreiber. “During the end of the season, they’re going to be moved up and see what it’s like to be in our dugout with our coaches.

“We’ve got kids who are working really hard and buying in.”

Brian Eaton was McCutcheon’s head coach in 2017. When Eaton left to take the athletic director job at Clinton Prairie just before the start of the 2017-17, it created an opening at the top of the Mavericks baseball staff.

“They approached me and asked if I’d be interested,” says Schreiber. “I had to see if it was going to work within my working life as well.”

Schreiber continues to work at Purdue as associate director of Outreach and Recruitment in the Technology & Innovation department.

Sarah Schreiber, Doug’s wife, is a guidance counselor at McCutcheon.

“It’s been a lot of time,” says Schreiber. “Because you don’t have a sports information director or a grounds crew (like in college). You wind up doing a lot of it yourself, which i love to do. You just don’t have a lot of time during the day.

“There’s not as much teaching time. You have to use game time to teach as well. We don’t have meetings in the off-season on the intangibles and life skills. We just can’t dominate their time like we can in college.”

Schreiber is incorporating those things at McCutcheon, but is sometimes doing it “on the fly.”

“When the other team makes a mistake, you have to point that out as a teaching moment for our guys,” says Schreiber. “You have to take advantage of all those things. If they do something good, you point it out.”

Schreiber has been teaching his players to take pride in their home field and the art of raking the infield and grooming the mound.

“It’s not about what you don’t have,” says Schreiber. “You have to focus more on what you have.

“It might not be the very best. But we try to keep it up and maintain it. The kids do work hard and they’re appreciative and grateful.”

Schreiber is grateful for his coaching staff which includes Kurt Schlicher, Tristan McIntyre, Justin Hartman and Ryan Wides at the varsity level and Brandon Fulk, Joe Richardson, Jeremy Boden and Dustin Anthrop with the JV.

Schilcher, a social teacher at McCutcheon, serves as hitting and bench coach for Schreiber and helps him navigate through high school concepts like re-entry. McIntyre, who played for and coached with Schreiber at Purdue, is Mavs pitching coach. McCutcheon alum Hartman also works with pitchers as well as outfielders and corner infielders. Wides, who played at Noblesville, works with catchers and outfielders.

Teams from the McCutcheon Youth Baseball League have been taking turns this season shagging flies during batting practice and being recognized at home games and getting a little taste of the high school experience.

“I like when the youngsters come out because they have more energy than any of us,” says Schreiber. “We’ve got to feed off that energy.

“Hopefully, it will become their passion. When something becomes your passion, you do learn all those little details I been talking about to be better.” 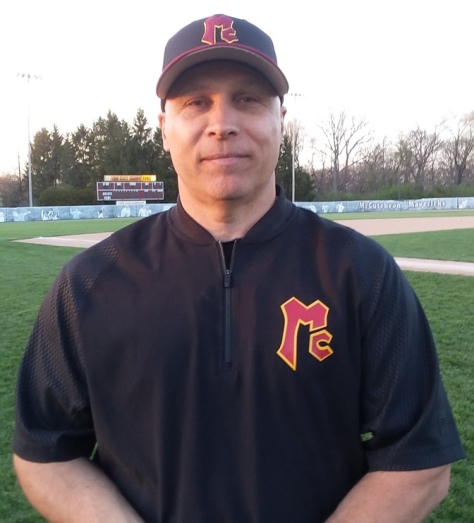 Doug Schreiber, 54, is in his first season as head baseball coach at McCutcheon High School in Lafayette. He was head coach at Purdue University for 18 seasons (1999-2016). (Steve Krah Photo)