There are less than two weeks before the University of Indianapolis is scheduled to open its 2019 baseball season (the NCAA Division II Greyhounds host Wisconsin-Parkside at 2 p.m. on Friday, Feb. 15).

Ready says probability can be applied to anything in baseball. He wants to put his players in the best position to have success and for hitters that translates to their approach.

“I have them watch the pitcher and what he’s throwing in certain counts,” says Ready. “We want guys sitting on the pitches they’re going to get, not the ones they want to hit.”

Pitch recognition — knowing a fastball from a curve, slider or whatever — is a valuable talent for hitters to possess.

Ready, who was a switch-hitting catcher for Indianapolis and still holds school records for most walks in a career and in a season and played in independent professional baseball, notes that most pro hitters adjust off the fastball because of the high velocity at that level.

He says that most high school hitters are timed for 80 mph with those in college for 85 to 90 mph and pros for 90 mph-plus.

“If you’re not ready for it, you’re not going to hit it,” says Ready. “If you don’t have pitch recognition, you have to be a fastball adjust hitter. You sit on pitches.”

In other words, you wait for a particular pitch to swing at.

Ready talks daily with his UIndy hitters about approach.

“I used to be a cookie-cutter approach guy and teach the same approach to everybody,” says Ready. “That simply doesn’t work.”

The Greyhounds employ an approach spectrum. For some, it as simple as “see ball; hit ball.”

“If that’s what’s going give that kid the best success rate,” says Ready. “I’m going to get behind that 100 percent.”

Others will sit on a pitch based on count, read pitcher tendencies in certain counts, look for grips, tipped pitches and take into consideration the game situation. How many outs? How many on base? What’s the score? Is it the first inning or the ninth?

While some hitters can rely on their physical skills for success, they are in the minority.

“The majority of us at this level have to be a smart hitter,” says Ready. “The best place to be on the approach spectrum is in the middle.

“If the (pitcher’s) throwing hard and you’re indecisive, you should be fastball adjust.”

To improve on this process, UIndy hitters do a lot of vision training and things of that nature.

They learn to recognize pitches thrown in pitcher-friendly and hitter-friendly counts.

“If it’s 1-2 and you have a fastball/slider pitcher, there’s a good probably you’re going to see a slider,” says Ready.

The coach would like his hitters to swing at pitches they can handle and hit with authority.

“You wouldn’t believe the number of kids at this level if they’re fooled on a pitch, they don’t swing through it,” says Ready. “They still try to make contact and hit in weakly.

“Swing through and go to the next pitch.”

Vision is of utmost importance to a hitter.

“You can work on your swing all you want,” says Ready. “If you’re not seeing the ball, you’re not going to hit it.”

One way, UIndy hitters work on their eye strength is with a concentration grid test.

With a dry erase marker, players are asked to find each number in order for time.

“At the end of that 6 to 10 minutes, their eyes are extremely tired,” says Ready, who notes that there are two basic kinds of eye focus — soft and hard. “You can only stay at hard focus for a split second before you blur up.”

These concentration grid tests done in different ways — sometimes counting by threes and getting as far as you can in five minutes — are done each week and posted for team competition.

The Hounds also do this with some distraction training.

Players will have a partner who will stand next to their partner say random numbers during the test.

“The main point is to improve the strength of your eyes,” says Ready.

While throwing regular batting practice, balls with red and green squares on them are thrown.

It used to be that players were supposed to swing at green and take on red.

“But with a good four-seam fastball with a high spin rate, you’re going to see red,” says Ready. “So green is take and red is swing.”

The pitching machine the Hounds use goes up to 100 mph.

Ready is more interested in quality at-bats and hitting the ball hard than what he calls the “internet statistics.”

“I don’t judge success by batting average,” says Ready. “I judge them by contact. Are you hitting the ball hard?”

It often comes down to pitch recognition/selection by the batter.

“I laugh when one of our young hitters have a great at-bat (hit a ball hard) and next time they come up and they fly out or strike out and say, ‘coach, what’s wrong with my swing?,’” says Ready. “It’s the same swing. You may have swung at the wrong pitch or didn’t see the ball as well. The first question you should ask: Are you seeing the ball?

“If they say they’re seeing the ball well: Are you swinging at pitches you should be swinging at or swinging at the pitcher’s pitches?.

“As coaches, we get a little to quick to fix problems that aren’t really there.”

Another way some teams help identify pitches is with occlusion training (GameSense is a company that offers tools for this visual reaction training).

Hitters watch videos of pitchers. They may be allowed to see half or three-quarters of the pitch and cut it off or when the pitcher is about to let go of the ball. This allows hitters to look for the release point, see the grip or spin or how it pops out of the hand.

“If it’s a slider, you’ll be seeing a dot at the halfway point,” says Ready.

With a senior-laden roster, Ready says pitch recognition is no necessarily something he is worried with his current team.

As a former catcher, Ready knows about framing pitches.

“Pitch framing’s important,” says Ready. “But you don’t frame everything — only borderline pitches.”

Catchers who try to jerk pitchers several inches outside back into the strike zone will quickly lose credibility with the plate umpire.

Ready says some catchers apply the “skinny and sway” method. But umpires are starting to recognize that and calling balls when they sway outside to catch the baseball.

Other catchers stand wide and only move their glove.

The Molina brothers — Bengie, Jose and Yadier — played behind the plate in the big leagues and it was Jose who was especially good at framing.

An overlooked aspect of catching is how far back they squat from the plate.

Ready contends that most are too far back. He understands that in pro ball, there a good reason because many hitters have a big back swing and catchers are at risk of getting hit by the bat so they get out of the way. But that does not happen as much at the college or high school level.

“The closer you can get to the pitcher the better,” says Ready. “That’s less distance the pitch has to travel.

“You’re going to get more calls. You’re in a position to stick that low pitch.”

By being too far back, catchers can miss out on some opportunities to frame some pitches and it’s a longer throw to a base when a runner is attempting to steal.

He kept track in a fall game and noticed that his catcher was up where he needed to be and the opponent’s was too far back. There were a dozen 1-1 counts — six for each team — the next pitch was low and UIndy got all of them called for strikes and the other side got them all called as balls.

Spray charts like those produced by Indiana-based Diamond Charts are helpful for teams in placing their defenders. Taking published play-by-play accounts from NCAA Division I and II games and data gathered from televised contests, opponents’ tendencies can be traced.

Ready says most coaches place their fielders where the majority of the balls are hit.

“I like to take it a step further,” says Ready. “I want to know how the ball was hit (fly ball, line drive, in front of the fielder or over his head).

“I like to place my fielders to take away the hits, not where the likely fly-ball outs are. That’s the logic I use when looking at a spray chart.” 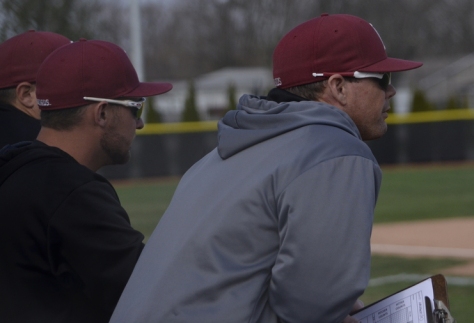