Coaches are in the people business.

To develop the athletes in their charge to the fullest, they must know what makes them tick.

Kris Holtzleiter, the pitching coach and recruiting coordinator for the Indiana Wesleyan University baseball program, discovered this before he was still a player at the NAIA school in Marion and he has applied it at his coaching stops.

He grew up in Upland, Ind., and attended Eastbrook High School outside Marion, graduating in 2002. Brian Abbott was the Panthers head coach and lefty-throwing Holtzleiter was a center fielder and pitcher.

“He was a great mentor,” says Holtzleiter of Abbott, who has long been pitching coach at Huntington University and the executive director of the Indiana High School Baseball Coaches Association. “He understand how to communicate with people and build relationships.

“Relationships are the fundamental piece to coaching baseball. It’s the whole purpose behind it.”

“He did not have a ton of resources at the time,” says Holtzleiter of DeMichael, who is now the school’s athletic director. “He was basically running the entire program by himself.

“Looking back, I am incredibly impressed. You have to be really organized to run a two-hour practice and do everything by yourself.”

Holtzleiter’s first two years in coaching were 2010 and 2011 at Eastbrook. The first year he was a varsity assistant and the second head junior varsity coach.

He was an IWU assistant to head coach Chad Newhard from August 2011 to December 2012 and was then hired as head coach at Southwood Junior/Senior High School near Wabash, Ind. He led the Knights for four seasons (2013-16).

The year before he arrived, Southwood went 1-26 and it had been many years since the Knights had won as many as 10 games in a season.

“There was not many expectations,” says Holtzleiter. “I began finding out what their goals were — individually and as a team.

“The biggest thing I learned (at Southwood) was about communicating and building relationships with the kids. If you do that, they’ll respond well to you.”

From there, Holtzleiter went back to Indiana Wesleyan to join a coaching staff led by Rich Benjamin.

He found another coach with the same foundation.

“He desires relationships,” says Holtzleiter of Benjamin. “He’s a good communicator. He wants to communicate openly and be honest with his guys.

“He’s also open about his faith.”

Through a common friend, Benjamin invited former National League Cy Young Award winner R.A. Dickey to lead a team devotional via video conference. Because of the COVID-19 Coronavirus pandemic that shortened the 2020 season to 19 games (the Wildcats went 10-9), coaches and players were communicating while practicing social distancing leading up to spring term finals last week.

The coaching staff, which also includes Brice Davis and Eric George, is now focused on recruiting at a time when players who lost most of this past season have been granted an extra year of eligibility.

“We try to find guys from multiple avenues that fit our program,” says Holtzleiter. “We look for guys who want to take a stride in their faith, are strong academically and can really play.

IWU’s staff will look at area high school players as well as transfers and those from the junior college ranks. This season, the Wildcats roster sported two players from Puerto Rico.

As pitching coach, Holtzleiter uses a mix of old school and new school.

Rapsodo is used to capture video to help pitchers with their delivery, sequencing, command and pitch design.

“We also work with feel to see why their pitches have certain movement and make adjustments,” says Holtzleiter, who has seen the Wildcats win 96 games since 2017. “It’s important for guys to pitch to their skill set and develop their strengths.

“Too many guys want to attack the opponents’ weaknesses instead of developing their strengths.” 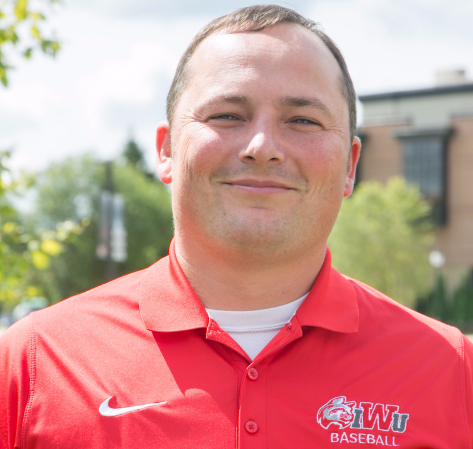