Two amateur umpires from Elkhart County will head to opposite corners of the map to make calls at Little League World Series events this summer.

Dale Rader from Elkhart and Jeff Wertz from Goshen are among the 92 volunteer umpires selected to work at the seven Little League World Series tournaments this year.

Rader has been an umpire for 25 years and does only Little League games.

Son Jeremy was 9 (he’s 34 now) and playing at Goshen Little League when Dale volunteered to help out the youngsters.

Raider knows the impression that can be made at the ballpark.

“The impact of coaches and umpires have on kids, you remember forever,” says Rader. “I always make it a positive thing. In 25 years, I’ve never thrown out a coach or a player.

“There’s always ways to handle situations so you don’t lose control. If you have to throw somebody out, you’ve lose control.”

Rader sees the conference at the plate with coaches as very important.

“We always go over the ground rules and look at the fences at a strange park,” says Rader. “And they know where I stand. I always tell the coaches before the game, there’s six calls that the umpire makes — fair or foul, safe or out, ball or strike.

“Those are judgement calls that belong to me. Let’s keep it that way.”

Like all good umpires, Rader studies to rule book. When it comes to rules, the call has to be right.

This year marks Rader’s second assignment to a Little League World Series site. In 2013, he made calls at the Junior Baseball World Series in Taylor, Mich., a suburb of Detroit.

“It was one of the best experiences of my life,” says Rader, who remembers the ESPN trucks and how all the teams were housed together in the same hotels. There were players from the Czech Republic, Chinese Taipei (formerly Taiwan), Curacao and more.

“All those kids found a way to communicate when they were off the field and none of them could speak each other’s language,” says Rader. “It was really something to see.”

Raider remembers how each batter from Chinese Taipei would bow to him as they approached the plate.

He was in a crew with umpires from Germany, Puerto Rico and

Venezuela. The families got to know each other and had a grand time.

Three Raders — Dale, wife Cathy and 10-year-old son Ryne — are going to see what the 2018 Senior League Baseball World Series is all about.

Besides Jeremy and Ryne (who is heading into the fifth grade at Jimtown Intermediate), Rader has three other children — Carrie (39), Dale (31) and Wesley (30).

Wertz has been umpiring for 12 years.

He coached and managed at Goshen Little League for a few years and  saw the league was having trouble finding volunteers — especially umpires.

So he offered his services.

“I enjoyed it, people appreciated it so I stuck with it,” says Wertz.

To qualify for Little League World Series, an umpire must be recommended by their district administrator (in the case of Rader and Wertz, it’s Marlin Culp in District 14) and work a regional tournament.

Wertz had officiated at a few baseball and softball state tournaments and saw himself as ready to represent his district at a regional. He applied and was assigned at Kalamazoo, Mich.

An umpire supervisor recommended Wertz for the Intermediate World Series, he applied and was accepted to go to Livermore.

It’s going to be special in a few ways.

Besides the experience of working a big event, Jeff gets to take wife Tracy to the state where she was raised. The couple plan to head out early and see relatives and sites before the tournament.

“We’ll see some of the places she visited when she was growing up,” says Jeff. “I’ve never been to San Francisco.

“I’m excited to represent the umpires from our area and do a good job for the kids, give them a good experience.”

Jeff and Tracy have three children. Nathanael Wertz just completed his freshman year at Indiana Institute of Technology (Indiana Tech) in Fort Wayne. Philip Wertz just finished his fourth year of varsity baseball at Goshen High School and is bound for studies and baseball at Grace College in Winona Lake, Ind. Kathryn Wertz is going into her junior years at Goshen High.

Jeff, who is employed in school psychologist by the Elkhart County Special Education Cooperative, has been the public address announcer for Goshen RedHawks baseball at Phend Field for the past few seasons.

“It’s someone who’s fair with a good, even temperament,” says Wertz. “You’re out there for the right reasons — for the purity of the sport, for the love of the game.”

“I have nothing but positive regard for Dale,” says Wertz. “He was our most experienced and knowledgable umpire.” 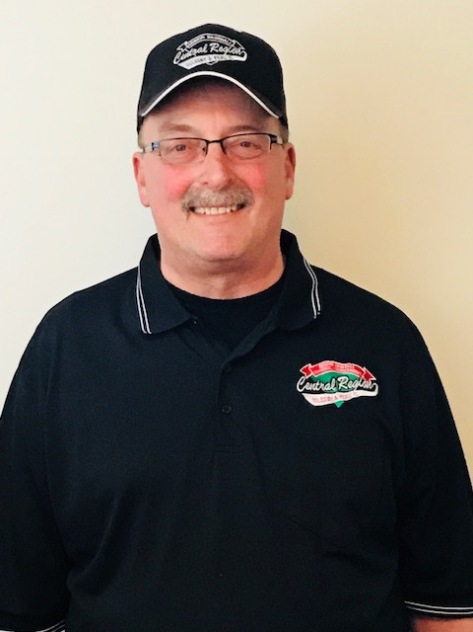 Dale Rader, of Elkhart, Ind., has been assigned as an umpire at the 2018 Senior League Baseball World Series in Easley, S.C.

Jeff Wertz, of Goshen, Ind., has been assigned as an umpire at the 2018 Intermediate League (50/70) Baseball World Series in Livermore, Calf.