“Way to get off the bus, Gus. Scoring runs is fun!”

Miller has brought enthusiasm to the diamond for much of the organization’s long history.

The Rockets — started in 1959 by Dick Runkle and continued by Ray Miller (Randy’s father) — celebrated 60 years of diamond fun and memories in 2019. That makes it one of the longest-running continuous teams in amateur baseball.

“We go back to our 1960’s roots,” says Portland manager Randy Miller, who has seen the Rockets square off against squads from Albany, Geneva, Dunkirk, Elwood, New Castle, Upland, Yorktown and beyond. A rivalry with the Gas City-based Twin City Bankers is well-chronicled in Bill Lightle’s book “My Mother’s Dream.”

When the Rockets began, they were comprised of players from Portland and later fanned out from Jay County.

“We’re still townball,” says Miller”. We just come from a lot of towns.”

The oldest players were Waters (35), Chris Gaines (33), Zeth Tanner (29), Codey Harrison (28) and Craig Martin (28). The rest were under 25 with seven teenagers. Waters is the director of operations at the Jay County Community Center.

A graduate of Jay County High School and Manchester College, Waters played for the Kalamazoo (Mich.) Kings of the independent Frontier League.

“Our guys are some of the best athletes their high schools have ever had,” says Randy Miller. “They’re gamers.

Miller, 65, began playing for the Rockets in 1972 and caught a doubleheader at 51. By the 1990’s, he was sharing manager duties with his father and has continued helped continue the tradition.

“I’ve got a motorcycle and a boat,” says Miller, a former teacher at Adams Central High School in Monroe, Ind. “I’m not on them very much in the summer.”

Runkle had the Rockets competing in the old Eastern Indiana Baseball League. Local talent included Steve Takats. His Ball State University teammate, Merv Rettenmund, played for Portland in 1966 and made his big league debut as a player with the Baltimore Orioles in 1968 and was an MLB hitting coach for many years.

With the team in financial trouble, Ray Miller took over in 1972. He doubled the schedule and included games with Fort Wayne teams.

With the support of wife Betty, Ray helped secure a playing facility in Portland that is now known as Runkle-Miller Field.

“Mom was always there with a sandwich and a cold beverage,” says Randy Miller of his mother, who served 16 years as city clerk.

In 1984, the Rockets merged with the Bank of Berne Lancers and went 34-20. The ’85 season was the best to date at 41-14 with Portland’s first-ever American Amateur Baseball Congress state title.

Ray Miller died in 2017 and was inducted into the National Semi-Pro Baseball Hall of Fame in 2008. Randy Miller was enshrined in 2011.

With Randy Miller, siblings Brad Miller and Mickey Scott and many community members pitching in, the Rockets have survived. Mickey, who was city clerk for 12 years, used to run Runkle-Miller’s “Rocket Lunching Pad” concession stand and now Brad does it.

All three Miller offspring have taken turns watering the field. The baselines are seeded to help with all the excess rain.

For years, the Rockets were purely a family-funded operation.

Since the mid-1990s, the Rockets have swung wood bats. At first, Randy provided those. But that got too expensive and now the players provide their own clubs.

For $100, the team picks up the cost of caps, uniforms and handles insurance.

Randy Miller carries on a tradition by giving the “Rocket Report” on WPGW 100.9 FM on afternoons following games. Samantha Thomas, who once worked for the Fort Wayne TinCaps, is involved with keeping score and other team functions.

The Rockets coaching tree spreads far and wide, especially along the U.S. 27 corridor.

“They want to give back to the game,” says Miller. “We are a baseball town. I really believe that.”

A 60-foot “Wall of Dreams” mural on the side of Portland’s Ritz Theatre was painted by Pamela Bliss and dedicated July 28 and many alums and Rocket backers came to celebrate.

Wearing the gold and black, fans were in Fort Wayne to see the Rockets’ latest season come to a close.

But the fun is not over yet for 2019. The annual Rocket Rally golf outing is scheduled for Sept. 22 at Portland Golf Club. For more information, email Randy Miller at ramiller15@embarqmail.com. 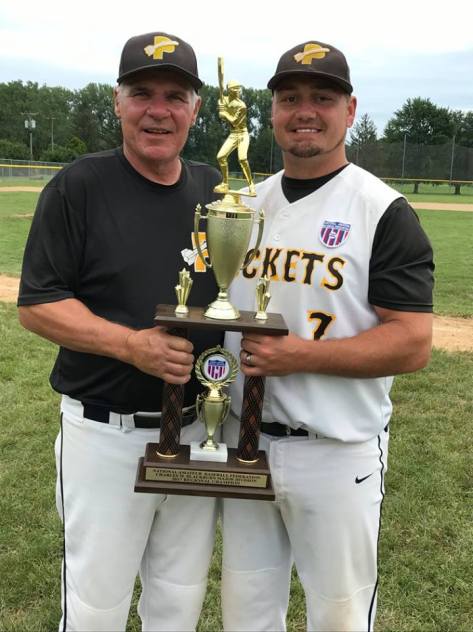 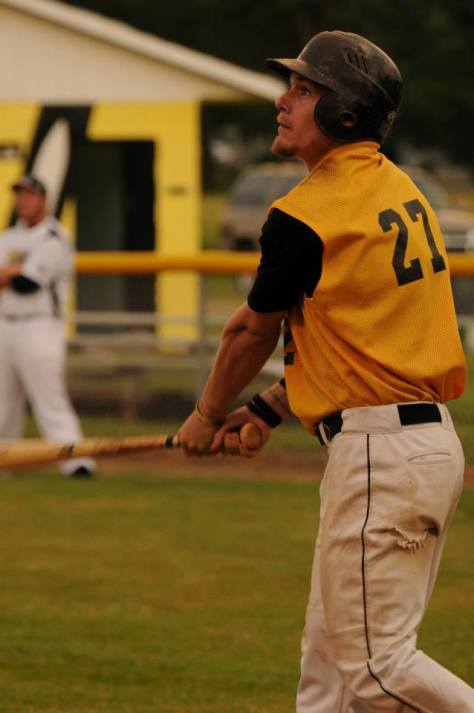 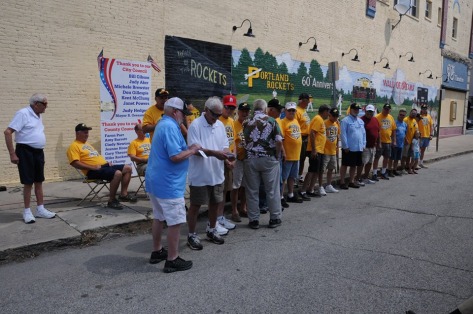 Former players and fans gathered July 28, 2019 for the dedication of a 60-foot “Wall of Dreams” mural and celebration of 60 years of Portland (Ind.) Rockets baseball. (Portland Rockets Photo) 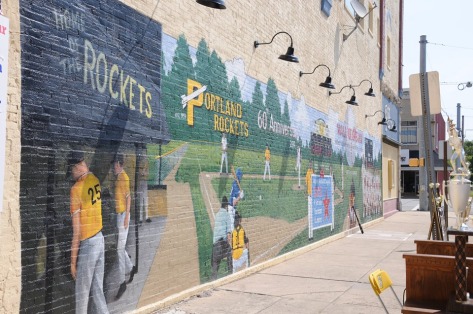 Artist Pamela Bliss created the 60-foot “Wall of Dreams” mural on the side of the Ritz Theatre in Portland, Ind. On Aug. 28, 2019, there was a 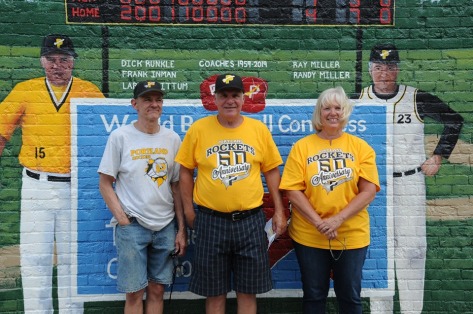 Siblings Brad Miller (left), Randy Miller and Mickey Scott stand in front of a “Wall of Dreams” mural in Portland, Ind., celebrating 60 years of Portland (Ind.) Rockets baseball. The mural behind them depicts Randy and their father, Ray Miller, who were co-managers for years. 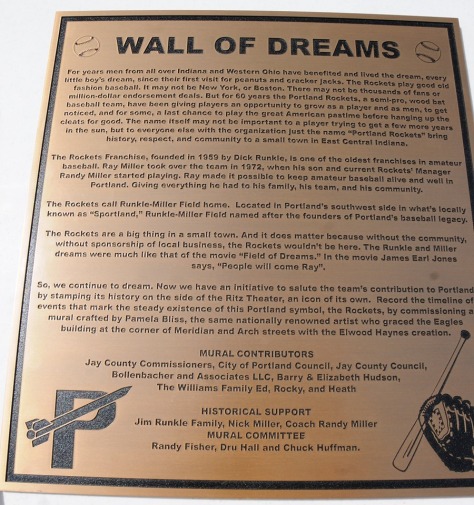 The story of the Portland (Ind.) Rockets baseball team and the “Wall of Dreams.” (Portland Rockets Photo)

Runkle-Miller Field received a $28,000 scoreboard in 2018. The field is home to the Portland (Ind.) Rockets baseball team, which has been around since 1959. (Portland Rockets Photo)