Sean Godfrey had been rounding the bases since his T-ball days at Mt. Tabor Park in New Albany, Ind.

Godfrey went on to a memorable baseball playing career.

The 26-year-old outfielder retired at the end of the 2018 season to seek the next chapter in his life, though he plans to stay connected to the game in some way.

“I’m definitely going to stay in baseball with coaching or giving private lessons,” says Godfrey, who has a business administration degree from Ball State University received in 2014.

Born in Indianapolis in 1992, Godfrey soon moved to New Albany where he played ball at Mt. Tabor until middle school when he began competing for local travel teams.

“Coach Mac” taught Godfrey and his teammates how to play the game the right way, to treat your teammates fairly and that details matter.

“Fundamental things are so important,” says Godfrey. “That stuck with me throughout my career.”

The right-handed swinging and throwing Godfrey was all-conference his last two prep seasons and honorable mention all-state as a senior when he hit .486 with seven home runs, four triples, 11 doubles, 54 runs scored and 26 stolen bases. As a junior, he hit .410 with five homers and 14 doubles. His sophomore season yielded a .365 average with 10 doubles.

In his high school summers, Godfrey played travel ball for the Evansville Razorbacks then the Louisville Baseball Club.

Godfrey considers Maloney one of his mentors and the two have remained close and still correspond.

“He was good at making it about the team and getting guys to work together and believe in each other,” says Godfrey of Maloney. “We practiced every little detail like running on and off the field. He doesn’t miss much.”

Scott French was a Ball State assistant in Godfrey’s last two seasons and he grew fond of the hitting/outfield coach.

“He was a great player’s coach,” says Godfrey of French. “He’d give you the shirt off his back if you need it.”

“It’s a difficult job he has,” says Godfrey of Bennett. “He has to find the players and loses some to to affiliated teams. He has to have a certain number of rookies and veterans. Things are always changing.

“(Independent ball) is more about winning. Guys are trying to win games and get a championship. It reminds me of college baseball. It was definitely enjoyable working with people toward a common goal.”

According to Frontier League rules, no player can be 27 prior to Jan. 1. Godfrey turns 27 on Jan. 2 and would have been eligible to play in the league in 2019, but decided to move on.

Sean is the oldest son of Chris and Jane Godrey and older brother of Andrew Godfrey. 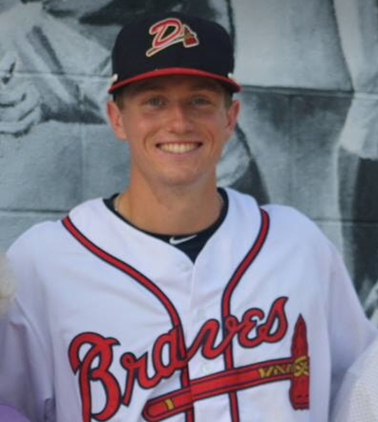 Sean Godfrey, a New Albany (Ind.) High School graduate, was drafted by the Atlanta Braves out of  Ball State University in Muncie, Ind. He played three seasons in the Braves system (2014-16) then two with the independent Schaumburg (Ill.) Boomers (2017-18) before retiring as a player.