Jack Campbell is in his 48th season as head baseball coach at Chesterton High School.

He keeps coming back at the Porter County, Ind., because he enjoys what each season might bring.

“It’s a challenge every year,” says Campbell, an Indiana High School Baseball Coaches Association Hall of Famer with more than 700 career victories, 19 sectional titles and three regional crowns to his credit since the 1971 season.

In 2018, Campbell faced the challenge of having five returning senior pitchers all likely to play college baseball and getting enough innings for each of them.

“It’s been a good problem,” says Campbell, who takes his 18-8 Trojans into the IHSAA Class 4A LaPorte Regional Saturday, June 2, after they bested Merrillville 17-0, Hobart 11-0 and Valparaiso 7-0 to win the 2018 Chesterton Sectional. “You like to win a lot of ball games. But when it comes down to it, if your kids can advance and get part of their education paid for that becomes really important.”

Those five arms bring a combined 31 feet, 5 inches to the hill.

Right-handers Austin Peterson (6-foot-6) and Grant Brunt (5-11) have committed to play at Purdue University while left-hander Brayden Cortwright (6-7) is headed to Western Illinois University and right-hander Chris Torres (6-4) to Wabash Valley College in Mt. Carmel, Ill. According to Campbell, lefty Stephen Gilbertsen (5-10) is considering a walk-on role at the University of Illinois.

Peterson, who has just one loss in his prep career, is the ace of the staff. He plays first base when he’s not pitching.

“There was nothing wrong with 10 innings every three days,” says Campbell. “I’ve been doing this for 48 years and I haven’t had any problems with arms. I was a pitcher.

“It’s not the pitches he throws as a pitcher, it’s what he does next.”

Going into the field after pitching and being asked to throw from deep in the hole at shortstop or from the outfield takes a toll on the arm.

Campbell says there’s bound to overuse by playing and working at baseball 12 months a year and using the same muscles.

“We only played 23 of the 28 games we could have played this spring,” says Campbell. “(Travel teams) are playing 50 and 60 games in the summer time.”

The pitch count rule came into play in the 2017 Chesterton Sectional championship game against Andrean.

The Trojans were leading the 59ers 3-1 when Peterson hit the 120-mark for the day (he pitched in the semifinals against Crown Point and relieved in the finals). With Peterson off the mound, Andrean rallied and won 4-3.

“Both teams are playing pretty well. It should be a good ball game,” says Campbell, whose team is hitting around .350 in 2018.

The second semifinal at the LaPorte Regional pits Northern Indiana Conference and backyard rivals Mishawaka and Penn. The championship game is scheduled for 7 p.m. CST.

Before that, conference games were played Monday, Wednesday and Friday one week and Tuesday and Thursday the next in a double round robin. That format allowed an ace pitcher to be used more often.

Campbell kids if the current conditions were applied when Ken Schreiber was racking up 1,010 victories and seven state titles at LaPorte, he might not have as much hardware.

Looking back to 1976, John Vail and Arden Smith regularly started conference games and used their 10-inning limited on two-game tournament days. One would start and the other would relieve in the morning and then they’d do it again in the championship game.

“Schreib, he was the best tournament coach I’ve ever seen,” says Campbell of the 13-time Hall of Famer who passed away in 2017. “He was the master.”

There’s another reason Campbell does not like the current restrictions.

“Limiting things — pitching-wise — hurts statistics when you nominate for all-state or all-stars,” says Campbell. “In some places, they have more opportunities to pitch. The pitch count rule, it’s just wrong.

“There was nothing wrong with the way the rules were to begin with. Look at football. With concussions, how can you let a kid carry the ball 35 times? In basketball, you should limit the number of 3’s because you’re hurting the shooter’s arm. How many spikes do you get in volleyball?”

Campbell has enjoyed loyalty from his athletes over the years. Just the other day, he received a text that reminisced about the Trojans’ 1988 regional champions.

Campbell graduated from Lake Station Edison High School in 1962. He went to Indiana University on a basketball scholarship. In the days before freshmen could play on the varsity in college, he won one letter in basketball and three in baseball.

He played for two Hall of Famers — Branch McCracken on the hardwood and Ernie Andres on the diamond — and led the Big Ten Conference in hitting (.361) as an all-conference first baseman during his senior season of 1966.

Campbell began his career as an educator at Valparaiso, working his way up from junior high to high school coaching positions.

After 3 1/2 years in Valpo, he started teaching physical education at Baily Elementary in Chesterton. This is his 48th year in that role.

For the past 30 winters, he has also been Chesterton’s head girls basketball coach and amassed 369 victories, three sectional championships and one regional title. His Trojans went 20-3 in 2017-18 and shared Indiana Basketball Coaches Association District 1 Coach of the Year honors.

Jack and Carol Campbell have four daughters — Carrie, Jill, Jackie and Cat. All four played basketball at Chesterton for their father. Jill went on to play basketball and softball at Valparaiso University, Jackie basketball at Colorado State University and Cat basketball at Indiana Wesleyan University. Carrie (3), Jill (2), Jackie (4) and Cat (3) have given their parents a dozen grandchildren. 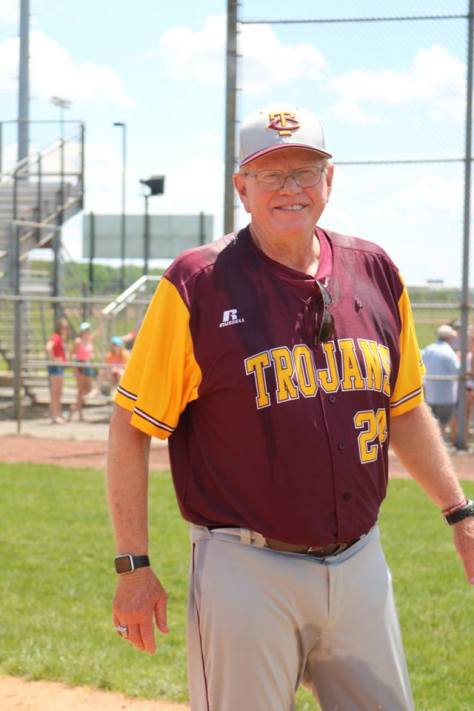 Jack Campbell has been the head baseball coach at Chesterton (Ind.) High School since the 1971 season.