But that didn’t stop Indiana State University coach Bob Warn from fielding competitive baseball teams back in the 1970’s and 1980’s.

Dick Grapenthin knows because he was there.

Grapenthin has been a sporting goods executive for the better part of the past 30 years. But as a right-handed pitcher from Iowa, he began his college experience at Mesa (Ariz.) Community College then toed the rubber for the ISU Sycamores in 1979 (leading the Missouri Valley Conference champions and NCAA regional qualifiers with 45 strikeouts) and 1980 (pacing the squad with nine wins, 53 strikeouts and 76 innings).

Grapenthin then went into pro ball and made it to the majors with the Montreal Expos.

“Bob had a lot of success bringing in blue collar grinders,” says Grapenthin of Hall of Famer Warn. “We had a really, really nice team and great work habits.”

To get time in the physical education center in the winter, the team often practiced from 5:30 to 7:30 a.m. then players went to their 8 a.m. classes.

“We’d use every part of an indoor facility for some type of drills,” says Grapenthin. “We always had something going on.”

Grapenthin, who was inducted into the Indiana State University Athletic Hall of Fame as an individual in 2016 after being honored for his involvement with the 1986 College World Series team in 2002, remembers ISU traveling to Florida to play the vaunted Miami Hurricanes.

“We didn’t have the talent those guys had, but we were very well-schooled in fundamentals,” says Grapenthin. “You had to do that. You couldn’t play as much (in the north) because it was cold out.”

On nicer days, the team would practice on the turf at Memorial Stadium (football).

Mitch Hannahs was on the 1986 ISU team and is now head coach. Grapenthin saw the team play last season at Vanderbilt, the team that went on to the win the College World Series. While the Commodores had the lights-out pitching arms, he saw more skill from the Sycamores.

“Mitch has done such a great job,” says Grapenthin.

After his playing days at ISU concluded in 1980, Grapenthin signed with the Expos as a minor league free agent. He came back to Terre Haute in the fall and winter to work out with and coach the Sycamores.

He made his Major League Baseball debut in 1983. He split the 1984 and 1985 seasons between Montreal and the Triple-A Indianapolis Indians, managed by Buck Rodgers and then Felipe Alou.

“A lot of those guys are still there,” says Grapenthin, noting that former president and chairman Max Schumacher remains involved with the club and radio voice Howard Kellman is still calling games for the Tribe — only its now downtown at Victory Field and not on 16th Street at Bush Stadium.

Grapenthin’s playing career concluded in 1989 and he spent two seasons as pitching coach to Bill Wilhelm at Clemson University.

Much of his focus with his pitchers was on mechanics.

“I focused a lot on trying to try to get kids in a position to make repeatable actions and be consistent,” says Grapenthin. “I taught from the feet up.”

Grapenthin learned much about baseball from Warn and Wilhelm. He also found out about how tough it can be to coach.

“That is a very hard lifestyle,” says Grapenthin. “Coaches make an unbelievable amount of sacrifices to be really good.

“I wanted more of a controlled family life.”

Dick and Cindy Grapenthin live in Alpharetta, Ga., north of Atlanta, and have three children — two daughters and a son. Alex is a Clemson graduate. Kristi is an Auburn University graduate. Trevor Grapenthin is a economics major and baseball player at Covenant College in Lookout Mountain, Ga.

Cindy Grapenthin holds a doctorate in psychology from Indiana State and has a individual and family psychology practice as well as being an assistant professor of psychology at Brenau University in Gainesville, Ga.

Dick Grapenthin earned his Master of Business Administration degree from the J.L. Kellogg Graduate School of Management at Northwestern University in 1993.

He worked for Easton for seven years then Mizuno for seven. In 2015, he started his own sports management and consulting business — BoneChip Enterprises — and consulted for Louisville Slugger for three threes then spent another nine with Mizuno.

“I love working with people who are passionate about the game,” says Grapenthin. “It’s a lot of fun.

“I’ve done that basically my whole life. It’s like you’re not going to work.”

“I wanted to do something unique,” says Grapenthin. “There’s not a lot of people focused on baseball/softball training gloves at a high end.”

He says one of the strengths of company is its knowledge of production and factories.

“I knew people in that industry and I just kind of like baseball gloves,” says Grapenthin. “I enjoy making nice stuff.”

Grapenthin does not consider himself to be a designer, but he does bring ideas to craftsmen and they make the adjustments in patterns and gloves. He relays feedback from players an coaches.

“There are always ways we can make gloves better,” says Grapenthin.

The PBPro website offers a custom feature that allows the buyer to build their own glove.

With 18 different thread colors and many webs and leathers, the options go on and on and on.

For Grapenthin, the game of baseball has to be fun.

And fun is what he’s having after all these years. 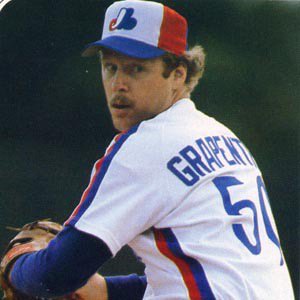 Dick Grapenthin, an Indiana State University Athletic Hall of Famer, pitched for the Montreal Expos 1983-85. He has long been a sporting goods executive and is the founder of BoneChip Enterprises and PBPro.