But the 6-foot right-hander has been preparing for pro ball since his sophomore year at Lawrence Central High School in Indianapolis.

That was 2013 and Montgomery was primarily a center fielder for then-Bears head coach Matt Buczowski.

“Started teaching me what the lifestyle was like and started preparing me for it,” says Montgomery of Buczkowski, who is now head baseball coach at Carmel (Ind.) High School and regularly trades texts with his former player. “I love Coach Butch. He’s a really good friend of mine.”

Buczkowski told Montgomery he needed to put in the time and effort to reach his potential.

“You can’t let anybody out-work with you,” says Montgomery of Buczkowski’s advice.

In his junior year, right-hander Montgomery got more more opportunities and struck out 96 batters in 63 innings with a 1.63 earned run average.

Staying loose and having fun were qualities Montgomery took from Roman.

Montgomery was selected in the 33rd round of the 2016 Major League Baseball First-Year Player Draft by the San Francisco Giants. He opted to stay in college and went back for his second season at Northwest Florida and pitched in 13 games (12 as a starter), going 8-2 with three complete games and a 1.87 ERA. In 82 innings, he fanned 82 and walked 20.

Raiders coach Doug Martin taught his players, including Montgomery, the meaning of work ethic and not getting to bring for one’s breeches.

“In Juco, everything is blue collar,” says Montgomery. “I was told to just stay humble and be the guy you are.”

In his one season at Central Florida, where Greg Lovelady was Knights head coach and Fort Wayne, Ind., native Justin Parker the pitching coach, Montgomery competed in 17 contests (eight as a starter) and was 6-4 with one save, one complete game and a 2.54 ERA. In 63 2/3 innings, he whiffed 74 and walked 21.

“(Lovelady) taught me about the mental game and dealing with failure,” says Montgomery. “Not everything is going to go your way. You deal with it

“You can only control what you can control. After you let go of the ball, you can’t control much unless it’s a come-backer.”

Montgomery credits Parker (who is now pitching coach at Indiana University) for helping him develop his off-speed stuff.

“I’ve always been able to throw hard,” says Montgomery. “(Parker) told me to find my grip and throw it with the same confidence as my fastball.”

Montgomery was chosen in the seventh round of the 2018 MLB draft by the Baltimore Orioles. After the one game in the GCL, he moved up to the Aberdeen (Md.) IronBirds of the Short Season Class-A New York-Penn League.

Throwing from a high three-quarter arm slot, Montgomery has touched 97 mph with both his four-seam and two-seam fastballs. He usually sits between 92 and 95 mph.

“I attack with the fastball then work in the off-speed (which includes a “circle” change-up, “spike” curveball and slider,” says Montgomery. “I have more control with the four-seam (which tends to have more revolutions than the two-seam).”

In his brief time in pro baseball, Montgomery has witnessed the difference between college and the minors beyond the raised level of talent and athleticism.

“In college, the schedule is more structured,” says Montgomery. “(In pro ball), you do what you need to get ready. It’s on you. It’s your career. It’s up to you whether you succeed or fail.”

Jarrett James Montgomery was born in Indianapolis (his parents are Alan Montgomery and Crystal Walton) and played at Oaklandon Youth Organization and Skiles Test Baseball. He played travel ball from age 13 to 17 with the Indiana Prospects then spent a summer with the Houston (Texas) Banditos.

After Aberdeen, where Kyle Moore is the manager and Mark Hendrickson the pitching coach, the next links in the Orioles minor league chain are Delmarva (Low-A), Frederick,(High-A), Bowie (Double-A) and Norfolk (Triple-A). 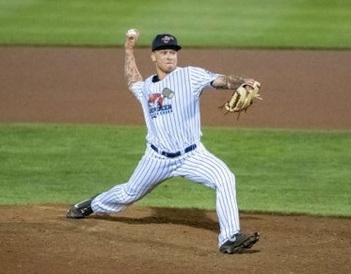 J.J. Montgomery, a graduate of Lawrence Central High School in Indianapolis who pitched at Northwest Florida State College and the University of Central Florida, is now with the Aberdeen (Md.) IronBirds in the Baltimore Orioles organization. (Aberdeen IronBirds Photo)

Consistent message and accountability of ballplayers.

Those are concepts Harrison “Harry” Nguyen had reinforced during his assistant baseball coaching days at Indianapolis Cathedral High School and it helps form his foundation as a coach and educator at Lawrence Central High School.

“Players — teenagers — they need that,” says Nguyen of the benchmarks. “They don’t necessarily see the value in it when they’re going through that. It can really be tough in the day-to-day. It can be uncomfortable. But it’s what students need. It’s what baseball players need.”

It’s what Nguyen gained from spending 15 seasons (2002-16) on the Cathedral staff led by Rich Andriole, who goes into the Indiana High School Baseball Coaches Association Hall of Fame Jan. 27 and is preparing for his first season as head coach at Guerin Catholic High School in 2018.

“Sometimes (athletes) need to be called out if they are not meeting certain standards,” says Nguyen, who speaks with Andriole on a weekly basis. “Rich is really good at that. We try to instill that in our kids here at Lawrence Central.

Nguyen began his coaching career on the staff of Anthony Lowborn at his high school alma mater, Arsenal Tech. Lowhorn went on to coach at Triton Central and sent Luke Stephenson on to college baseball. The right-hander pitched in 2016 and 2017 at Indiana University.

As a youngster, Nguyen played at Lowell Little League in Warren Township and was coaching there when umpire Rick Wagner suggested he look into a coaching opportunity at Cathedral. He met Andriole in the summer of 2001 and began coaching Fighting Irish freshmen and later got to work with standout players like Tommy Hunter, Dillon Peters and Ashe Russell.

“The X’s and 0s get us into baseball, but what keeps us in it is the people.”

Nguyen, an Indiana University Purdue University-Indianapolis graduate who got his start in education with schooling at Butler University taught at Indiana Connections Academy, Cathedral and Franklin Central High School before that, is in his second year teaching math in the LC freshman academy. J.R. Shelt is his administrator. Shelt was his junior varsity baseball coach at Arsenal Tech.

After leaving Cathedral, he was not sure where he would land then got contacted by then Lawerence Central athletic director Jeff Irwin, who shared the vision of the school district.

“It all came together really, really fast,” says Nguyen.

The 2017 season was Nguyen’s first as head baseball coach at Lawrence Central. The Bears went 12-16, beating Columbus North and Zionsville and suffering five one-run losses along the way. LC lost to eventual IHSAA Class 4A state champion Cathedral in the semifinals of the Warren Central Sectional.

“We lost some heartbreakers,” says Nguyen. “But we were pretty competitive.”

The junior varsity went 16-4 in 2017 and several players from that squad are looking to make noise at the varsity level in 2018.

“We bring back a lot of seniors,” says Nguyen. “We have had a lot of spirited workouts this off-season.”

The 2017 Bears participated in the I-65 Classic at Purdue University and McCutcheon (along with host McCutcheon, Lake Central and Zionsville). This year, a similar event is planned with Lawrence Central, Brebeuf Jesuit, Hobart and Perry Meridian, perhaps at Grand Park in Westfield.

LC is also waiting to see if it qualifies for the late-season Victory Field Classic, held at the site of the IHSAA State Finals and home of the Indianapolis Indians.

Lawrence Central is a member of the Metropolitan Interscholastic Conference (along with corporation partner Lawrence North plus Ben Davis, Carmel, Center Grove, Pike, North Central of Indianapolis and Warren Central).

The Bears were Marion County champions in 2015. LC last won a sectional title in 2004, the same year they took a state title.

Nguyen expects Bryan Peters and Greg White to return to his LC coaching staff in 2018. A year ago, the Bears had three teams — varsity, JV and freshmen. It’s not likely the numbers will be high enough for a freshmen team this spring.

“Though I have no scientific evidence, it seems that 13 is where the numbers are getting lost,” says Nguyen. “That’s when many kids go from 46/60 fields to full-size diamonds. In New Palestine, where my son (Ryan) plays in an 11-12 league, it’s 50/70.

“Travel teams start a lot younger these days. It’s harder to know where your home Little League is. There are so many boundaries and choices for parents. Travel ball has become an arms race.”

Besides travel organizations, talent is fed to the high school through Belzer Middle School, where Orion Ogg, is the coach, as well as Lawrence Township youth leagues — Skiles Test, Fall Creek, Oaklandon and Lawrence Lions.

Lawrence Central plays on-campus at Challis-Pauszek Field. In recent years, the facility has added bleachers stretching from dugout to dugout, put in a new press box and did work on the sod. Plans for the spring include new bullpens.

The LC high school program does quite a bit of fundraising to keep participation prices reasonable (it was $73 in 2017 and much of that is township-mandated transportation).

“We have not had kids who could not play baseball here because of cost,” says Nguyen.

LC graduate Jared Ruxer pitched at the University of Louisville and is now in the Kansas City Royals organization.

Besides Ryan, Harry and wife Heather have three other children. Morgan (17) and Tanner (16) are at Franklin Central High School and Hannah (14) is as Franklin Township Middle School-East. 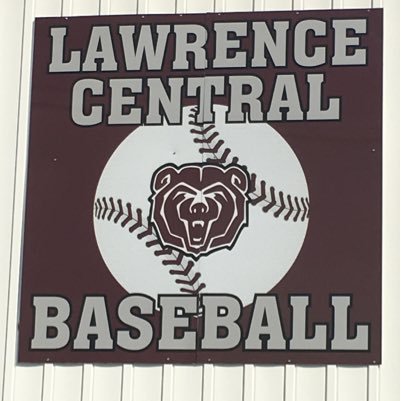 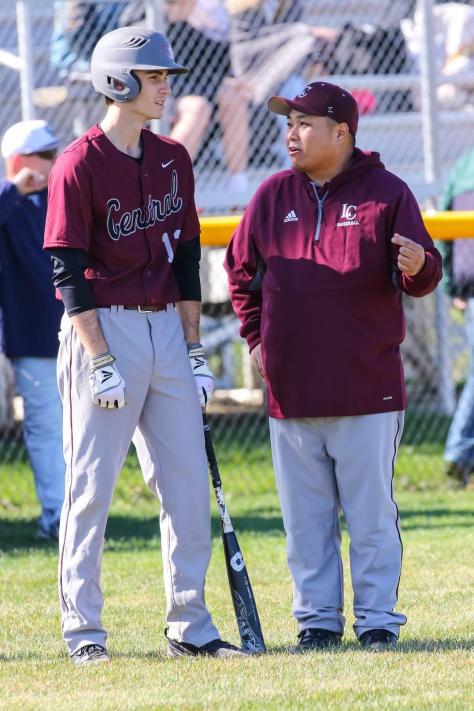