Leyva and Bair were Babe Ruth teammates in Anderson, Ind., at 13, 14 and 15. Rudy Mannie was the head coach. Leyva was mostly an outfielder and Bair a middle infielder.

In high school ball, Leyva represented the Phil Nikirk-coached Madison Heights Pirates while Bair was nearby with Terry Turner’s Anderson Indians. Both players graduated in 1995.

Leyva, Bair and Mannie were reunited when Bair became the head coach at Anderson Highland High School with Leyva and Mannie as assistants.

“It was cool to see that come full circle,” says Leyva of he and Bair getting to coach with a boyhood mentor in Mannie. “He was a big influence in both our lives.”

Madison Heights and Highland have since been consolidated into Anderson High.

After serving four seasons (2004-07) as a Scots junior varsity coach on the staff of Highland head coach Jason Stecher (current to Turner at Daleville (Ind.) High School and son of long-time Highland head coach Bob Stecher, who retired with more than 500 victories), Leyva was a varsity assistant for three years with Bair (2008-10).

So it was a natural when Bair took over as head baseball coach at Anderson University that he’d reach out to his friend.

“We really hit it off (at Highland) then he asked me to come with him to AU,” says Leyva. “We were getting the band back together.”

The 2020 Anderson season – though it was shortened to nine games because of the COVID-19 pandemic — was the third on Leyva with the Ravens.

His duties include working with outfielders, base running and assisting Bair with hitters. He also coaches first base when AU is at the plate.

Leyva has keys for his outfielders.

“The most important thing we can do is re-direct the ball back to the infield,” says Leyva. “We can shut down the other team’s offense.

“We focus on three goals at all times — keep the double play in order, limit the offense to one base at a time and with balls in the ground we’re 100 percent (no errors).”

The stolen base is a major part of Ravens baseball.

“We got progressively better as we implemented our system,” says Leyva. “We take pride in our base running.

“In a game where the defense has the ball we can take some control back on offense. We’re constantly studying what the game is giving us to see where we can find an advantage.”

Anderson, a member of the Heartland Collegiate Athletic Conference, swiped 105 bases in 45 games in 2018. Once Leyva and Bair had their system in place, the team lost to one of the more prolific teams in NCAA Division III, pilfering 109 in 37 games in 2019 and heisting 42 in nine contests in 2020.

“As a rule of thumb, the entire team has the green light,” says Leyva. “We live on those opportunities we’re creating.”

Bair runs the overall hitting system, including small group work in practice. Leyva spends time on the offensive side the outfielders.

“Our staff at AU is affluent in the game of baseball,” says Leyva of a group that also features Brandon Schnepp, John Becker, Jeff Freeman, Zach Barnes and Nate McKeon. “We dip our toes into each other’s pools at times.

“We have a rather large staff for a college team. That’s a testament to Bair and local guys who love the game and know what’s going on. Opinions and input is always welcome.”

Prior to joining the Ravens, Leyva spent seven seasons as an an assistant at Pendleton (Ind.) Heights High School (2011-17) under two Arabians head coaches — two years with Bill Stoudt and five with Travis Keesling. The PHHS program is now headed by Matt Vosburgh.

“That was awesome, spending time in the dugout with a Hall of Famer,” says Leyva of his experience with Indiana High school Baseball Coaches Association enshrinee Stoudt.

Leyva says Keesling’s ability to leverage the abilities of his coaching staff is one of his strengths.

“He had a football mentality with position coaches,” says Leyva. “He let the infield guy be the infield guy (and so on). He took over that managerial role of figuring out how to best put those pieces together.

“You see staffs being put together that way all over the country. He was early to that concept.”

Leyva fondly looks back on his days playing at Madison Heights for Nikirk (who is now secondary school principal at Heritage Christian School in Indianapolis).

“He was really big on personal responsibility and accountability and was really fair,” says Leyva. “He gave the guys opportunities.

“Those are qualities I’ve carried forward in my coaching career.”

Leyva has also coached travel baseball. He was co-founder and a head coach of the Indiana Magic in 2011-12 and was an assistant to Ryan Bunnell with Indiana Bulls 16U in 2013, Mike Farrell with the Indiana Outlaws (an organization started by Jay Hundley which is now part of Evoshield Canes Midwest) in 2014 and Mike Hitt with the Indiana Blue Jays 2015-17.

The Magic was comprised of players from Madison and surrounding counties and won 60 games in two summers.

Farrell, who played at Indiana State University, is a veteran instructor and a scouting supervisor for the Kansas City Royals.

“That may have been as much fun as I’ve had in baseball.” says Leyva of his time coaching the Blue Jays. “We were a single (18U) team. The roster was all guys committed to playing college baseball at a high level and there were no egos.

“We just had a blast playing really good baseball. We were like 60-5 in three years.”

Thomas Hall, Leyva’s nephew, was on each of those travel teams. The Pendleton Heights graduate was selected for the 2015 IHSBCA North/South All-Star Series in Terre Haute and played at Heartland Community College in Normal, Ill.

After graduating from Madison Heights, Leyva attended DePauw University in Greencastle, Ind., for two years then transferred to Indiana University in Bloomington. He majored in Computer Information Systems and is a 2000 graduate of IU’s Kelley School of Business and has worked since 2008 for IBM as a System Storage Enterprise Client Technical Specialist.

Carlos and Julie Leyva have three children — fourth grader Mia (10), second grader Izzy (8) and kindergartener Cruz (7). Julie is on the front lines of the pandemic as a nurse practitioner. 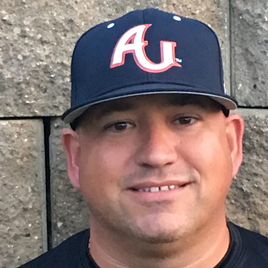 Carlos Leyva has been an assistant baseball coach at Anderson (Ind.) University since the 2018 season. (Anderson University Photo)