But playing ability is not the first priority for the man who enters his eighth season as senior team manager in 2018 after serving as an assistant and with Post 6’s junior squad.

“Team chemistry is more important than talent,” says Andrews. “It’s something we work really hard at.

“We’re finding out what the dynamics of the team are going to be. I go to a high school baseball game in the spring almost every night. I’m watching the players and also watching the parents.

“By the time (open) tryouts come around (in August) we almost know who we want (for the following year).”

Through his observations and conversations, Andrews will invite desired players to the tryout. He wants kids with a high baseball I.Q.

But — again — there’s more than that.

“A big basis of what we do is try to find high character kids,” says Andrews. “It’s a long, hot summer so we want to have good kids.”

Andrews normally goes through the regular season with about 15 or 16 players and adds a few worthy juniors at the end of the summer.

Post 6 plays around 35 games before the regional. This year, the regular season opens June 4 and closes July 10.

The Kokomo Summer Classic at Highland Park Stadium is slated for June 15-17.

Andrews estimates that 70 percent of Post 6’s games are at Highland Park.

“Everybody loves to play on that field,” says Andrews. “The parks department does a great job of keeping it up.”

Then there’s the dimesions.

“We have a big home field advantage,” says Andrews, eluding to the short distance down the right field line with a high fence. “We know we’ve just got to play. We don’t worry about hitting it over that fence.”

Meanwhile, left-handed batters on opposing teams are practically drooling when they see that short porch.

The Indiana American Legion State Finals rotates from north to south each year with teams bidding for the rights to host.

Kokomo hosted in 2016 at Kokomo Municipal Stadium and will do so again this year at Highland Park. The eight-team event (seven regional champions plus the host) is scheduled for July 27-31 (the Kokomo Regional is July 20-22).

While the deadline for entries is still open, Andrews expects there to be up to 32 senior teams in Indiana this year and maybe a dozen or so junior (17U) squads.

Post 6 will take its senior players in 2018 from the following high schools: Kokomo, Northwestern, Western, Taylor, and Logansport.

Junior players come from those those schools plus Oak Hill, Sheridan and Tri-Central.

In some years, the Sixers had players from Eastern, Lewis Cass and Peru.

American Legion Baseball has been a tradition in Indiana since 1926. Legion ball thrives in many corners of the state.

While many Legion rules mimic those of Major League Baseball, the national organization voted not to adopt mound visit restrictions now used by MLB.

Andrews began his coaching career when son Reid was 5 and playing T-ball at Russiaville Little League. Andrews, with the help of Dan Weaver, followed his son up the line, including four years of travel baseball — three with the Bullpen Aces and one with the Central Indiana Kings — and summers with Kokomo Post 6.

Besides bench coach Weaver, Andrews is helped with his Sixers by third base coach Will Harris and first base coach Dave Takacs.

Reid Andrews, a graduate of Western High School and Purdue University, is now general at Roundtripper Sports Academy in Westfield and an assistant to head baseball coach Chris Estep at University High School in Carmel.

The Andrews family is full of coaches. Don’s wife Deb Andrews is a boys and girls swimming assistant coach at Western High.

Daughter Rae Andrews, an Indiana University graduate, is a swim coach and lifeguard at the YMCA of Greater Rochester (N.Y.).

Don Andrews, a 1977 Northwestern High School graduate, played a few years of prep baseball then discovered a talent for running and turned to track and field and cross country.

He was on the track team at Purdue when he was struck by a vehicle during a November training run. A few years later, he was on the cross country and track teams at Taylor University in Upland, Ind., and coached the sports during and after college.

Don Andrews is manager of the Kokomo (Ind.) American Legion Post 6 baseball team. The Sixers is scheduled to open the 2018 season June 4. Post 6 will also host regionals and state finals for both junior and senior divisions.

Not every hop is true.

Not every line drive off your bat finds grass before it finds an opponent’s glove.

Not letting those moments keep you down is key to long-term success.

These are the kinds of things Kokomo High School head baseball coach Sean Swan is teaching his Wildkats.

Swan was a Kokomo assistant for four seasons before taking over leadership of the program for the 2015 season. That year, he had six freshmen in the starting lineup. The young Kats had the talent to compete, but were not always equipped for baseball’s inevitable rough patches.

“We prepare these young men to go out and do great things whether it’s in baseball or just life,” says Swan. “We use the game to teach those lessons. We talk about failure a lot. Failure is something you have to work through and how you can learn from it.

“We’ve made great strides in dealing with failure and adversity. We’re not perfect yet and I tell the kids we’re not going to be. Baseball is like that. You’re going to have games where things don’t go your way and you don’t play your best.”

Swan talks to his players about being mental toughness and playing a hard-nosed brand of baseball.

That approach got Kokomo off to a 14-0 start in 2017 even though it found itself down by 13 runs in one of those victories. The Kats fell behind 14-1 in the second game of a North Central Conference doubleheader against Lafayette Harrison only to win 21-18 with the decisive run coming at the end of the game.

“I was pleased we stuck with the process and kept fighting,” says Swan. “I want our guys to be very even-keeled. We talk about playing with emotion but not emotionally. We tell them to focus on playing the game the right way and not so much on who they’re playing against.”

When Kokomo took its first loss of the season — 12-1 to Zionsville — the Kats responded with a 2-1 NCC tournament quarterfinal win against Harrison in eight innings.

The ’17 Kats have 43 players on three squads — varsity and two junior varsity teams (Blue and Red).

Weir is the father of T.J. Weir, a Kokomo graduate and a pitcher in the San Diego Padres organization.

Phares, a member of the Indiana High School Baseball Coaches Association and Howard County Sports halls of fame who won an IHSAA Class 2A state championship at Taylor in 2000, serves as an extra set of eyes. He scouts the Kats and gives Swan an honest evaluation on areas that need improvement.

“Sometimes as a head coach, you have blinders and get focused on what you’re trying to accomplish and you miss some things,” says Swan of Phares. “He challenges me in some areas.

“The guys on my staff are great baseball men, but great men in general. I want quality individuals that are high-character people.”

Kokomo once played at historic Highland Park Stadium and practice and play on the turf at Kokomo Municipal Stadium, home to the Kokomo Jackrabbits of the summer collegiate Prospect League.

“We are blessed,” says Swan. “It’s one of the best fields in the state.”

With its fast surface, playing not the carpet has been an adjustment. Even softly-struck balls sometimes get through the infield and outfielders are asked to play deeper in an attempt to keep balls out of the gaps.

At all games — but especially at Municipal — the Kats look to put pressure on the defense by putting the ball in play.

“We try to be aggressive and get pitches we can drive,” says Swan. “Early in counts we want them to be sitting on fastballs. After the count gets deeper or they fall behind in the count, their (strike) zone expands a little bit. They shorten up their swing and then it’s about putting balls in play.”

Swan looks at the new pitch count rule and says it has more of an effect at the JV level than the varsity.

“We build up (varsity) players so they can throw 80 to 100 pitches and we’re comfortable with that,” says Swan. With varsity depth, starters generally pitch just once a week. “But the rule makes us be forward-thinking with our younger guys. We have two junior varsity teams and they’re not efficient with their pitches.

“Bigger schools it won’t effect quite as much, but I really see it effect JV programs, especially at small schools. They just don’t have that depth. They don’t have the arms to eat up innings.”

Swan, a Muncie Central graduate, began his coaching career as an assistant at his alma mater while still in college.

His first head coaching job came at Lapel. The Bulldogs won just one game the year before he arrived and a few years later won a sectional.

Swan then served five years as assistant to Ryan Bunnell at Westfield and considers him a mentor.

“I learned a great deal from him,” says Swan. “He’s a great baseball guy.

“I tend to be more emotional and he’s very steady. He’s great with X’s and O’s and I watched how he drew up a practice plan.” 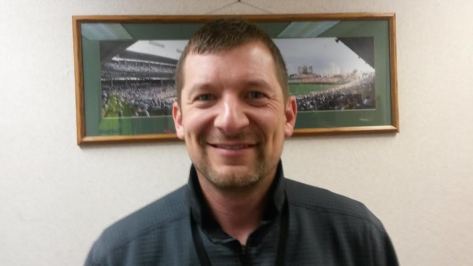 Sean Swan is in his third season as head baseball coach at Kokomo High School. He was an assistant for the Wildkats for four seasons before that. He is also an assistant principal at KHS.