“At my age, I look back at all the things that he taught me that I didn’t realize he was teaching me,” says Tony Meyer. “It was the way he dealt with players and parents. He could take a player and make him feel like a million bucks or take him down. He never had to raise his voice.”

The elder Meyer also stressed the importance of education.

“He was a very calming influence in the dugout, on the field and in recruiting,” says Tony Meyer. “If I could be half of what he was as a coach, I’d be pretty good.”

Brother Pat Meyer was a good baseball player, he went into sales and now lives in the Chicago suburbs. Sister Anne was a strong all-around athlete and is now in banking in Florida.

Pete Meyer was head baseball coach and athletic director at Florida Southern College before moving back to Greencastle.

Tony Meyer graduated from Greencastle in 1988 and Wabash College in 1993. He played baseball for the Little Giants and head coach Scott Boone for four seasons (1989-92) and football for head coach Greg Carlson for two (1990 and 1991).

After graduation, Meyer went to Hanover College to coach football and baseball. He was on the baseball staff of American Baseball Coaches Association Hall of Famer Dick Naylor.

Meyer remembers Naylor for his persistence in finding players.

“He put me on the road to recruit,” says Meyer. “He showed me what to look for.”

Meyer spent 1994 conducting USA Baseball camps in Texas, Missouri and Oklahoma and was head scout for the U.S. team for the Pan-American Games.

He then went to DePauw and coached on the diamond with his father.

Terry Gobert, the long-time Jasper High School head coach and IHSBCA Hall of Famer, is a Greencastle graduate and was a graduate assistant to Ed Meyer in 1984 and 1985 along with basketball coach Mike Steele. He was a teammate of Mike Meyer and coached Pete and Pat in Babe Ruth baseball.

After his stint with the Tigers, Meyer coached various teams, including the Waukegan (Ill.) Waves and a summer collegiate team in Indianapolis.

When Meyer began a family, he went into sales but still volunteered in Babe Ruth and youth league baseball and gave lessons.

Then a unique opportunity happened at Cloverdale. The Clovers had an opening for a head football coach and head baseball coach and athletic director J.J. Wade hired Meyer to take both posts which he held in 2015-16 and 2016-17. He had volunteered with the baseball program during the 2014 season.

“It was a learning experience,” says Meyer of his time at Cloverdale, where he got guidance from former Clovers head football coach Mike Parks. “He showed me how he deals with kids, their lives and education.”

Many of his players went on to college.

He coached 13U then 14U travel teams for Bill Sampen’s Indiana Expos and then a 15U squad for Chris Estep’s Indiana Mustangs.

When IHSBCA Hall of Famer Rich Andriole resigned as head coach at Guerin Catholic, Meyer was encouraged to apply. He was hired by Ryan Davis, the Golden Eagles athletic director and a former assistant to Andriole at Indianapolis Cathedral High School.

“It’s been great so far,” says Meyer, who has been getting about 25 players at IHSAA Limited Contact sessions and expects up to 36 when the 2020 season rolls around. “This is one of the top baseball jobs in the state. There’s a whole lot to offer up there.

“I’ve got some good players. I think we’re going to be very competitive for 3A. Hopefully we can continue the upward trend Rich (Andriole) started two years ago.”

Meyer has named Jalen Cushenberry and John Magers, Eric Wott and Kevin Paulin as Guerin assistants and has two openings yet to fill.

What about the daily drive between Greencastle and Noblesville?

“It’s only a 53-minute commute,” says Meyer. “In sales, I drove to Carmel every day for five years.”

Guerin Catholic (enrollment around 725) is a member of the Circle City Conference (with Bishop Chatard, Brebeuf Jesuit, Covenant Christian, Heritage Christian and Roncalli).

The Golden Eagles are part of an IHSAA Class 3A sectional grouping with Delta, Hamilton Heights, Jay County, New Castle and Yorktown. Guerin has not yet won a sectional crown. Tony Meyer is the head baseball coach at Guerin Catholic High School in Noblesville, Ind. The 2020 season will be his first in charge of the Golden Eagles.

But the 1989 graduate of the school wants his Blackhawks to know it’s not his team.

“I want to empower the kids,” says Denbo. “I want them to feel like it’s their team.

Springs Valley has 13 players in the program — four seniors, four juniors, one sophomore and four freshmen.

“We have a pretty solid core,” says Denbo, who looks for lefty senior pitcher/first baseman/center fielder Christian Tucker to be the team leader. “They’ll all play at some point.

“We’re going to play a lot of freshmen. I’m looking forward to playing from the youngest to the oldest. When we come together and we’re going to be really hard to beat. I’m really excited for them.”

“He also had a very dry sense of humor. He had a way of keeping the practices light. We all enjoyed playing for him.”

Pritchett did not believe in fancy plays and neither does Denbo.

“We won several games by keeping it simple,” says Denbo. “I try to do that as well.”

Denbo was a Springs Valley assistant coach the past two years under brother-in-law Bob Greger.

“They’ve bought into a new way of doing things,” says Denbo of the current squad. “I’m looking forward to watching them.”

Denbo, who is assisted by Henry Cruz, Seth Dickey and Broc Warner, has incorporated a good deal of drill work into Blackhawk practices.

“We get a lot of reps in the cage,” says Denbo. “We encourage good habits and create some muscle memory.

“The best way to do it is to have a drill that reinforces the right way to do something. They need to feel it.”

Denbo has noticed that his players are developing the ability to find their own flaws and correct them.

“I don’t have to say anything,” says Denbo. “They can self-correct. It’s not because I’m telling them to.”

Conference opponents play each other twice, but only the first meeting counts in the standings.

The Blackhawks are part of an IHSAA Class 1A sectional grouping with Cannelton, Northeast Dubois, Tecumseh and Wood Memorial. Northeast Dubois hosted the sectional in 2017. It moved to Cannelton in 2018. It is to be at Tecumseh in 2019. Springs Valley has won 17 sectional championships — the last in 2004.

SV home games are played on-campus on a field that was overhauled two years ago.

“We bulldozed the entire infield under and completely re-did it,” says Denbo. “We’re in really good shape.”

The field has lights, which comes in handy for twilight doubleheaders.

A junior high team of about 18 players also uses the field in the spring. Made up mostly of seventh and eighth graders with a few sixth graders, they play about as many games as the high school varsity.

After graduating in 1993, Denbo went into journalism and later switched to the hospitality business. He is internal communications manager for French Lick Resort. 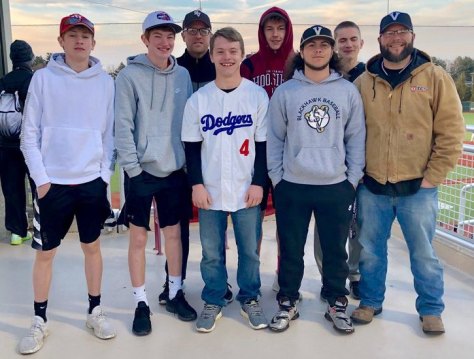 Members of the 2019 Springs Valley High School baseball team attend a game at Indiana University in Bloomington. Rob Denbo (third from left) is the head coach of the Blackhawks.