These are the main goals of the baseball program at Fort Wayne (Ind.) Northrop High School, where alum Matt Brumbaugh is entering his ninth season as head coach in 2020.

“We will play small ball and try to hit the ball gap-to-gap,” says Brumbaugh. “We run the bases. We hit-and-run. At the higher levels you hardly see it at all. We probably use it more than most teams.”

Brumbaugh will take a hitter that may be struggling at the plate and ask them to hit-and-run.

“They can go up there thinking about nothing but putting the bat on the ball,” says Brumbaugh.

A 1985 Northrop graduate who played for Indiana High School Baseball Coaches Association Hall of Famer Chris Stavreti, Brumbaugh was the starting second baseman and lead-off hitter on the Bruins’ 1983 state championship team. He was first-team all-Summit Athletic Conference, first-team all-area and second-team all-state in 1984. He is among Northrop’s leaders in career (104) and single-season (46 in 1984) for base on balls.

“It was a great opportunity for me to play for a coach who really stressed fundamentals,” says Brumbaugh of Stavreti. “He was a fiery guy who wanted to get the best out of every player he coached.”

Brumbaugh appreciates that Stavreti allowed him to immerse himself in every aspect of coaching as a Bruins assistant.

“He helped me to develop my overall skills as a coach,” says Brumbaugh, who sports a career record is 160-79 with four SAC titles.

In 2016, Northrop earned a sectional championship and Brumbaugh was IHSBCA Regional Coach of the Year.

Northrop has played on its current field since 1982. Since 1999, it’s been known as Stavreti Field. A project was recently completed on Stravreti Clubhouse, a structure with concession stand, rest rooms and coaches office on the first floor and a 37-stall locker room and press box on the second level.=

The field does not have lights. The diamond is sometimes in the flight path of planes flying in or out of nearby Fort Wayne International Airport.

One of Brumbaugh’s Northrop teammates was Eric Wedge, who went on to play and manage in the majors and is now head coach at Wichita State University.

“When he was a player, he was such a hard-nosed, goal-driven person,” says  Brumbaugh. “He was a freshmen playing at the varsity level and had goals and ambitions beyond high school baseball.

“I’m really happy for him he’s back in the game at Wichita State, where he won a College World Series. It’s going to be a challenge. But he’s the kind of guy who can rise to challenge. You could see that coming from a young age.”

Brumbaugh and Wedge has stayed in-contact over the years and he has been known to visit Northrop players when he’s in Fort Wayne.

A 1990 graduate of Huntington (Ind.) College, Brumbaugh was a first-team all-Mid-Central Conference shortstop 1987-89 and first-team all-NAIA district shortstop in 1988 and 1989, playing for IHSBCA Hall of Famer Mike Frame.

Brumbaugh was a Northrop assistant coach 1990-97. The 1997 Bruins were a Final Four team in the final year of single-class baseball in Indiana.

“He’s one of the best teachers of the game. He’s a stickler for details,” says Brumbaugh of Hershberger, who started the baseball program at Ivy Tech Community College in Fort Wayne. “He’s a master of all aspects of the game. He’s a tremendous coach. You can’t learn enough from him.

“He’s intense, but he gets his point across.”

It’s a big staff, especially considering that Northrop usually has 25 to 30 players for its two squads.

“Only two are paid and the rest are volunteers,” says Brumbaugh. “They love the game and they love the program.”

In recent years, Northrop has sent players on to college programs. Among them are 2017 Gatorade Indiana Baseball Player of the Year Garrett Schoenle to the University of Cincinnati. Ben Yoss went to Rose-Hulman Institute, Anthony Miller to the University of Saint Francis and Mike Snyder, Jack Hayden and Braden Klinedinst to Indiana Tech.

Most are home-and-home series in the same week or doubleheaders with the teams trading last at-bats. One of the Northrop-Snider games is slated as part of the Parkview Sports Medicine Series at Parkview Field on April 21.

The Bruins are part of an IHSAA Class 4A sectional grouping with Carroll, DeKalb, East Noble and Snider. Northrop has won 15 sectional titles — the last in 2016. Besides being state champions in 1983, the Bruins were state runners-up in 1981.

Over the years, St. Joe Little League and Wallen Baseball, which serve players up to age 14, have been a feeder system for Northrop though more and more players are going the travel baseball route.

Matt and Karen Brumbaugh have been married for 22 years and have two daughters at Indiana University – Jensen (20) and Kendall (18). 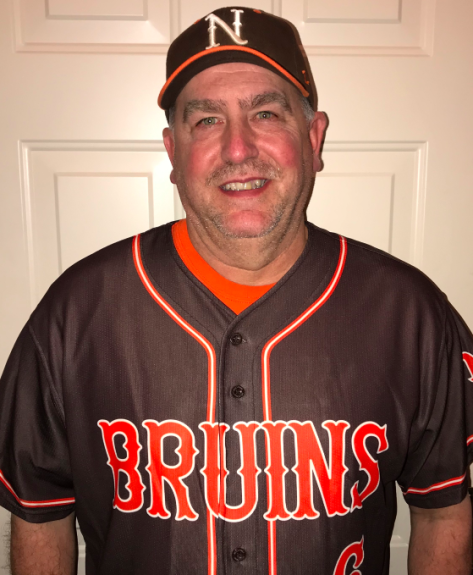