Dimitri Napoleon has found a way to combine two passions — broadcasting and baseball — in college.

A 2018 graduate of Penn High School in Mishawaka, Ind., Napoleon is a sophomore following a Digital Audio Production concentration at Ball State University in Muncie, Ind.

“I enjoy working with audio equipment and editing so I found the perfect major for my passion,” says Napoleon. “It allows me to get hands on experience with the technical and practical aspects of radio as well as gaining experience in public speaking.”

“I really enjoy talking about MLB transactions like trades etc.,” says Napoleon. “Most of the time my co-hosts change around, so the constant on the show is me.

“In college, it means understanding how scholarships work and eligibility and in the pros it involves being competent on salaries, contracts, forming a major league roster, transactions and more.”

With the COVID-19 pandemic causing the BSU campus to be shut down, Napoleon and his partners went about moving “Diamonds and Dingers” to a podcast.
“We’re working on getting approval from platforms,” says Napoleon. “We will record and upload the episodes on Anchor a (podcasting) app, and it will be automatically be uploaded to our Spotify.”

Napoleon says having a game plan is a key to a well-run podcast or radio show.

“When I’m on air I make sure I have a detailed script with not only details about the topics discussed, but also a time structure for ending a segment so the show ends in exactly one hour,” says Napoleon. “It also helps to be confident and have fun. The more fun you have on air or recording the more entertaining of a finished product you get.

With the college baseball season being called off and the NCAA and NAIA granting another year of eligibility to players, Napoleon can visualize an interesting diamond future at multiple levels.

“I could potentially see players either returning back to their original teams if they still have a passion for the game,” says Napoleon. “They could also use the extra time to explore their options via transferring.

“It certainly wouldn’t hurt getting an early start on private workouts. Seniors would stand a lot to gain from it if they are highly-regarded prospects. (It’s) basically a do-over from last season.

“High school seniors do have it rough since they rely on senior year to develop interest from coaches around the country. The MLB will have some scheduling concerns. Do they make up the games they miss? How do they plan on having a playoff format? It would certainly hurt the organization since it could occur during the NFL, NBA, and college basketball regular seasons.”

Then there’s the question of minor league roster manipulation.

“Service time would certainly play a big part in the future for top pipeline prospects,” says Napoleon. “Payment will also present issues during the extended offseason as well.

“Of course the draft is important for those who want to join MLB organizations, however I see no problem holding a potential live stream of the picks. The process could work the same, there would just be no physical location to host the event.”

The Major League Baseball First-Year Player Draft was going to be moved to June 10-12 during the College World Series in 2020, but that event was canceled and now the timing of the draft — if it happens at all — is up in the air.

Napoleon likes to play the game as well as talk about it. He is also a left-handed pitcher used in long relief and a a spot starter for the Ball State Baseball Club.

“It’s extremely competitive baseball without the NCAA affiliation,” says Napoleon. “That means we raise money on our own and work with (recreation) department.

“Some of the top club teams in the country act as feeders to the main team.”

Ball State is in the Great Lakes South Conference in the National College Baseball Association with defending club national champion Illinois, Illinois State, Indiana, Notre Dame and Purdue. Games are played in the fall and spring.

“It’s a lot of fun and those guys are legitimately talented,” says Napoleon. He did not play baseball in high school, but pitched multiple bullpens a week. 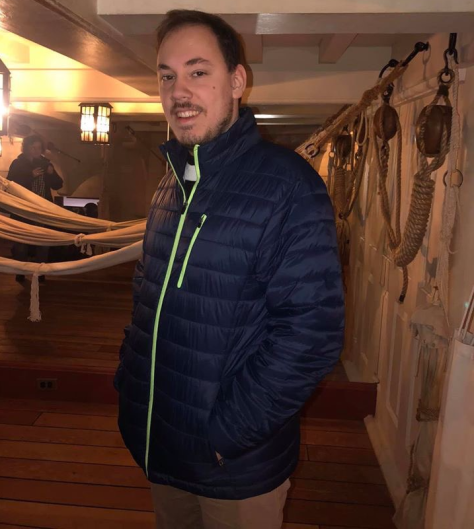 Dimitri Napoleon, a graduate of Penn High School in Mishawaka, Ind., and a sophomore at Ball State University in Muncie, Ind., is a host for a baseball show/podcast called “Diamonds and Dingers.” He also pitches for the Ball State Baseball Club.