Mike Harmon has taught his players at Bishop Chatard High School in Indianapolis to pay attention to those during his 20 seasons as head baseball coach for the Trojans.

“Those 3-2 games come down to overthrows or not taking the extra base,” says Harmon. “I’m also a big advocate of multi-sport athletes.”

Chatard has won 13 state titles in football and one in boys basketball. The Trojans have also claimed 11 sectionals, seven regionals, one semistate and one state finalist finish (1973) with five sectionals and two regionals on Harmon’s watch as coach.

During the IHSAA fall Limited Contact Period, Harmon led nine or 10 athletes not involved in a fall sport (many Chatard baseball players are in football or tennis) in player development.

The Trojans will be work in the weight room until the next LCP (Dec. 9-Feb. 8).

Chatard was the first Indiana high school to have artificial baseball turf on-campus. Dave Alexander Field is heading into its eighth spring as a turf field.

“With turf, we will stay outside as long as we can,” says Harmon.

Chatard (enrollment around 720) is a member of the Circle City Conference (with Brebeuf Jesuit, Covenant Christian, Guerin Catholic, Heritage Christian and Roncalli).

Chatard last won the Indianapolis city tournament in 2011 and lost in the semifinals in 2019. The 14-team event is also seeded. In 2020, the city and county championships are slated for May 14 at Victory Field in downtown Indianapolis.

The Trojans are part of an IHSAA Class 3A sectional grouping with Beech Grove, Herron, Indianapolis Manual and Indianapolis Shortridge. Chatard’s most-recent sectional crown came in 2007.

Current Chatard senior Patrick Mastrian has committed to the University of Michigan. Others are expected to go on to college diamonds.

“I coached in grad school at Butler for three years so I feel like I know (what colleges are looking for),” says Harmon. “We talk to our players as early as sophomore year.”’

A meeting is set up with parents and all involved are encouraged to do their homework on prospective schools.

Harmon says he will tell it like it is when it comes to dealing with college recruiters.

“I try to be honest with them,” says Harmon. “I tell them come out and watch them play.

“You don’t want to feed them a line of bull and it comes and haunts and you.”

Harmon’s coaching staff includes Joe Milharcic and Ken Menser with the varsity, Brian Harrison with the junior varsity and Coley Gaynor and Dave Whittemore with the freshmen. Cathedral graduate Milharcic is a Chatard teacher and has been with the program for 16 years. Chatard alum Whittemore also teaches at the school. Menser played at Butler, Gaynor at Ritter High School and Harrison is a Ben Davis High School graduate.

A 1984 Chatard graduate, Harmon is a former football head coach and baseball assistant at Brebeuf Jesuit in Indianapolis. He was on the football staff at Chatard for a decade and still helps the team on game nights. He is also in his 15th year as an assistant athletic director.

Harmon played baseball at Chatard for Tony Primavera, who was good at making coaching points.

“He really taught the game — things that didn’t show up in the box score like lead-off walks and two-out hits,” says Harmon. “He really talked the game with us.

“I appreciated him more after I played for him when I did play for him.”

“(Gallo) was very family-oriented,” says Harmon. “He was always asking how things are going outside of baseball. He was a people person.”

Now a veteran coach himself, Harmon enjoys talking the game and knocking around ideas with guys like Rich Andriole, Phil Webster, John Wirtz, Dave Gandolph and John Zangrilli. The first four are in the Indiana High School Baseball Coaches Association Hall of Fame.

Mike is married to Roncalli graduate Karen Harmon. The Harmons have three children. Emma Harmon (20) is an Indiana University sophomore. Elaina Harmon (16) is a Roncalli junior. Andrew Harmon is in sixth grade. He is a ballboy for Chatard in football and batboy in baseball. 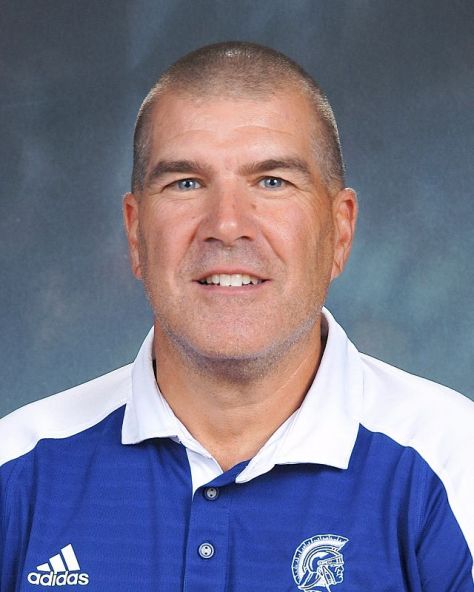 Mike Harmon has been the head baseball coach at Bishop Chatard High School in Indianapolis for 20 seasons. (Bishop Chatard Photo)