“Today, they talk about being a player’s coach,” says Hartman. “That’s important. You need vested in these kids not only on the field but off the field.

“You can be strict and have discipline and still be there from a personal standpoint. When they see that you have their best interests (at heart), that’s how you get the most out of them.”

As a Mavericks player and then an assistant, Hartman learned from Indiana High School Baseball Coaches Association Hall of Famer Jake Burton.

“I learned many things, like how to build the program from the bottom up, player personnel, coaching strategy and (fundraising),” says Hartman. “It was a little bit of everything.”

Hartman, who holds a Law and Society degree from Purdue University and is a patrolman for the Lafayette Police Department, appreciates the new IHSAA rules that allow periods of limited contact. During these periods, an unlimited number of players can receive instruction two days a week for two hours at a time.

“I like the change,” says Hartman. “I need as much time as I can with these kids to get ready for that opener in March.”

“A lot is accomplished in those two hours. We’re getting a lot of team stuff done now that wouldn’t be done before March (under the old rules).”

The Red Devils have been practicing in the Cumberland Elementary School gym. Coaches man up to six stations for drill work. After that, everything is cleared out for the team to go over defensive coverages.

Bryan Dispennett is the head junior varsity coach and Buck Nelson is the JV assistant. Dispennett has coached all around Tippecanoe County, including at Central Catholic and Lafayette Jeff. Nelson is a former McCutcheon assistant.

Senior catcher Owen Walbaum has committed to play at Purdue.

Upon taking the job, Hartman established West Lafayette travel teams for 9U, 11U, 12U and 14U. They will play in five or six tournaments during the summer — some at the Noblesville (Ind.) Field of Dreams.

“To be competitive and improve, you have to be in those travel leagues,” says Hartman.

These players plus some from West Lafayette Little League serve as the feeder system for the high school.

Hartman has gotten approval to have padding installed in front of both dugouts. A local turf group is improving the surface. An irrigation system is on the way.

Each conference team plays each other twice in a home-and-home series during the same week.

The Red Devils are part of an IHSAA Class 3A sectional grouping with Benton Central, Maconaquah, Northwestern, Peru and Western. West Lafayette has won nine sectional titles — the last in 2011.

Justin and wife Megan have been married for 10 years. The couple has two children — daughter Chesney (9) and son Koen (8). 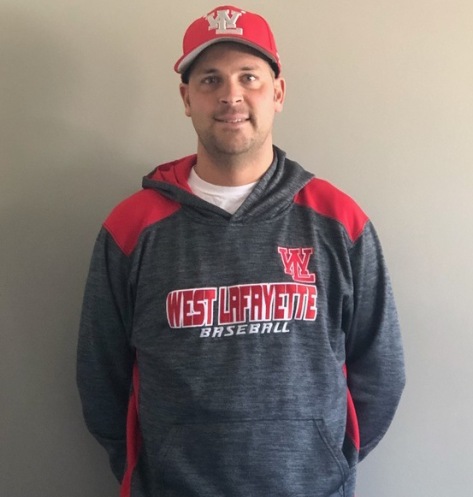