Dillion Weldy has faced physical challenges throughout his young life.

At two weeks old, he went to Riley Hospital of Children in Indianapolis to repair a heart defect (coarctation of the aorta).

He also has a heart murmur and an abnormally-shaped bicuspid aortic valve.

These conditions restricted his activity, but he was able to play some T-ball and coach pitch baseball in Wakarusa, Ind.

At 7, second grader Dillion found out he had cancer in his lower back.

He collapsed in the hallway at school with back pain in the fall of 2008. That was two days after mother Cindy married Tom Lamb. It took two months to figure out Dillion’s issue. At first it was believed the boy had a kidney stone so he went to see a urologist.

Then came total body bone scans, X-rays and CAT scans. He was scheduled for an MRI when a doctor who had been reviewing his tests called and advised the family to take Dillion to Riley immediately. He was airlifted from Plymouth to Indianapolis.

That was Oct. 1, 2008. Three days later, he was diagnosed and received his first treatment for Non-Hodgkin’s Lymphoma.

A golf ball-sized tumor was found on Dillion’s spine. It was around his spinal cord, spine and nerve endings. One vertebrae was fractured and another one was removed.

All of the tumor was successfully removed with surgery. After two years of treatment, he was declared to be in remission in October 2010.

Because of his condition, he was not allowed him to engage in strenuous activities which limited what he could do around the farm and kept him out of sports for fear of causing more damage.

“Once cancer hit, doctors told me I couldn’t play any more,” says Dillion. “Throughout elementary and middle school, I didn’t do any sports.

“My freshman year, my mom told me, ‘you need to get more involved in activities.’ At first, I said, ‘I might not like this.’ It turns out, I really did.”

What Dillion did was become a boys basketball manager at NorthWood High School in Nappanee.

“When basketball season was all over, it was ‘what am I going to do next?,’” says Dillion. “Let’s do baseball because I’m pretty familiar with baseball.”

“He treated me like I was part of the team, which I really loved,” says Dillion.

Weldy did his part for a basketball program led by Aaron Wolfe.

A.J. Risedorph, a basketball assistant, took over NorthWood baseball for 2018-19 and Dillion continued to be a key part of the squad.

“He’s bought into our motto of being relentless and the next pitch mentality,” says Risedorph. “He shows up everyday and puts his work in.

“He’s a constant reminder of how precious life is considering his background.”

Risedorph reached out to district representative Ryan Wolfe (Plymouth) who pitched the idea of Weldy managing the all-stars to executive director Brian Abbott and the IHSBCA leadership.

“I wanted to give Dillion that opportunity for everything he’s done for us,” says Risedorph. “It’s a selfless job and you don’t get many thank you’s.”

Matt Dutkowski, who will represent NorthWood and the North as an all-star first baseman and also played basketball at NWHS, noticed Dillion’s contribution to both sports.

“Anything you need him to to do, he’s going to do it,” says Dutkowski. “For eight seasons, he was was always the first one out to practice with the bases or basketballs. He was always putting something away or getting something if it was needed during practice.”

Dillion monitored the clock at basketball workouts and got to know the plan as well — if not better — than Coach Wolfe. He kept the scorebook during baseball games.

“He was always ready,” says Dutkowski, who is headed to Taylor University to study and play baseball.

Weldy is appreciative of being included at the all-star series.

“I applaud (the IHSBCA) for letting me do it,” says Dillion. “I’m super-excited to find out what I’m going to be doing.”

His managing days will not be over after Madison. Offered a role by multiple schools, Dillion will attend Indiana University East in Richmond and be a men’s basketball manager. Family friend Tyler Rigby is an assistant coach for the Red Wolves. Weldy will receive a partial scholarship and plans to major in Marketing with minor in Sports Management.

He says can see himself becoming an athletic director like NorthWood’s Norm Sellers, who until the family moved recently to a Weldy farm north of Wakarusa and Nappanee lived across the street.

“You can go the education route or the business route,” says Dillion. “(Norm) told me it takes a lot of dedication. I can always talk to him and he can be a mentor.”

Chad Sellers, one of Norm’s sons, took time off from DePauw University when his mother and Norm’s wife (Kim) was diagnosed with cancer and helped coach boys basketball at NorthWood.

Chad, who is three years older than Dillion, used to stand at the bus stop together. Sellers played basketball and baseball as a senior on teams managed by Weldy. He drove him to and from practice and made sure he was included in team dinners.

“We wanted to make him feel like he’s important and a part of the team. He’s not just there for the dirty work.

“He’s a great kid and means a lot to us,” says Sellers. “He always has a big grin and says, “Hi neighbor, how are you?. He never calls me or my dad by our name.”

Chad Sellers notes that when NorthWood was going to play Fairfield in the first round of the 2019 Class 3A Wawasee Sectional basketball tournament, it fell on the same day as Dillion’s annual check-up at Riley.

Knowing he might miss the game, Weldy stayed late the day before and got everything ready to go. Sellers says that shows his courage and character.

“Coach Rise said it was an ‘all-day strike’,” says Dillion. “To me, it looked more like a ball.

“I think of (Risedorph) as a father figure. He’s really inspiring to me.”

Weldy was also recognized during the second Strike Out Cancer Game. NorthWood baseball has teamed with the Jason Motte Foundation the past two years to raise money and awareness to fight the disease.

“We had multiple moms dealing with cancer,” says Risedorph, noting that they had their names along with others connected to NorthWood and Bremen players signed on a banner.

With a heart for service and dedication to the job, Weldy served both basketball and baseball teams for four years and graduated from NorthWood on June 7.

On June 13, Dillion completed another graduation. He went to Camp Watcha-Wanna-Do (a free program for children with cancer and their family and friends at YMCA Camp Potawotami in LaGrange County) as a camper. He plans to return as a counselor.

Dillion, 18, has been released from the neurosurgeon, endocrinologist and oncologist and now follows up with his primary care physician. In February, he saw an adult cardiologist at Riley that said he can do pretty much anything that he wants short of powerlifting.

He was able to be more active during the baseball season, taking throws and feeding the ball to coaches during infield/outfield practice and playing catch.

Dillion was a 10-year 4-H member. His twin brother, Garrett Weldy, was the NorthWood student advisor for Future Farmers of America this past year and was the District 2 sentinel. He is now running for statewide FFA office and plans to attend Purdue University to study Agriculture/Animal Science. Younger sister Kaitlin Lamb just finished the fifth grade.

Great grandchildren surround Anna Belle and the late Dale Weldy. In the front (from left): Nathan Rush, Tanner Rush and Kaitlin Lamb. In the back, Garrett Weldy, Dillion Weldy and Wesley Rush. 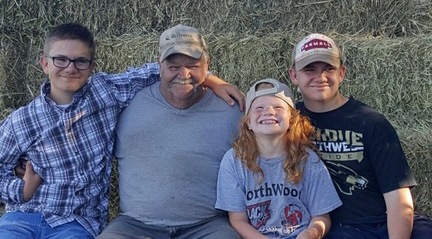 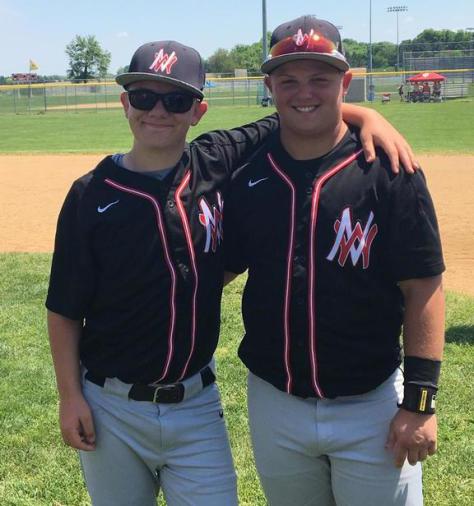 Chad Sellers (left) and Dillion Weldy have formed a strong friendship. They used to be neighbors and Sellers was on NorthWood basketball and baseball teams that were managed by Weldy. Sellers later coached basketball at NWHS with Weldy managing.

A banner was signed by high school baseball players from NorthWood and Bremen at the 2019 Strike Out Cancer Game for the Jason Motte Foundation.

Aaron Wolfe (left) is the head boys basketball coach at NorthWood High School. For the past four years, Dillion Weldy (right) has been a student manager. 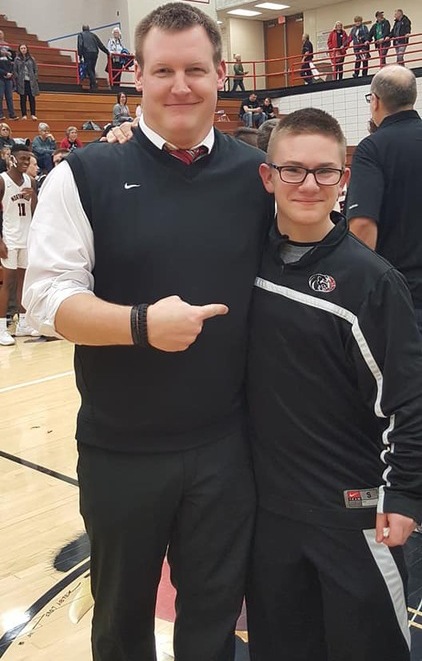