Making consistent contenders and productive citizens is a priority for Brandon Weems as head baseball coach at Pike High School in Indianapolis.

“If we’re ever going to be competitive on a regular basis, we’ve got to get away from just because you showed up, you get to be on the baseball team,” says Weems, who was junior varsity coach at Pike for three seasons then was a volunteer assistant on the staff of Dave Scott at Indianapolis Cardinal Ritter before returning to the Red Devils in 2019 as assistant head coach to Todd Webster. “That’s not the way any of those (MIC) schools are and that’s the reason they are successful. There’s competition within the program. If there’s no competition within your own program, then how do you expect to get them to compete with them other teams?”

Pike won the MIC in 2018 then lost many players to graduation and struggled to win many games in 2019. The positive is that many sophomores got varsity playing time.

“They were the ones that earned it whether they were ready for it or not,” says Weems. “That’s what we had so we rolled with it. We’ll be better off for it because a lot of those guys — by the time they’re seniors — will be three-year starters.

“I’ve had my 1-on-1’s with guys I think will be competing for varsity spots and told them where they stand and what they need to work on. I also gave every one of them an idea of who’s coming up behind them and it’s their job to keep that spot.”

That’s the between the lines. There’s also preparing the young men for their next phase be it college, military or work.

“We want to make sure they’re prepared for what life’s going to throw at them,” says Weems, who served in the Indiana Air National Guard as a weather forecaster and observer for nearly seven years and attended Indiana University Purdue University-Indianapolis and now is an accountant for Indianapolis Public Schools in his day job.

His father — the late Tommy Weems — was a disabled veteran who began coaching youth football while still serving in the U.S. Air Force and coached the Weems brothers — Brandon and Brian — in football and basketball when they were growing up.

“He was not able to work,” says Weems. “I don’t come from a affluent background. I come from the same background as a lot of our kids (at Pike).

“The main difference is that I had my dad. A lot of these kids don’t have their dads.

“They’re going to spend a lot more time with me and my staff. We’re going to make sure we’re leading them not only in baseball but we’re reminding them to make good choices like doing their homework, taking time to go to study tables, getting tutoring when they need it, making sure they’re treating the young ladies the way they’re supposed to. We go into all that stuff.”

Even though Pike — which is part of the seventh-largest school district in Indiana — has three gyms, there are still so many athletes and other students vying for practice space. Many off-season baseball workouts are early in the morning or late at night.

Weems says funding has been approved for a new fieldhouse, which will come in handy in the cold months when the Red Devils can’t practice outside on Hildebrand Field.

Last year, beginning in August through the time of high school tryouts, Weems had players in grades 6-8 come in for Sunday workouts.

“We got a really good turnout,” says Weems. “I got almost a full off-season with our incoming freshmen. I knew who they were. They knew who I was. They understood what the expectations were at the high school level.”

This fall and winter, more free workouts have been twice a month on Saturdays for grades 3-8.

High school players are required to do community service hours and one way they fulfill them is to volunteer to help with the youth players.

Pike fielded a summer team last year that was organized by Weems and ran by assistants to provide a competitive opportunity and to make playing in the high school off-season more affordable. Others played for Little League and other organizations.

“We make it voluntarily,” says Weems. “It’s not that if you don’t play with us (during the summer), you can’t play for us (in the spring).

“It’s what we have to do to compete right now.”

Seems points to Ohio and the ACME Baseball Congress system in place there that provides high school players, coaches and teams an opportunity to continue to play after the high school season ends and is compliant with Ohio High School Athletic Association guidelines.

Weems, 33, hails from Springfield, Ohio, and played at the old Springfield North High School. His class (2004) was the first in school history to win at least 100 games in four years. The Mark Stoll-coached Panthers made it to the district finals (equivalent to the regional in Indiana) three of the four seasons.

He also played in the Babe Ruth League state championship at 13, 14 and 15.

Weems began his coaching career with Springfield North’s freshmen team in the spring of 2005.

“I knew I wasn’t going to be a college baseball player, but I knew I loved the game and didn’t want to be away from it,” says Weems. “I’m an analytical guy. My degree’s in accounting and finance. Baseball kind of lends well to what my strengths are.

“Baseball is one of the last few pure sports that are left because you can’t fake it. When the ball comes your way, you cannot hide. If you’re not trying, everybody’s going to see it.” 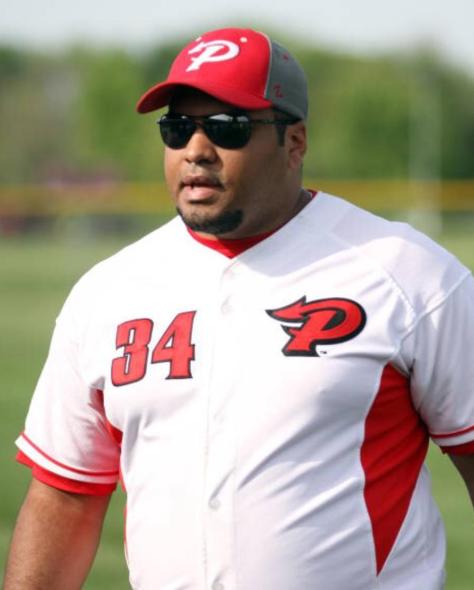 Brandon Weems is the head baseball coach at Pike High School in Indianapolis.