Personal experience has taught Chris Woodruff the value of junior college for a student-athlete and now he’s leading a baseball program at a two-year school.

Woodruff, 25, was named head coach at Ancilla College near Donaldson, Ind., in June and has been busy recruiting and working on the facility at the liberal arts institution of higher learning sponsored by the Poor Handmaids of Jesus Christ.

Woodruff, who has been running events for Elite Baseball Tournaments on the weekends, sees recruiting as a “fun challenge.”

With only a few months to fill a roster, recruiting has really amped up for him.

“Once we begin our fall ball season, we can begin recruiting our 2019 season,” says Woodruff. “We do have a lot of quality guys that return. I’m getting close to my goal. I want to get 30 guys this year and next year, I want to get up to 40.

“The more guys I can have on the roster, the more intrasquads we can do and the more team work we can do here on the field and see what we have in front of us rather having to depend on going somewhere to play a scrimmage.”

Woodruff says he hopes to tap into local talent on the playing side and has already done that for coaching.

“He already knows what I’m trying to bring here,” says Woodruff of Zepeda. “He’ll back my methods and my ways.”

Woodruff has a couple other people in mind to add other assistants.

One of his teammates at Holy Cross was Jake Lanning, who was selected in the 24th round of the 2015 Major League Baseball First-Year Player Draft by the Atlanta Braves and played in the minors that summer.

“I’ve seen and played with a lot of great guys,” says Woodruff.

Woodruff, who played football for coaches Frank Amato and Craig Redman and baseball for coach Adam Zache at Adams, hit .312 with two doubles, one triple, six runs batted in and 20 runs scored in his last season as a center fielder at Glen Oaks.

“I know what kind of junior college played for me — athletically and academically,” says Woodruff. “I can give players the opportunity to come here and play for two years at the college level. In two years, they can improve and develop and leave with their associate degree and go somewhere bigger and better.

“I’m looking for guys who want to come here and work day in and day out and if Ancilla is the right place for them, we can make it work baseball-wise as well.”

Ancilla offers 25 associate degrees and the professor-to-student ratio is low, making for more personal attention. The campus located next to Gilbert Lake and eight miles west of Plymouth.

Indiana has three junior college baseball programs — Ancilla, Vincennes University and Indiana Tech Northeast in Fort Wayne are the others.

Some players and families know how the junior college system works and others are being educated while also being told the merits of Ancilla.

“Each family is different,” says Woodruff. “I have to feed off of them and see where their mindset is.”

Woodruff began his coaching career as a football assistant to Redman at Adams while also finishing his degree in the fall/winter of 2015.

Woodruff then tried his hand at professional baseball in the 2016 California Winter League.

“It was a good experience,” says Woodruff. “All the coaches in that league were (independent pro baseball) coaches or ex-pros and I learned a lot picking their brains.”

Huling was an hitting/outfield coach in Woodruff’s senior year at Holy Cross then brought him onto the IUSB staff.

“I was always a great outfielder and defender, but it was always just natural,” says Woodruff. “I never had anyone teach me. He was constantly getting us to improve on what we did yesterday.

“At IUSB, it was what were we doing as a team to get better that day. Each day, we’re going to improve a little bit.”

Woodruff always wants to get better as a coach and see his atheles make steady progress.

“As soon as you think you know it all, get out of baseball because it’s constantly improving and adapting,” says Woodruff. “There’s so much information out there. Try to just be a sponge.”

At Bethel, Woodruff saw the way Zartman and assistant Kiel Boynton went about their daily business.

“I try to take everything in and that’s what it’s been like this first two or three weeks at Ancilla,” says Woodruff. “I’m constantly learning.

“That’s the kind of team I want to have on the field year in and year out — one that wants to adapt and improve.”

Woodruff, who was hired to a part-time position at Ancilla by athletic director Brian Pearison, has been consulting with groundskeeping guru and longtime family friend Joel Reinebold about getting the Chargers’ playing facility in shape.

“He’s definitely someone I will lean on as I’m getting started and as I move forward,” says Woodruff of Reinebold.

John and Teri Woodruff both have coaching and athletic administration backgrounds but they never pressured their only child to participate in sports.

“They got it right the first time,” says Chris Woodruff. “They just wanted me to be doing something. They’ve definitely been great role models for me and they are the backbone of my support system.”

Growing up, Chris was always around for dad’s softball games in the spring and summer and helped his mother at football games (at Penn High School then Adams).

“I was always around athletics,” says Woodruff. “It’s something I’ve grown to love.”

There’s a whole village that helped me get to this point and I have been to thank,” says Woodruff. “I’m always adapting, improving, learning and growing.” 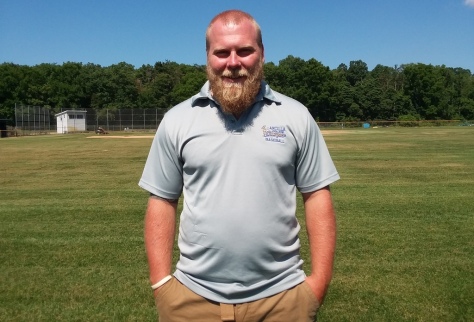