They are thinking big at a little school in Richmond.

Head baseball coach Steve Sakosits came to Earlham College (enrollment around 1,200) from the world of NCAA Division I baseball and he looks to bring that experience with his Division III squad.

“We want to be Division I-esque,” says Sakosits, a 2006 Xavier University graduate who is in his seventh season at Earlham. “I’m trying to recruit Division I type guys.”

Taking things he learned from all three of his college head coaches — John Morey, Dan Simonds and Scott Googins — Sakosits has formed his own philosophy while adopting it to D-III where scholarship money is given based on academics and need.

“It’s fit and finance,” says Sakosits, who notes that D-I baseball has to split up 11.7 baseball scholarships and that Earlham recruits can often get more money when all factors are considered. “We want to recruit students first who have the ability to work hard in the classroom and on the baseball field.”

Pushing the pace in 2017, the Quakers (22-12, 17-6) just clinched a third-straight berth in the Heartland Collegiate Athletic Conference tournament and have a chance to be regular-season champions and tournament hosts.

Four HCAC home games remain — one against Mt. St. Joseph today (May 2) then a three-game series against Hanover (one Thursday, May 4 and two Friday, May 5).

“We’re excited about that opportunity,” says Sakosits of a chance to host four-team postseason play on the turf at Randal R. Sadler Stadium. The HCAC tournament winner is an automatic qualifier for NCAA D-III regional play.

Excitement is what the Quakers bring between the white lines.

Earlham lead all of D-III baseball in stolen bases per game with 3.85 per game and 131 total swipes.

Nate Lynch (41) and Brennan Laird (28) holds down the top two individual stolen base spots while Matt Barger (20) was fourth.

“We’re aggressive in everything we do,” says Sakosits. “We want to dictate the game. We don’t let the game come to us.

“(Our pitchers are) going to give up the free base.”

Sakosits, a 6-foot-5 right-hander as a New Jersey high schooler and at XU (where he made 68 mound appearances from 2004-06), insists his hurlers go after hitters and dictate counts  and the Quakers had 198 strikeouts and 98 walks through their first 297 innings.

Sakosits and his assistant coaches — Brandon Coduto, Beau Smith, Brandon Pennington, Garrett York and Kevin McGee — even time EC players getting on and off the field in practice.

The Quakers are expected to go hard in everything they do — academically and athletically.

“Baseball’s the fun part,” says Sakosits. “It’s just about teaching them how we’re going to go hard and what that means.”

When recruiting, Sakosits looks for hard workers. But he understands that those players may have been the “big fish in a small pond” and got by more on their athletic ability than work ethic.

That mentality becomes a priority once the player is on the Earlham campus.

One of the other D-I head coaches that Sakosits admires in Louisville’s Dan McDonnell and one of his quotes: “If you emphasize it, you’ll be great at it.”

Earlham’s 26-man 2017 roster features 14 who have hometowns in Indiana with eight in Ohio, two in Michigan and two in Kentucky.

When Sakosits arrived at Earlham he started an alumni club and the school began taking donations from alums.

“They’ve bought into the vision of the program,” says Sakosits.

Randy Sadler’s generosity led to the stadium with its turf, video scoreboard and locker rooms and a move away from sharing Don McBride Stadium (built in 1936) with Richmond and Seton Catholic high schools. 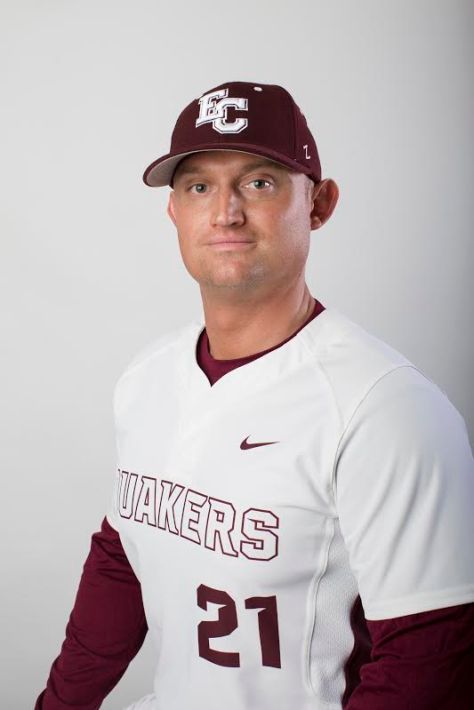 Steve Sakosits is in his seventh season as head coach at Earlham College in Richmond. The Quakers won 21, 26 and a school-record 29 games the past three seasons and were 22-12 going into play May 2. (Earlham Photo)