Glen McClain’s baseball journey has taken him outside northeast Indiana and back.

Since returning, he has thrived on a culture of work and trust make a major impact at Indiana Institute of Technology.

“We have a really good group of guys who like to work,” says McClain, a redshirt junior first baseman/catcher who graduated from Fremont High School and went to NCAA Division I Xavier University in Cincinnati before transferring to NAIA Indiana Tech in Fort Wayne. “It’s great when you can text someone and say ‘you want to go hit some ground balls’ and they’re down. I’d say that’s the greatest contributor.”

McClain expresses thanks for those around him.

“I have a great coaching staff behind me that’s always willing to put in extra work with me,” says McClain. “We have a really good group of guys who like to work.

“I have a really good support system. My mom (Debby) is always helping me out whenever I need something.”

With the Warriors, it’s a matter of believing in one another.

“We all just trust each other,” says McClain. “There’s never a doubt. If I make an error or have a bad at-bat, it’s never in the back of my mind that maybe my coaches or teammates are not going to me.

“I know if I mess up, the next person is going to get it done.”

On Tuesday, April 24 at Parkview Field in downtown Fort Wayne, the 22-year-old right-handed hitter got it done with his bat and legs. He went 2-for-5 with two runs scored in the Warriors’ 5-4 win against crosstown rival Saint Francis.

McClain produced a one-out double (moved to third base on an error) and scored the game-tying run in the fifth inning then stroked a two-out single, stole second base and scored the go-ahead run on senior catcher Tighe Koehring’s single in the seventh inning.

In 2017, McClain started 58 times at first base and set a single-season school record with 101 hits while hitting .455 with nine homers, five triples, 17 doubles and 71 RBI. He was second-team NAIA All-American and Gold Glove winner and a CoSIDA Academic All-American.

In 2016, McClain started 59 games at first base and hit .334 with two homers, three triples, 12 doubles, 33 RBIs while earning honorable mention on the all-Wolverine-Hoosier Athletic Conference team.

“Glen is an amazing player, a great teammate,” says Tech head coach Kip McWilliams. “He understands baseball and the approach. But I can’t speak enough about what kind of person he is. He’s got high character, he’s trustworthy, relatable and responsible. He holds himself accountable as well as his teammates.

“When he came to us three years ago, he was really mature for his age and carried himself with great poise on the field.”

McWilliams recruited McClain when the player was at Fremont. When McClain was released from his scholarship at Xavier, he came highly-recommended by former Musketeers coach and friend of McWilliams, Scott Googins.

“We called Scott and he said he’d be a great player for you,” says McWilliams. “We were very happy to have him.”

McClain went to Xavier as a catcher and wound up having surgery on his right knee, right shoulder and right wrist.

“My body kind of fell apart on me,” says McClain. “I lucked out. Tech was willing to give me an opportunity to kind of bounce back.”

McClain, who is in graduate school working toward his MBA in management after earning a business administration degree with a concentration in sports management, has one year of eligibility remaining.

If he is not selected in the 2018 Major League Baseball First-Year Player Draft in June, McClain says he plans to return to Tech to play and complete his MBA.

McClain credits his coaches at Fremont — Eagles head coach Justin Bock and assistant Chad Baker — with their role in his development.

“They helped me understand my true ability,” says McClain. “I was pretty raw in high school. They really helped me refine.

Travel baseball experiences came with the Mike Hinga-coached Kalamazoo Maroons. Kalamazoo is only about 75 minutes from Fremont.

While Indiana is in the name of the school, Tech’s 2018 roster has players from a dozen different states plus Canada and The Bahamas.

“It’s actually really cool,” says McClain. “We have a lot of kids from California. They add their own swagger to the team. I love the way (San Francisco’s) Dante (Biagini) plays. He’s super intense. I’m different. I’m more of a relaxed kind of quiet. I’m going to keep my composure no matter what’s going on.”

At one point last season, McClain looked up and three-quarters of the infield was from “Cali.”

“I was looking around going, I’m the only Indiana kid on the infield right now,” says McClain. “It’s fun.”

The Warriors are coming down the home stretch of the 2018 regular season. After the Manchester game, there’s a big three-game series at Siena Heights Friday and Saturday, April 28-29 and a home game against Cleary Tuesday, May 1 before the Wolverine-Hoosier Athletic Conference Tournament May 3-8. 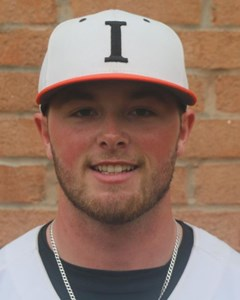