For Cody Mobley, the key to pitching has become a matter of trust.

Rather than trying to blow hitters away, the right-hander in the Seattle Mariners organization has learned to rely on his ability to get hitters out by putting the baseball in the right part of the strike zone.

Mobley, a 6-foot-3, 190-pounder who was selected in the eighth round of the 2015 Major League Baseball First-Year Player Draft by the Mariners out of Mount Vernon (Ind.) High School, experienced a rough beginning to the 2018 season.

A starter throughout extended spring training, Mobley was used almost exclusively out of the bullpen for the Short Season Class-A Everett (Wash.) AquaSox. In his first game — a 2 1/3-inning stint on June 16 — he gave up five earned runs on three hits (one a home run) with four walks.

“I felt like I finished strong. I was limiting my walks more. Trusting myself was the main thing. I was trusting my stuff in the strike zone rather than trying to have people swing and miss.”

Mobley came to appreciate being a reliever.

“I would think too much between starts and that would hurt me,” says Mobley. “I could get in the bullpen, get hot and get in the game and that helped me.”

His curve has been his best pitch going back to his amateur days. The slider developed into a put-away pitch this summer. He calls his slider a “show” pitch, which he seldom uses.

“It’s definitely the pitch that needs the most work,” says Mobley.

“(Quinzer) taught me how to compete,” says Mobley. “He was very winning-oriented.”

Mount Vernon, located in Posey County, lost to eventual 3A state runner-up Jasper in the finals of the 2015 Southridge Regional.

While he considered college right after high school and still has intentions of pursuing high education at some point, Mobley began his pro career in the summer of 2015 with nine appearances (three starts) for the Arizona League Mariners and went 2-0 with a 1.71 ERA, 19 strikeouts and 10 walks in 26 innings then polished things in the fall instructional league.

A partial tear in his elbow limited him to just one inning for the Arizona League Mariners in 2016. He wound up the 2017 season — also in the Arizona League — tired and with shoulder issues. He went back to instructional league and worked on becoming more consistent in the strike zone.

The next steps up the Mariners minor league ladder are Clinton (Low-A), Modesto (High-A), Arkansas (Double-A) and Tacoma (Triple-A).

Born in Evansville, Mobley has spent his life around Mount Vernon. He played in the summers for the Indiana Sharks and Indiana Spikes and then the Evansville Razorbacks when he reached high school.

Cody Mobley is the youngest child by 10 years in a family headed by waste water plant worker J.D. and nurse Nusha.

“I was blessed with really good parents that always supported me,” says Cody. “They’ve always had my back.”

Step-siblings are brothers Adam and Ryan and sisters Mariah and Kasey. 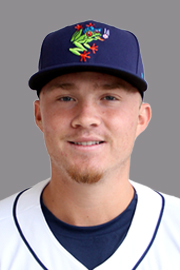