When Tyler VanArsdale was asked to be the varsity baseball coach at Elkhart (Ind.) Christian Academy, the invitation came with a request.

Athletic director Richelle Viront wanted him to establish culture with the Eagles.

VanArsdale, a 2013 ECA graduate who had played baseball, golf and basketball at his alma mater, was a baseball assistant in 2017 and came back to lead the program in 2019.

“I’ve been preaching to the guys to stay humble and work hard,” says VanArsdale. “Humility is so valuable in a team sport.”

VanArsdale, who had also coached many of these same athletes as junior high basketball players, does not put the emphasis on personal statistics but the team.

“We talked about distractions,” says VanArsdale. “One huge one is pride.”

VanArsdale wants his players to know that “everyone matters” and that seniors with experience respect freshmen with little to none.

“When I see someone who is toxic to that culture, we’re addressing it head-on right away,” says VanArsdale. “At the end of the day, ECA baseball is about life development.”

Elkhart Christian lost 4-0 to Fremont in the semifinals of the IHSAA Class 1A Fremont Sectional.

“It was intense and competitive,” says VanArsdale. “I was proud of the guys.”

Two seniors — Bailey Petty and Mark Stevens — were on that squad. Many players return for 2020. Stevens has joined a coaching staff that also includes Tony Tice and Chad Viront.

VanArsdale started his high school athletic career at nearby Penn.

As a sophomore, he transferred to ECA. He was allowed to play junior varsity basketball. The Eagles did not have a JV baseball team, but an arm injury ended his travel season early.

VanArsdale played basketball as a junior and season for squads that won 13 and 14 games.

His senior spring saw ECA go 21-8 and win the school’s first baseball sectional title, reigning at Hamilton and advancing to the finals of the 1A Caston Regional.

That team featured Caleb Stayton (who went on to a standout career at Ball State University) and Tanner Watson (who excelled at Taylor University) and VanArsdale keeps in-touch with many of his former teammates.

A former golf mate of Alec Dutkowski, VanArdale was also able to juggle the links and the diamond in the spring at ECA. He anticipates that he will have some baseball players also competing in track and field this spring.

During the IHSAA Limited Contact Period, the Eagles have been practicing on Tuesdays and Saturdays with weight workouts on other days.

Players and coaches are communication via group chat and VanArsdale, who is also account manager for Legacy Fire Protection, has lunch with his seniors — a group that will have at least six.

“With pitching, we lost Bailey Petty. But we’ll be more diverse and may use three pitchers in a game.”

To keep his pitchers healthy, VanArsdale has them using J-Bands, lifting weights and stretching in the off-season.

For those players who have their sights on the next level, the coach has advice.

“If you have a goal to play college ball, I preach prospect camps,” says VanArsdale. “You don’t want to get worn out on travel ball.”

While ECA (enrollment around 170) is an independent in all sports but soccer now, the school will be part of the Hoosier Plains Conference (with Argos, Bethany Christian, Lakeland Christian Academy, South Bend Career Academy and Trinity at Greenlawn), beginning in 2020-21. It will come with a double robin schedule and end-of-season recognition.

“It’s going to be really good,” says VanArsdale. “It’ll give each school something to shoot for.” 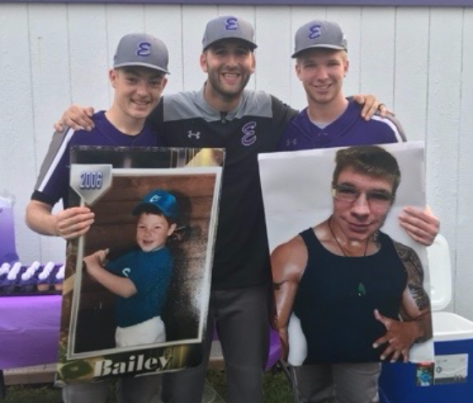