A colleague once referred to Sean Repay as a baseball version of a “Coaching Chamelon.”

It’s a label that Repay embraces.

“I’ve been pretty much darn near everywhere,” says Repay. “I adapt.

“I’m thankful for every stop that I’ve had.”

At Toledo, where Rob Reinstetle is head coach and Nick McIntyre (McCutcheon High School and Purdue University graduate) and Tommy Winterstein are full-time assistants, a big part of Repay’s duties is as camp director. He identifies prospects and brings them to campus. He also coordinates youth camps for the Rockets.

Before the 2020 season was cut short by the COVID-19 Coronavirus pandemic, Repay helped pitching coach Winterstein and also assisted in many administrative details, including making budgets, handling travel details and making practice plans.

“I’ve learned so much,” says Repay. “If you want to do something right and do it at a high level, it’s not just the stuff on the field.”

“We both know how we want things done,” says Repay.

This is Repay’s first Division I experience. For years, D-I programs have been trying to get the NCAA to approve a third paid assistant.

As a D-I volunteer, Repay would like to see the change.

“It takes to run a collegiate baseball program,” says Repay. “(Adding another paid assistant would be) rewarding people that work their tail off non-stop.

“But I knew what I was getting into this season. I have nothing to complain about. I’m 34 with wife and three children. It’s a mindset in how you approach everyday. I do not going to let no pay effect how much work or effort I put into it.”

With his Northwoods League experience, Repay is also charged with placing players with summer teams.

He notes that the Virginia-based Valley Baseball League has already opted to cancel its season because of COVID-19 concerns and other leagues are likely to follow suit, though there is hope that there will be some semblance of a summer season.

“Summer is huge in their development,” says Repay. “Baseball needs this.”

Toledo was on its spring trip in Georgia when the NCAA season was halted.

“This is an unprecedented moment in our lives,” says Repay. “Per the NCAA, we’re not allowed to instruct our guys. But keeping a constant interaction between coaches and players is very healthy thing.

“We check in with our guys to make sure their minds are right.”

Right after the shutdown, Repay thought about his baseball coaching brethren.

“I made a list of people I wanted to call and check in on to make sure everybody is healthy,” says Repay. “(Coaches are) all fighting the same fight. We’re all on stand-by.

Repay commends the coaches that are continuing communication and learning through Zoom conferences and podcasts etc.

“It keeps that knowledge sponge going for everybody,” says Repay. “The more we band together at this time, the stronger it’s going to be when it’s done.

Both his wife (Hope) and mother (Gretchen) are nurses. Hope is an LPN for ProMedica at a clinic working with mothers before and after birth.

Due to Coronavirus precautions, when Hope comes home to Sean, Nadia (9), Maddux (6) and Raeleigh (1), she launders her scrubs and showers thoroughly.

“We stay in quarantine,” says Sean Repay, who resides in Maumee, Ohio. On the few trips out of the house, the family wears masks and gloves.

Gretchen Repay is a nurse manager at Community Hospital in Munster, Ind., and works in intensive care and cardiovascular units.

“(Healthcare) workers out there are doing their best,” says Repay.  “This is a serious time. We have to put baseball aside.

Throughout his career, Repay has built lasting relationships with coaches and players. Part of his “inner circle” includes Ben Reel and he still communicates frequently with the IU Southeast head coach.

“I learned so much in such a short amount of time,” says Repay of his time on Reel’s staff. “He’s helped me so much in my career.”

A right-handed pitcher during his playing days, Reel allowed Repay to run the Grenadiers pitching staff. The team won 37 games, a River States Conference regular season title and finished No. 24 in the NAIA rankings.

“He let me take on every administrative role I wanted to get my hands on,” says Repay. “He was very task-oriented. There was structure. I I knew what I was going to do everyday.”

Bachar also got Repay to think even more about the academic side of collegiate baseball coaching. At the D-III level, there are no athletic scholarships so aid for academics and need really come into play.

As head coach, Bryan Moses took Antelope Valley from a club program to an NAIA power.

Repay appreciates the freedom Moses gave to a young coach.

“He let me off the leash a little bit,” says Repay of Moses, who is now head coach McPherson (Kan.) College. “He let me learn through failure.

“He was such a player’s coach and such a new-school guy. I still take ideas from that season.”

Rick Giannetti became the head coach at Dominican in 1988 and still guides the Chargers program.

Repay had just ended his playing career (McAllen, Texas, Thunder of independent North American League in 2012, Zion, Ill.-based Lake County Fielders of indy NAL in 2011, minor league spring training with the Toronto Blue Jays organization in 2011 and El Paso, Texas-based Desert Valley Mountain Lions of indy Continental Baseball League in 2010) and talked things over with his parents and wife and decided to give coaching a whirl.

“I couldn’t stay away from baseball,” says Repay. “It was a no-brainer to start putting feelers out.”

Gannetti gave him his first taste of college coaching.

“I had to flip the script real quick and change from a player to a coach,” says Repay, who suddenly was learning how to run a pitching staff and recruit D-II players.

One of his pitchers was right-hander Matt Festa, who made his major league debut in 2018 with the Seattle Mariners.

At the time, Dominican played in the only D-II district in the country to use wood bats.

“That’s the way I feel baseball was intended to be played,” says Repay.

Florence manager Dennis Pelfrey had been a coach on the staff of manager Greg Tagert at Gary and invited Repay to be his pitching coach.

“He took a leap of faith,” says Repay of Pelfrey, who now manages in the San Francisco Giants system. “There are some very good arms in (the Frontier League). They are very raw. They might be missing command, need to develop an off-speed pitch or it may be mental. My job was to push them out their door again (toward affiliated baseball or a higher independent league).”

Repay’s relationship with Tagert goes back to him coming to Gary to throw simulated games, though he never signed as a RailCats player.

Growing up in Highland, Repay was very familiar with the Gary franchise from its earliest days in the modern Northern League.

Tagert brought Repay in as a bullpen coach and he got to work with bullpen catcher Aaron Ciaburri, who now coaches at Ranchview High School in Irving, Texas.

“It was such an honor to put on that jersey and work with Greg,” says Repay of Tagert. “Gary is the New York Yankees of indy ball to me. It’s first class. Greg treats everybody with respect. The goal is to win an American Association championship and move everybody up.

“Many of my core principles come from that summer.”

Bisbee was a first-year team when Repay managed the team to a 33-30 mark.

“It was a humbling experience,” says Repay. “I didn’t know what I was getting myself into.”

In that league where five-hour bus rides and small crowds are the norm, it’s all about players working hard to chase their baseball dreams.

“You’re looking at the grinders of grinders,” says Repay.

“He was fun to play for,” says Repay of the man who still leads the Loras Duhawks. “He had a natural relationship with his players. He didn’t sugar-coat anything and installed the will to want to win.

“He’s relentless at everything he does — in a good way.”

When Repay was at Highland (2000-04), Indiana High School Baseball Coaches Association Hall of Famer Dan Miller was the head coach and current Trojans head coach John Bogner was an assistant.

“(Miller) came in with a plan for it everyday,” says Repay. “He was very organized. He was a very good game manager.”

Repay fondly recalls showdowns with Andrean, Lake Central and Munster and how Miller would pump up the intensity and go after the weaknesses of those teams.

“It was a culture of winning,” says Repay. “But it wasn’t forced. He trusted his players.”

Repay and Bogner have maintained communication over the years.

“He’s an amazing human being,” says Repay. “He’s trying to better his players (on the field) and in their lives.” 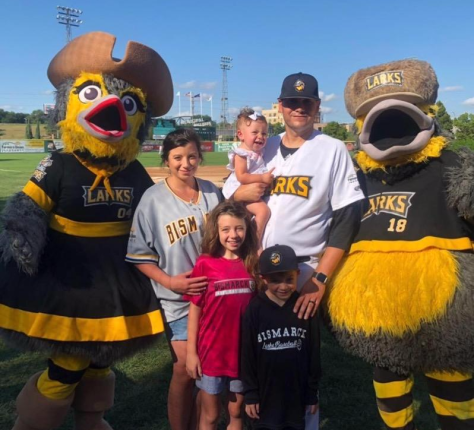 Sean Repay is surrounded by his family and the mascots of the summer collegiate Northwoods League’s Bismarck (N.D.) Larks. Repay, a graduate of Highland (Ind.) High School, managed the Larks 2017-19 and is now a volunteer assistant at the University of Toledo. Sean and Hope have daughters Nadia (9) and Raeleigh (1) and son Maddux (6). (Bismarck Larks Photo)