Indiana University Kokomo wasted little time in getting on the collegiate baseball map.

“I’m really proud of where the program’s at,” says Indiana Kokomo head coach Matt Howard. “We’ve been lucky to get a lot of really good student-athletes to come to IUK that have believed in me and believed in our process.

“We’ve been able to accomplish some pretty cool things pretty quickly. We’re still hungry. We still want to be one of — if not the best — NAIA programs in the state.”

IU Kokomo is a member of the River States Conference. The campus is located along South Washington Street, about two miles south of downtown, where the Cougars’ home field — Kokomo Municipal Stadium — is located.

“I tell guys you get a Division I experience here,” says Howard. “You get a Big Ten degree and facility and get some pretty good coaching as well. The only small-school thing about our set-up is our campus.”

One of the student-athletes that was there from the beginning of the baseball program is Jared Heard. Once a first baseman and left-handed pitcher, he was converted into an outfielder at New Castle (Ind.) High School and began to flourish.

“Everyone sees the impact he has on the field,” says Howard of Heard. “That is not even close to the impact that he has for us. He’s a great guy, great teammate, great leader, great captain. He’s a guy that just does everything the right way.

“Our program is where it’s at largely because of him.”

Howard says he didn’t know that much about Heard when he recruited him.

“We were starting a program and just kind of throwing a wide net,” says Howard. “We were bringing in everyone we thought could be talented and see what we could do with them. Jared turned out to be a diamond in the rough and a guy a lot of other people should have been recruiting.

“We’re lucky that he ended up here. He’s done a great job for us — on and off the field.”

On a team with several new faces this season, Heard is embracing his leadership role.

“On or off the field, you’ve just got to be that guy who’s open to everybody on the team,” says Heard, who chose to come to Kokomo after hearing Howard’s vision. “I thought this was going to be a better fit for me than other schools.

About a month ago, Heard found out that he has a labrum injury meaning he can’t throw and play left field. He has been the Cougars’ designated hitter.

Heard has been used anywhere in the first four or five slots in the IUK batting order, dependent upon and opposing pitcher.

“I’d say around the 2- to 4-hole,” says Heard. “I was the lead-off hitter my freshmen and sophomore year. That was a big change for me. In high school, I was always a 3- or 4-hole hitter.

“(Howard) told me I had a very different swing than some people. It’s not the most fundamental, but it worked and it helped me get on-base.”

Heard says his swing has not changed, but his role has.

“Over the course of time, I’ve gotten bigger and stronger,” says Heard, who is listed at 5-foot-11 and 198 pounds. That size and muscle has led to more power — often gap-to-gap, but sometimes he pops it over the fence.

“He’s a great coach in my eyes,” says Heard of King. “He really helped me out in my pursuit of playing college baseball. I love him to death. He helped me get to where I am today.”

Heard play for various travel baseball teams, the last being the Indiana Bulls coached by Troy Drosche (who is also head coach at Avon High School). 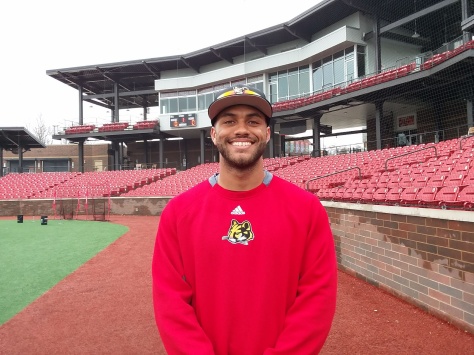 Jared Heard, an Indiana University Kokomo junior, has been with the Cougars since they started their baseball program in 2018. He has become a leader for a team that has already gotten used to success. (Steve Krah Photo)