Logan Brown takes pride in being a contributor on both offense and defense.

Take a recent game for the Florida Fire Frogs at the Daytona Tortugas.

The lefty-swinging Brown produced the go-ahead run in the top of the ninth inning and then went behind the plate in the bottom half to guide his pitcher and the team to victory.

“I got a change-up and doubled over the right fielder’s head and we went ahead 2-1,” says Brown. “We won with our closer (Daysbel Hernandez).

“It’s always nice to help the pitchers out. In the end of the day, they’re the one making the pitches. But I hope they feel comfortable throwing to me. That’s always a big priority to me.”

When his son was age 3 or 4, Kevin Brown noticed that the boy was turning into a lefty. Being a professional catcher himself (the elder Brown was a receiver for the Texas Rangers, Toronto Blue Jays, Milwaukee Brewers and Boston Red Sox between 1996-2002), he let his boy keep swinging from left side but changed him to a right-handed thrower.

Along the way, he played some in the infield. But his primary position was catcher and his high school coach — Paul Quinzer — trusted him to call pitches.

“(Quinzer) was a great coach,” says Brown, who was an all-Southwest Indiana Conference performer after batting .384 as a senior. “He knows you have that kind of potential.”

The trend of letting him call pitches continued for Brown at the University of Southern Indiana, where Jeremy Kuester was the pitching coach and Tracy Archuleta the head coach.

“He’s a fantastic coach,” says Brown of Archuleta. “He wants what’s best for every single player. He knows how to run a program.

“If he knows you can do better, he’s going to let you know. He knows you have that potential. He’ll say things like ‘I know you have more in your tank.’”

Brown notes that many of his minor league teammates and opponents played D-II baseball.

Selected in the 35th round of the 2018 Major League Baseball First-Year Player Draft by the Braves, Brown has continued calling pitches as a professional.

“It’s a lot of reading the hitters and things like that,” says Brown. “It’s more than just throwing pitches. You see how the hitters react to it. You see their swing path.”

The Kissimmee- based Fire Frogs play in the 12-team Advanced Class-A Florida State League. Seeing a team one time is enough for Brown to pick up on hitters’ strengths and weaknesses.

“You can’t get repetitive or they’ll sit on pitches,” says Brown. “It can’t be the same rhythm for every at-bat.

“Throw a throw a question mark in there to confuse them. A 3-2 curve ball is enough to get them guessing.”

Brown’s background in the infield also serves as catcher.

“It translates,” says Brown. “The pitcher may spike a curve ball or slider. You stay through it and pick it.”

With a bat in his bands, Brown looks to make adjustments.

“I know the movement on baseballs is a little better (each step up the minor league ladder),” says Brown. “I’m sticking to my approach. I like to think ‘drive the ball the other way.’ But it depends on what the pitcher is doing as the game and the at-bat goes on.

“To be a good hitter, you’ve got to make adjustments throughout the at-bat.”

In his first 35 games with the Fire Frogs, Brown is hitting .272 with three homers, five doubles and 16 RBI. He his hitting .289 with six runs driven in over his last 10 games.

Brown says he likes to emphasize his strengths and work on what he understands to be his weaknesses during the off-season.

The next two stages in the Braves system are Double-A Mississippi and Triple-A Gwinnett (Ga.).

Though he is not yet sure what the Braves have in mind for him at season’s end, Brown says expects to be in Mount Vernon at some point and helping his father at the Kevin Brown Baseball & Softball School.

Kevin Brown played baseball at USI while Logan’s mother, Rachel (then Murray and now Daniel) played tennis (Logan also played the sport in high school). Logan’s parents have remarried and he has seventh brothers and sisters in the Mount Vernon/Evansville area, ranging from 2 to 20. 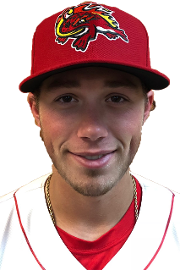