Jay Malott comes from the “old school” when it comes to coaching baseball.

“We’re always intense. We don’t have a problem taking extra bases. We’ll bunt. We’ll do anything we can to win. Pitching-wise, we’ll throw inside and outside.

“The system seems to work and we just pass it down. People say I’m softer than I was when I first started.

After assistant stints at Indiana University Purdue University Indianapolis (with Craig Moore) and Brownstown Central High School, Malott has been coaching in the South Dearborn program for 34 years and is coming up on 25 years of leading the Knights.

Larry Hornbach (who died Dec. 16, 2018) and Mallot are the only head coaches in program history. Mallot has also been a linebackers coach for SD football.

In 2018-19, the Knights were part of an IHSAA Class 3A sectional grouping with Batesville, Franklin County, Greensburg, Lawrenceburg, Madison Consolidated and Rushville Consolidated. With 2019’s South Dearborn Sectional title, the Knights have won 12 sectional championships.

This spring produced a 21-8 mark, a co-championship in he EIAC and a Charlestown Invitational title. South Dearborn lost to Silver Creek in the semifinals of the Jasper Regional.

Malott is a 1977 graduate of Eastbrook High School in Marion, Ind., where his baseball coach was Tim Sumner.

“He was a heck of a coach,” says Malott of Sumner, who went on to assist American Baseball Coaches Association Hall of Famer Ron Polk and coach future big leaguers Rafael Palmeiro, Will Clark, Bobby Thigpen and Jeff Brantley at Mississippi State University.

What did Malott learn from Sumner?

“Probably about everything,” says Malott. “I became a social studies teacher because of him. I tried to coach like him, but personality’s different so it still comes out different.

“Your personality comes out in your players, too.”

The 2008 IHSBCA North/South All-Star Series was held in Evansville and Malott was a South assistant.

“My favorite day is the one where they use the wooden bats and you can see all the kids’ (high school) uniforms,” says Malott. “I’ve been coaching a long time and I get to meet some of the other coaches and tell stories.”

Stepping back on Gary O’Neal Field at Madison brings fond memories to Malott. His South Dearborn team played the Cubs in the sectional championship game in 1999, the year Madison won the 3A state title.

“We played these guys in football, basketball and baseball and six times in Legion ball (Malott coached with South Dearborn American Legion baseball for more than 25 years). I knew most of these kids’ families.”

Ben Reel, the head baseball coach at Indiana University Southeast in New Albany since the 2009 season, played at South Dearborn for Malott.

His assistant coaches in 2019 included, Adam Wheat, Dave Burress, Greg Hughes, Tim Studer and T.J. Schomber. Most of them played at SD for Malott and know the system and are able to pass it along to the high schoolers and those in the junior high program which is part of the Knights feeder system.

Youth baseball in Aurora, Dillsboro, Manchester and Moores Hill as well as select teams in the Cincinnati area (Aurora is 25 miles west of Cincy) help develop players for South Dearborn.

Highlander Park, located adjacent to the South Dearborn campus, is the Knights’ home field. In the past three years, the lighted facility has had a nine-inning scoreboard installed with new dugouts, press box and wind screens.

“We keep trying to update it,” says Malott.

Jay and Teresa Malott have one daughter — Ashley. She lives in Lafayette with her husband and three children. 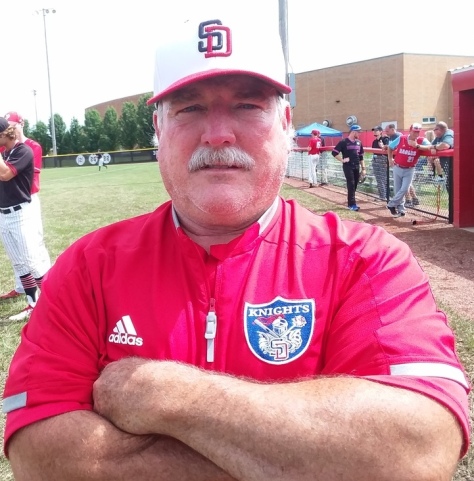 Jay Malott has been coaching baseball at South Dearborn High School in Aurora, Ind., for 34 years and is coming up his his 25th in charge of the Knights program. He was an assistant for the South in the 2019 Indiana High School Baseball Coaches Association North/South All-Star Series in Madison. (Steve Krah Photo)