The senior left-hander knows what it means to face pressure situations and to perform in hostile environments when the Sycamores  go on the road.

At 22 and with 210 collegiate innings logged, Polley does his best to be the calm in the storm. Like the eye in the hurricane.

“We’ve played in some of the biggest ballparks in the country in my time here,” says Polley. “It’s the same everywhere you go.”

Polley, a 2015 Brownsburg (Ind.) High School graduate, was in one of those stressful situations in his last start Friday, May 3 at Illinois State.

“It was one of his best outings in terms of competing and giving us a chance to win the game,” says Indiana State head coach Mitch Hannahs. “I was really impressed with what he did (in the game) with the composure and from a competing standpoint.”

The host Redbirds collected 12 hits against Polley, but he battled for six innings and gave up just three runs in a no-decision.

“There’s always going to be games that don’t go your way,” says Polley. “You have to be able to keep a calm mindset and stay aggressive throughout it all and not fold, which is what the other team wants.”

Polley says it would be easy to get rattled pitching in front of a loud crowd and opposing dugout.

“It almost feels like things can speed up on you,” says Polley. “There was one point in the game (at Illinois State), where I just had to take a step off of the mound, re-group, try to figure out what I was and go at the other team again.”

He credits Hannahs and pitching coach Jordan Tiegs for helping him to develop an aggressive mindset on the mound and to hit his spots.

During winter breaks, Polley has worked with Greg Vogt (founder and operator of PRP Baseball in Noblesville, Ind.) on things like pitch design.

“He’s a really good dude and nice resource that I have,” says Polley of Vogt. “I can pick his brain. He’s a very knowledgable guy.”

Polley has also spent much time on his own doing research online to find the philosophies and routine that works best for him.

“I stick with ti and got about it everyday,” says Polley.

Growing up in Avon, Ind., Polley took the mound in high school as a strong-armed lefty. He later learned the craft of pitching.

Polley credits the Indiana Bulls travel organization for giving him a chance to play NCAA Division I baseball at Indiana State.

He says he’s come a long way since arriving in Terre Haute.

“A lot of it has to do with mentally (maturing),” says Polley. “I was an off-the-wall freshman.

“Once I got here, I knew if I took a step mentally, because I knew I had the physical ability that everything was going to play up.” 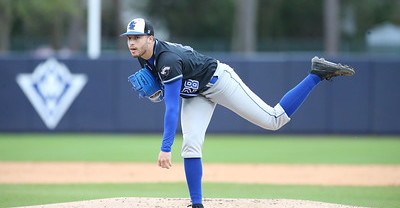