Jake Eaton thoroughly enjoyed his time on and off the baseball field at Anderson (Ind.) University.

Since his last game with the Ravens, the pitcher has been experiencing life as an independent professional player. The 6-foot-6, 230-pounder left-handed pitcher is currently on the disabled list for the Washington (Pa.) Wild Things of the Frontier League.

“Faith has been a vital part of my baseball journey — in large part thanks to my development at Anderson University — and I feel fortunate that I am today in pro ball,” says Eaton, who completed his undergraduate accounting degree in 2015 and Masters of Business Administration with a focus on global business in 2016.

Eaton, a 2011 LaPorte High School graduate, pitched for Anderson in the spring of 2012 and 2013 and underwent Tommy John reconstructive elbow surgery in the fall of 2013, missing the 2014 spring season.

“It was from wear and tear,” says Eaton. “The ligament wasn’t torn. I had just put so much stress on it over the years, it wasn’t protecting the nerve anymore.

“I talked with a surgeon at Methodist Sports Medicine in Indianapolis. I wanted to continue playing baseball.”

Eaton was given the option of skipping the surgery and going through physical therapy with a chance of success at about 45 percent or getting the procedure with an expected 90 percent success rate.

David Pressley was the head coach at AU for Eaton’s first four years at the school.

After Anderson won the Heartland Collegiate Athletic Conference championship and qualified for NCAA Division III regional play in 2015, Pressley went back to his home state of Alabama to coach at powerhouse Madison Academy High School.

“I really grew as a person and player at Anderson,” says Eaton. “I learned to be role model for kids. (Presley) taught me how to be a better man and helped me develop my faith.”

“(Glant) helped me increase my velocity 6 mph in the (2015-16) off-season,” says Eaton. “I wouldn’t have stood a shot at pro ball if he wasn’t there for my last season at Anderson.”

Spending much of his time for seven years studying, playing or working out around Anderson, Eaton also was employed part-time doing accounts payable and receivable for Reflectix, a stock reflective insulation manufacturer.

Eaton’s pro path has included stops with the Gary (Ind.) SouthShore RailCats of the American Association and Tucson (Ariz.) Saguaros in the Pecos League in 2016 and the AA’s Salina (Kan.) Stockade (which played all its games on the road) and Washington in 2017. He signed with the Wild Things in July, made 12 appearances (all in relief) with 1-0 record, one save, 2.21 ERA, 23 K’s and seven free passes in 20 innings and was re-signed in October for the 2018 season.

An ulnar collateral ligament (UCL) sprain near the same area where he had Tommy John surgery has kept Eaton out of action so far this season. He got a Platelet Rich Plasma (PRP) injection and is back in LaPorte, where is working out and going through exercises to improve his wrist grip and forearm strength.

“I’m working on my core, cardio or legs — or a mix of them,” says Eaton of his regular gym sessions. Just this past week, he began doing light biceps and shoulder work.

It’s all about building strength back up around his left elbow.

Eaton says he expects to begin throwing again around July 2 and report back to the Wild Things a week after that, though the “diehard Indianapolis Colts fan” did plan to be in Washington to see former NFL Pro Bowl punter Pat McAfee play for the Things at It’s All About the Warrior Field at ConSol Energy Park.

Eaton has been following the team’s game on video streaming.

Four pitches are in Eaton’s arsenal — four-seam fastball (he does work on a two-seamer during bullpen sessions), curveball, slider and “circle” change-up from the three-quarter overhand arm slot. He was consistently clocked at 86 to 89 mph on his heater while touching 90 a few times last season.

“As a left-hander, I can get away with a lot more than a righty would,” says Eaton.

But he has learned that there is a drastic difference between facing D-III and professional hitters.

“You have to use a lot more off-speed going into pro ball,” says Eaton. “Sometimes, you can blow it by them in D-III ball. (Pro) hitters a lot better at adjusting.

“They are good at picking up on your mechanics. That’s like smelling blood in the water for the hitter. They see it’s going to be a off-speed pitch and sit back on it.”

Upp is credited for teaching Eaton about always having an aggressive approach to the game.

“You can’t go in with a soft approach,” says Eaton. “You have to attack everyone.”

One thing Eaton appreciates about the Wild Things is that they are not as likely to swiftly cut someone after a few sub-par performances or for the promise of a better player.

“They stick by you and trust you and give you a sense of security,” says Eaton. “As long as you do everything to your full potential.

“That’s why we usually have such a good clubhouse. Guys can get close and don’t have to worry about leaving the next day.”

Eaton doesn’t mind the distance from home with the way he is treated.

“It’s well worth it playing for a classy organization like Washington,” says Eaton, who grew up in LaPorte and played in the local Cal Ripken and Babe Ruth baseball leagues, beginning at age 11.

His summer travel baseball experience included the Indiana Breakers in 2010 and Plymouth American Legion Post 27 in 2011.

Summers during his college days, were spent working a job and working out.

Eaton counts work ethic as his best quality as an athlete.

“I’ve always got a focus and a plan going into my workout or my day,” says Eaton. “I know what I need to do to get better.”

Jake is the son of Steve Eaton and Terri Wainscott and has a older half sister named Nikki.

His father is a retired from more than 40 years as a bricklayer.

“I mixed a lot of mortar for him over the years,” says Jake of projects around the house.

His mother is a registered nurse. 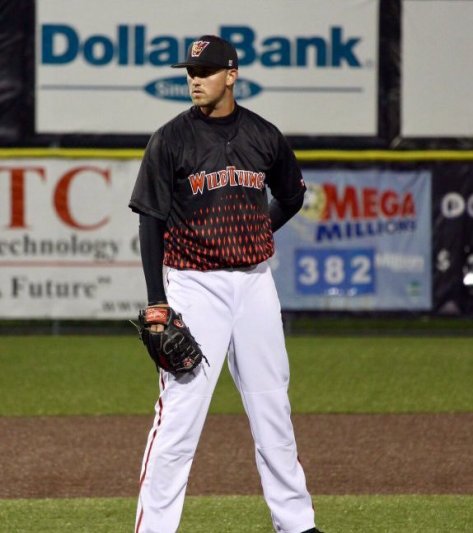